Square Enix and developer Airtight Games are taking their time with Murdered: Soul Suspect, an original mystery game for the newest generation of consoles and the PC. They unveiled the game at last year’s Electronic Entertainment Expo video game trade show, and now they’re giving a hands-on peek at the first hour or so of the title.

I’m glad to report that the game has made a lot of progress since I last saw it. It still has some bugs. But the version I played was much better than last year’s prototype. I liked this game because it had an original premise where death is just the beginning of the story.

The noire-like game opens with Ronan O’Connor, a detective in Salem, Mass., being thrown out of a fourth-story window by a mysterious hooded figure. He gets up and tries to get back in the building but finds that his body is still on the ground. He is a ghost, and his physical body is fading fast. The hooded figure appears, grabs Ronan’s gun, and then shoots him seven times. Ronan realizes that he is dead, and his mission is to solve his own murder.

That’s a compelling opener for a very different kind of video game, which is full of suspense but not horror. The “dusk” world that Ronan’s ghost inhabits is a kind of purgatory. Ronan has to resolve his own issues as a ghost before he can move on to the afterlife. It is a dangerous world, but not one with the traditional kind of combat that you find in most games.

Murdered: Soul Suspect was so refreshingly different that it was one of my favorite games previewed at E3. But critics who were pickier than me found fault with the lack of interactivity and the sense that it was more of a movie than a game.

“We made a lot of tweaks to it, but it’s still the same fundamental game,” said Matt Brunner, the chief creative director at Airtight Games, in an interview with GamesBeat. “It’s an investigation game where you’re trying to solve your own murder.”

I wouldn’t say that the experience is as rewarding as my top games of last year — The Last of Us and BioShock Infinite. But if the developers bring this big project home, it will bust open a new genre of non-combat mystery games that are relatively rare among triple-A productions. I think it has every chance to be as compelling as last year’s favorites. 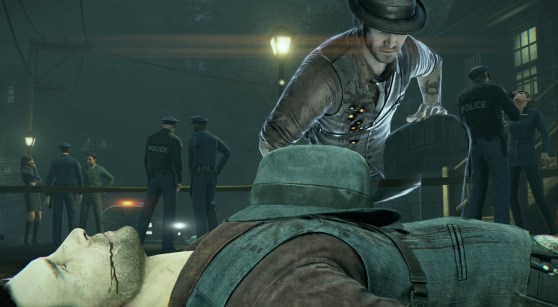 Ronan realizes that he’s a ghost and is looking at his dead physical body.

As Ronan, you have to get used to being a dead guy. You have no physical form. You can’t talk to the living or move things in the real world. You run into other ghosts in the limbo world of “the Dusk,” which has a fuzzy, murky, dusty feel to it. As a ghost, you can see the living. But you also see the shimmering, specter-like forms of other ghosts in the Dusk. Some of them will talk to you and plead for help. That leads you on side stories that take you off the critical path.

If you want, you can ignore the other ghosts and focus only on solving your own murder. But if you help the ghosts resolve their problems, you learn more about the history of the place, about Salem, and find clues that may help you.

Ronan’s brother shows up at the scene, so the story introduces characters among the living. And it introduces characters among the dead, including Ronan’s girlfriend, who died earlier. Last year, there was no mention of the girlfriend, but her presence in the cinematics of the opening scene paints Ronan, a tough-guy detective, in a different light. He wants to be reunited with her, but she tells him he must solve his own murder before he can move beyond the Dusk.

In the opening episode, you find that there are advantages to being a ghost. You can slip into the bodies of the living and possess them. You can read their minds and eavesdrop on their conversations. You find that one of the cops really hates you because of your chequered past and that he’s glad you’re dead. You can influence real people to do things, like move paper so that you can see what is underneath it. That helps you find clues. And if you’re a good detective, you’ll pursue every thread since you don’t know what clues will be important.

When you discover a clue, you add it to your collection. Once you collect all of the clues around the crime scene, you reconstruct what happened. If you guess correctly which of the clues are most relevant to your murder, then you solve the puzzle and are able to move to the next scene. You can make a guess before you have all the clues, but if you guess wrong, there is no huge consequence. You simply won’t get a perfect score in your game achievements.

Once you solve the first puzzle, you can move inside the building to find out what is on the fourth floor. But as soon as you get inside, you run into another ghost. She was murdered and wants to know why. You can solve that mystery by looking around the first floor. I meticulously searched through the whole floor. That’s not the typical behavior you have in a game. Most gamers are in a rush to find an answer, solve a puzzle, or head into combat.

In this game, you have to search and think. It’s not survival horror, said Naoto Sugiyama, the executive producer of Murdered. You don’t get jumped in the dark or have to blast your shotgun at flesh-eating zombies. But it is scary, dangerous, and suspenseful. The reason why it’s different from your standard horror or combat game reflects a lot of thought.