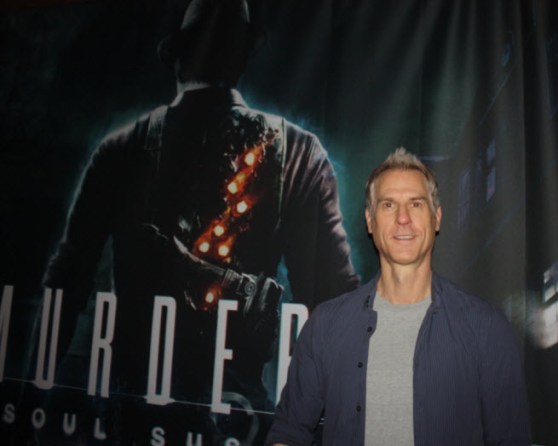 Above: Matt Brunner of Airtight Games

The design decisions that made Murdered come together

When Square Enix began working on the game years ago, its ambition was to expand beyond its Final Fantasy role-playing games, which were strong in Japan, and expand to content that appeals to Western audiences. It partially succeeded with last year’s release of Tomb Raider, the reboot of the Lara Croft franchise. But Murdered is a bet on a brand new story and intellectual property. 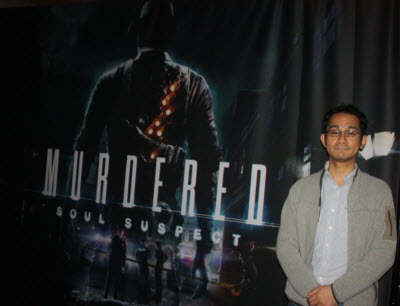 Above: Naoto Sugiyama of Square Enix

The idea originated with Yosuke Shiokawa, the creative director at Square Enix, who was inspired by the movies Die Hard and Ghost. What would happen, he thought, if ghosts could communicate across the life-death barrier? And the Bruce Willis character from Die Hard would still try to protect his wife even after he died. The plot of the game was unchanged: to have the ghost, Ronan O’Connor, solve his own murder.

So Sugiyama and Shiokawa teamed up with Quantum Conundrum developer Airtight Games to flesh out the idea. They toiled for a long time, trying to get the gameplay and story right. Among the problems was differing interpretations between the Japanese and the Americans about how ghosts should behave. They settled upon an approach in 2010, Sugiyama said, and they have been in production ever since.

“It was a loose idea, so there was a lot of freedom in the development process,” Brunner said. “The process about melding the Japanese sensibility with the American sensibility about what a ghost behaves like was rough. It took us a good year and a half to get that sensibility.”

The key to the design came with the creation of the character, Ronan. He was a tough detective who got himself killed and didn’t know why.

“That really began to resonate with us,” Brunner said.

The team had to think about the core gameplay that would support the fantasy of being this character. That led to the notion of building the game around investigation and finding clues. The world had to have danger for both emotion and engagement. That was where the narrative and the gameplay came together. The design decisions grew from the core idea and the core character, like layers being added to fulfill the experience.

The game is set in Salem, Mass., the site of the Salem witch trials. It gave the game its distinctly American flavor, and it brought in a rich supernatural history as the backstory that could hold the game together, Brunner said. The small-town setting allows for focused investigation scenes. This isn’t a giant, open world where you can go anywhere. The first hour of the game takes place inside the single building and the crime scene surrounding it.

With the Salem history, pieces of the story fell into place. The ghosts can’t go inside all buildings. They are blocked from going inside “consecrated” places, so they have to find an open window or walk into a building by following a human being who goes inside. So ghosts can move around inside buildings, but they can’t get out of them or into them so easily. The space where they can operate is contained into a kind of arena. The ghosts can’t just run away from every fight or enemy. 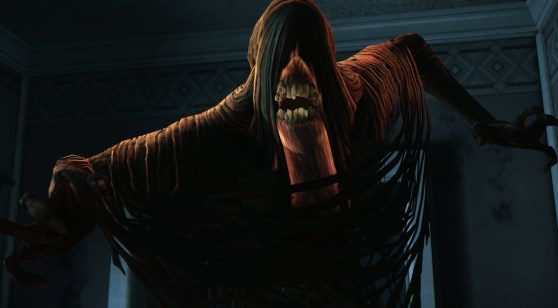 Above: Demons haunt the Dusk world and will kill your ghost if you aren’t careful.

Fighting with demons: the trickiest part of the gameplay

One of the dangers of being a ghost is that you aren’t invulnerable. You can be destroyed by demons like the one pictured above before you find your way out of the Dusk. That means that you have to think about what you do before you act. The first demon appears on the second floor of the building as you walk up the stairs. You have to flee. You can press the right bumper of the controller to glance through a wall to see if the demon is lurking there. If you sneak up behind the demon, you can kill it using a quick controller maneuver. But if the demon turns around, it will grab you.

The gameplay also has a stealth element, too. There are ghostly mists that you can hide in to escape from the demons. You can move from mist to mist in order to maneuver away from the demon. You can imagine that this cat-and-mouse game between hunters and the hunted could be used in multiplayer, but the game has no multiplayer, Brunner said.

“I don’t think of it as combat at all, and we don’t want to turn this into a combat game,” he said.

The point of the demons is show you that the Dusk is a dangerous world. There are enemies that you have to stay away from as you try to find clues.

Once you make it past the demons on the second and third floors, you can finally get to the apartment you’re looking for. A flashback shows that Ronan was responding to a burglary call and surprised the hooded figure. The hooded figure is supernaturally strong, and he starts throwing Ronan around. Then he throws him out the window. At that point, the flashback ends, and Ronan has to look around the apartment for clues.

He discovers that a girl came into the apartment and was hiding just as Ronan surprised the intruder. The girl flees during the fight. Once Ronan picks up clues about the person who lives in the apartment and solves the puzzle, he can proceed in search of the girl. When Ronan leaves the building, he has an opportunity to help another ghost with another side quest. The interspersing of these side stories with the critical path of the main story will keep the explorer in you engaged.

But Brunner said the team held back from staging epic combat battles. That helped slow the pacing of the game to fit the investigative gameplay. Of course, the designers didn’t want the game to be too slow-paced and non-interactive, like a movie.

“You really need to have moments of peak adrenaline,” he said. “But the question was how to make the investigation more engaging, to make the player think. We made changes to the smallest things during the past year that helped make the game more interactive.” 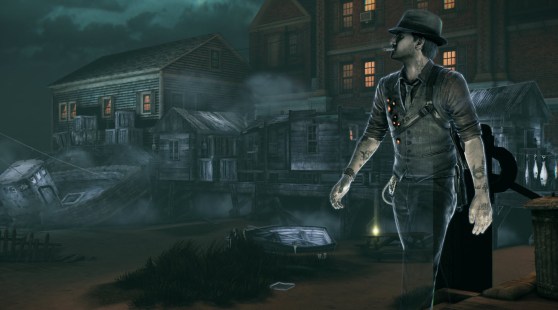 Above: Ronan roams among the boats as he solves a side quest.

That was all I got to see of the game. But I’m very excited to see more and to play it. I like the original thinking behind the making of the game, and I’m interested in the situations that Ronan will explore and the story that he unravels. I’m also intrigued by the side stories that delve into the history of Salem, and I’d like to know what kind of capabilities the ghost can develop over time. If the team follows through on its vision, it should have one of the most interesting games of the year. 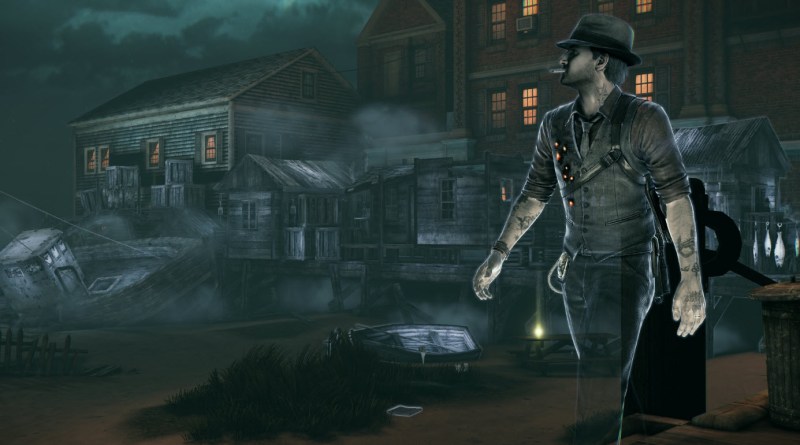 Above: Ronan roams among the boats as he solves a side quest.