Collaboration and chaos. TwitchPlaysPokémon embodies both at the same time. But it’s almost over already. As an army of 50,000 players prepares for Pokémon Red’s final dungeon and bosses, several entrepreneurial Twitch broadcasters have applied TPP’s crowd-play format to other games.

TwitchPlaysPokemon is a social experiment that permits tens of thousands to enter commands for a single game of Pokémon Red. They are all trying to play the same single-player game at once thanks to its programming being integrated into video-streaming website Twitch’s live stream and chat functions.

GamesBeat asked Kevin Lin, the chief operating officer of Twitch, via e-mail whether the company ever expected its platform to enable something like TwitchPlaysPokémon. “We are used to our community pushing the boundaries of what is possible with live video, but the creativity behind TwitchPlaysPokémon and its ensuing level of engagement was definitely not something we could have predicted,” he said. “TPP has created its own genre. By enabling millions of people to collaboratively play a single character in a game, their perceptions of the experience have resulted in a narrative laden with mythological, philosophical, religious, and political overtones that could only happen organically. This is an unforgettable happening that could only exist on Twitch.”

Lin is referring to the TwitchPlaysPokémon channel’s over 30 million views and how it has become a cult phenomenon, with a massive community on Reddit crafting its narrative in real time with memes and slogans. With such dramatic success, it’s no surprise that TPP has inspired a handful of interesting spin-offs. 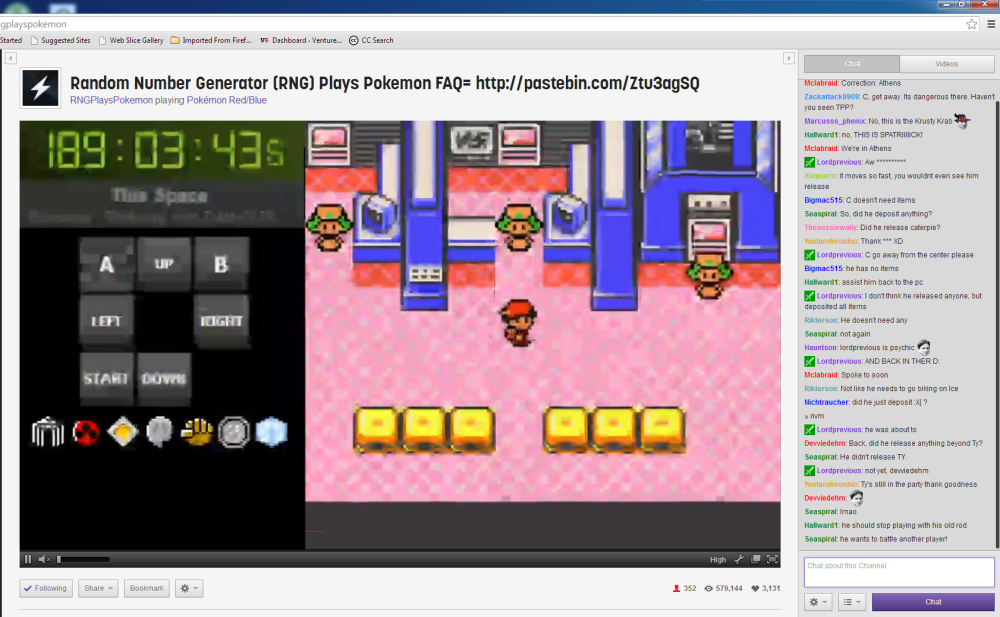 Above: Don’t release your party, C! Get out of the Pokémon Center!

We’ll start close to home with the Pokémon copycats. GamesBeat is aware of two that have gained significant traction. The first is TwitchPlaysPokémonYellow. It’s basically a clone of TwitchPlaysPokémon, except the community plays the later Yellow version (which adds Pikachu as a starter Pokémon) instead of the original Red/Blue.

Far more interesting is the channel called RNGPlaysPokémon. RNG stands for random number generator; this Twitch stream hosts Crystal (an updated version of Gold/Silver for the GameBoy Color in 2000), controlled by random numbers converted into commands. In a totally opposite setup from its crowd-controlled predecessor, viewers of the livestream have no capability to control the events in the game.

GamesBeat talked with the channel’s creator through Twitch’s private message function. When asked about his inspiration, he said, “When me and my friends were watching TwitchPlaysPokémon, I jokingly said that the outcome of the inputs was pretty much random when that many people are spamming and that someone should set up a RNGPlaysPokémon for laughs. The next day I set it up, and viewers started dropping in, and before I knew it, it had over 1,000 viewers.” Next, we asked him what his goal is, and he replied, “To see how well random inputs do in Pokémon games. It takes a while for it to get somewhere, but with some patience and an awesome community, it becomes a great journey!”

It has indeed become a great journey, with seven of Crystal’s 16 badges already earned.

Some caveats make this accomplishment less impressive: First, the computer-controlled game is running at about 375 percent of the normal speed. Second, it has slight programmed-in biases toward certain commands (and if necessary, toward the direction of the current goal) to make it a little less random and a little more efficient when it comes to going through the game. And the channel maintains a list of interventions that the community voted on to keep the game from being stuck indefinitely. So far, they have agreed on nine interventions in 185 real-time hours.

Still, RNGPlaysPokémon is something special. Without any need to contribute to the game, chatters simply watch and socialize, as I witnessed one viewer asking how another’s exam went. Others make clever comments about the game, like Cydas4, who said, “I can’t wait to see what C [the main character] uses his Master Ball on.” It’s the element of absolute unpredictability that keeps RNGPlaysPokémon so interesting. It can also make it tense, such as when C runs around in a Pokémon Center, the threat of him releasing his monsters looming overhead (he’s done it before). Or it can be pretty funny, such as C frequently calling his mom or investigating his Old Rod for no reason.

Viewers often talk about C as though he were a real person, and as if they identify with his struggles to overcome mundane tasks like navigating a ledge for hours. For example, a Twitch user said that C spent hours talking to an in-game character because he “misses [him] sometimes.” They frequently urge him on, like a bunch of sports fans yelling at their favorite team.

Best of all, the channel continuously plays upbeat electronic and hip hop music. Yes, I enjoyed researching and dancing in my chair at the same time. 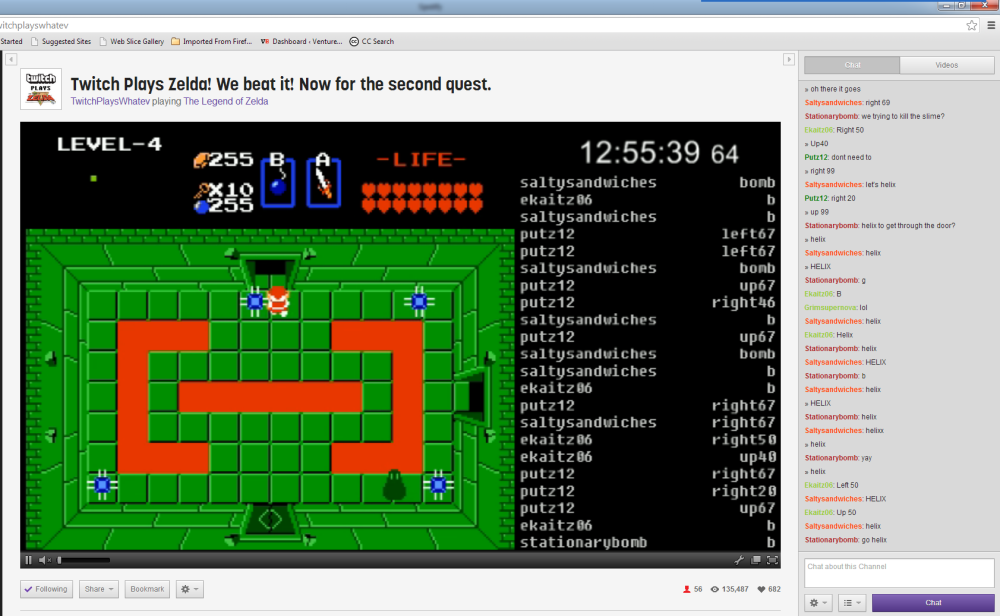 Above: With infinite health, navigation is more difficult than survival.

The Legend of Zelda is an even more difficult and action-based RPG than Pokémon. It is much more difficult to complete by the ever-so-slightly-controlled chaos of many players at once. Is it possible? Gamesbeat contacted the creator of the TwitchPlaysWhatev channel, Zach Gerlock, who worked hard to stack the odds in favor of success. Writing about his reaction to TwitchPlaysPokémon, he said, “My initial reaction was, ‘I could do that,’ so I figured I should. But I wanted to add an extra challenge. Pokémon just happens to be perfect for the format, so I selected Zelda as there are a lot of hurdles to overcome to make it possible. I knew I’d have to find some innovative solutions, but fortunately, I have found them.”

The community controls Gerlock’s modified version of Zelda, which gives Link unlimited health, bombs, and rupees (money). He removed access to the “start” command, which would normally open the menu, because the only way to close the menu is to press “start” again, and hundreds of simultaneous “start” commands could get the game stuck. He even programmed a workaround to allow using an item just by typing its name, eliminating the need for the menu.

For a while, the community was at the mercy of the dreaded Wallmaster, a monstrous hand that grabs Link and carries him back to the start of a dungeon no matter how far he’s progressed. Because of an inability to get past this foe, Twitch Plays Zelda was stuck on the first level. In Gerlock’s own words, “Wallmasters were the last major hurdle. If you get hit by one, they drag you all the way back to the start of the dungeon, and obviously, it’s hard to avoid getting hit in this format. We would get past it eventually without extra intervention, but it would take so long that people would surely lose interest. The first Wallmaster room was the only time I directly cheated. I just turned off enemy collisions manually after they failed on it for about 8 hours straight.”

That was Tuesday. As of yesterday, the group has already completed The Legend of Zelda, an impressive feat. Now it is hard at work on the game’s “second quest” mode, a harder and slightly different version that unlocks after completion of the normal mode.

Yes, you read that right. Someone has adapted one of the most classic of classic video games for communal play.

Super Mario Bros. isn’t like Pokémon or The Legend of Zelda. The latter two are role-playing games, while Super Mario Bros. is a platformer. One of the biggest differences in gameplay between these genres is the fast-paced precision required to navigate past jumps and enemies in platforming games. For many gamers, SMB can be a real challenge even during solo play. Trying to coordinate a large group to successfully get through its levels seems impossible.

When GamesBeat first checked out TwitchPlaysSMB, the channel displayed a screen saying that it was undergoing maintenance. It said to “check back momentarily for resumed gameplay.” That was on Monday, and now it shows a new message which redirects traffic to another channel called TwitchEntertainmentSystem. All that’s left of TwitchPlaysSMB is a recorded video of the completion of World 1-1. GamesBeat did learn about measures taken to increase the likelihood of success thanks to the page’s FAQ. The livestream’s creator said, “It took Mario only 527 deaths to reach the first checkpoint [of the first level]. However, 6,520 deaths later, the first level still could not be beaten.” The solution? They gave Mario a Super Star bonus (basically, make him invincible to enemies) for the first 10 seconds of each life.

As for the new TwitchEntertainmentSystem channel, it currently has no livestream going. Its archive of past broadcasts consists only of 23 attempts to start Twitch Plays Sonic the Hedgehog 2. It looks like none of these attempts caught on to nearly the same extent as TwitchPlaysSMB’s 5,000-plus views and 1,000-plus followers, the closest having five views and 15 followers. 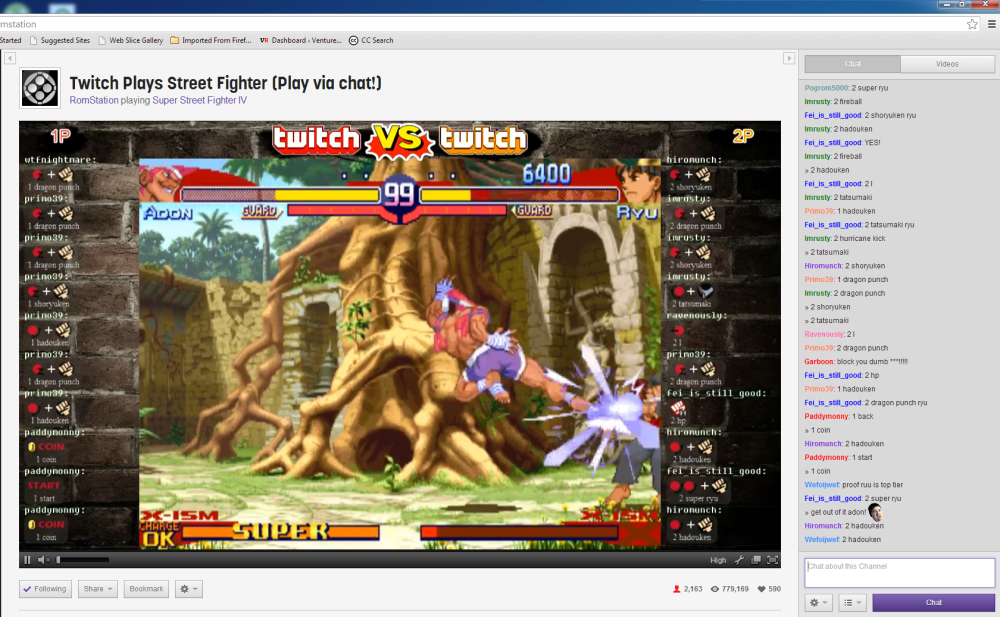 Above: A surprisingly skillful attack considering the 20-second delay.

Twitch Plays Street Fighter is unique because of its built-in competitive element. It is a two-player live stream of Street Fighter Alpha 3 on Twitch channel RomStation. Anybody watching the stream has the capability to input commands for either of the two characters currently fighting. So basically, the crowd is competing against … itself. Included in the commands are all of the combos for each character. Typing in the name of a combo to activate it is much easier than pressing the correct combination of buttons needed in the original game. Matches can be very exciting, since the outcome is so dependent on the commands of so many users. Anyone can switch sides or join the match at any time, and though I’ve never seen it, I’m sure sabotage is possible. The only problem holding Twitch Plays Street Fighter back from truly being great is an annoying delay, which its page says is about 20 seconds. It’s hard to play strategically when you’re 20 seconds behind the actual game. 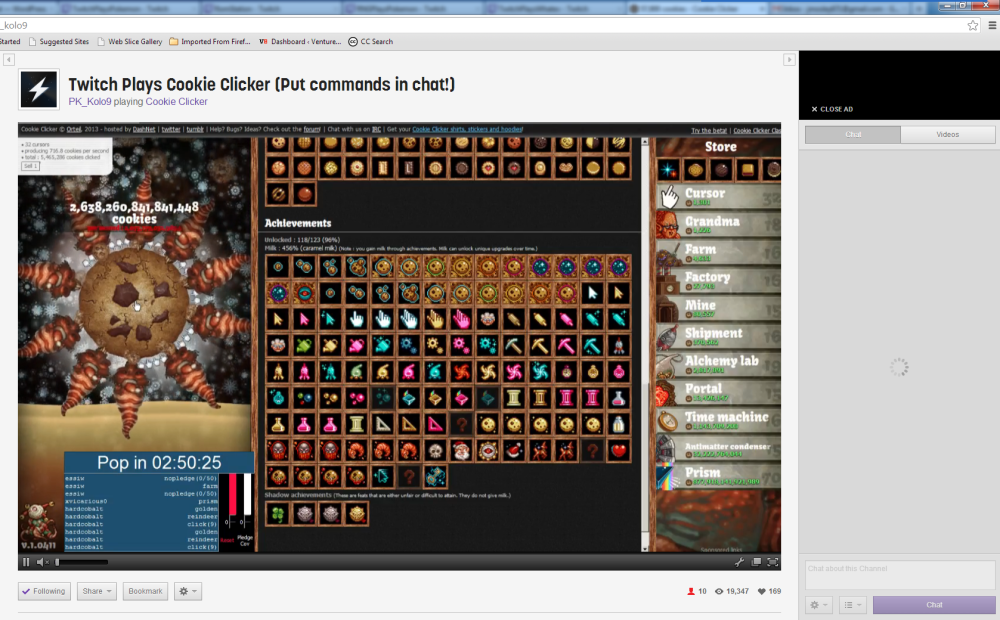 This one is pretty bizarre. Cookie Clicker is a browser game that tasks players with clicking on a giant cookie in order to bake cookies and investing in upgrades to automatically produce more of the treats. Seriously, the only goal is to bake as many cookies of possible. No end exists. The Twitch channel PK_Kolo9 enables many people to input commands at once, sending the number of baked goods to ridiculous heights. It looks like altogether, Twitch has managed to create over 40 sextillion cookies. It’s too bad they’re not real. …