Swords and guns. It’s hard to find a game without one or the other. But some developers are thinking a little harder about how we blast away the bad guys.

Dustforce has players sweeping dust and attacking enemies with a broom. Tomb Raider’s Lara Croft can sink an ax into her foes and a cliff wall. And titles like Mike Bithell’s upcoming stealth game Volume and Harmonix’s first-person music-shooter Chroma use sound as offensive and defensive tools.

GamesBeat spoke with the developers of these titles to uncover how thinking smarter about weaponry benefited their games — and what it can do for others.

Dustforce, a platformer for PC and more recently PlayStation 3, PS4, and PS Vita, is an unusual case: It’s not often that games ask players to pick up, of all things, a broom and start cleaning floors and ceilings thick with dust. Dustforce’s players have to eliminate the “dust bunnies,” too — any enemies or obstacles that might get in their way.

“We had always talked about wanting to make an agile, fast-paced platformer,” Terence Lee, one of Dustforce’s developers at Hitbox Team, told GamesBeat. “[Designer Woodley Nye] was sweeping leaves off the path at my uncle’s house in Texas, and the idea came to him. It wasn’t quite Dustforce until we came back to the idea a lot later, but the core idea of having to clean the surfaces was the same.” 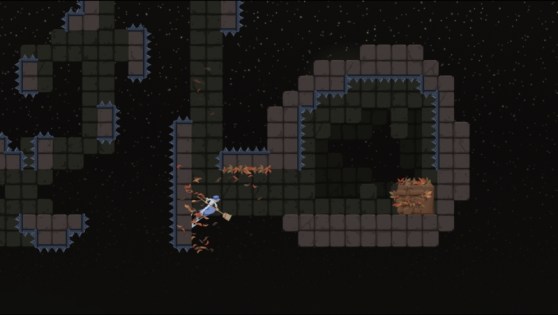 Above: Dustforce challenges your platforming /cleaning skills by handing you a broom.

Once Hitbox decided on the janitor theme, the whole design took off. Dusty surfaces would guide players and lead them forward like a trail of bread crumbs, said Lee.

“For example, the idea for the trashcan enemy that fires trash bags came naturally once we knew we had a city environment with trash to clean up,” he said. “Other than that, the influence was mostly on the aesthetics. There’s something cathartic about cleaning up, and we tried to convey that sense of peace through the visuals and audio.”

Lee was surprised by how fast-paced Dustforce became. The broom acted as a constraint that helped the design happen naturally, he told us.

“The prototype was originally more about agility and traversing tricky situations,” Lee said, “but once we added sloped surfaces and played around with the movement a lot, we discovered all sorts of cool speed-boosting tricks that added another layer of depth that made the game more exciting and challenging.”

Lara Croft had a lot of weapons at her disposal in last year’s action-adventure reboot Tomb Raider, but one managed to become particularly central to her growth as a character.

The ax isn’t just a melee weapon. Through a series of upgrades, Lara can use it to pry open doors, slide down ropes, and scale rocky cliffs. And in many ways, it’s a narrative tool: It changes with her. The more she masters the ax, the more she starts to feel less like a scared young woman and more like a believable, capable survivor. 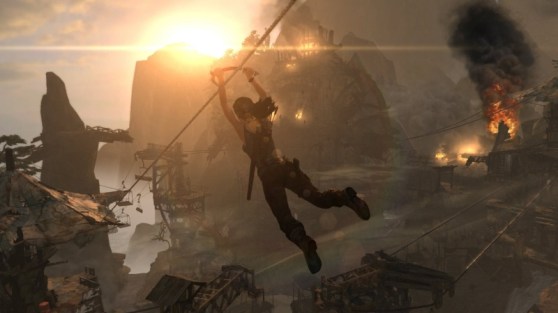 Above: The ax is critical to Lara’s dominance over her environment.

“The team looked at something that could be personal for Lara — an extension of her — so we wanted a melee-style weapon but not strictly a weapon,” said Scot Amos, the executive producer on Tomb Raider (and the newly released Tomb Raider: Definitive Edition) at developer Crystal Dynamics.

“The climbing axe opened up traversal as well as lock-and-key puzzles in many ways,” he said. “… Since we knew the progression of the climbing ax’s power from a hand crank to a pry-bar to its core purpose as a climbing tool, we could shape the world’s progression cleanly with the gear [upgrades].”

The ax starts as an ordinary object, but like Lara, it becomes much more versatile later on. She learns how to upgrade the ax so she can explore new areas and find once unattainable secrets. The island, which once held horrors in its depths, becomes her playground.

“As a tool, it showcased Lara’s ingenuity and her ability to salvage what was around her and turn it into something useful,” said Amos. “As a weapon, it lent a somewhat desperate feel to the combat, which supported the fact that Lara is not a skilled combatant. She is outnumbered and outgunned on the island and must use scrappy tactics to turn the odds in her favor.”

Volume: A stealth game ‘about being heard’

Upcoming stealth game Volume doesn’t actually have any weapons in the traditional sense. But that helped indie developer Mike Bithell (of Thomas Was Alone fame) think more creatively about its design.

“As the game’s evolved, it’s picked up a bunch of ways of playing with sound and visual awareness of A.I.s,” Bithell told GamesBeat. “Almost everything in the game makes sound, so you have to bear that in mind and plan your stealth accordingly. Likewise, enemy vision is clearly defined.” 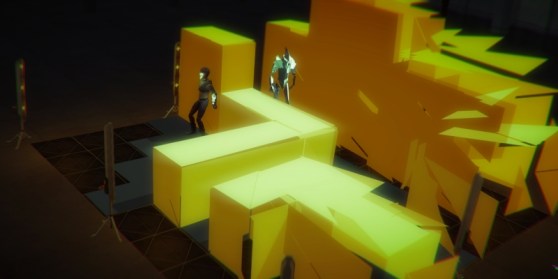 The enemies can’t die — only the player character — which means you have to make sure your actions don’t alert them unless you want them to.

“The second you remove death, enemy presence becomes permanent, which changes how you do things a bit,” Bithell said. “Everything becomes about herding and interrupting the A.I. rather than clearing them. At the same time, the environment for the player becomes about giving opportunities for movement and hiding. That’s been fun to work out and create gameplay around.”

Bugles, blackjacks, thunderclaps, and veils — these are all names that players will come to know. They’re all tools at their disposal. For example, the blackjack, which Bithell says is “as close to a weapon as the game gets,” knocks out enemies for a few seconds.

“The bugle is probably my favorite gadget in the game, a ricocheting projectile which makes a sound wherever it gets to in the level,” Bithell said. “You can be super-clever with its use and make awesome distractions for your enemies. It’s a real crowd-control tool.”

In Volume, sound — the same thing you want to minimize so that enemies don’t hear you coming — becomes your greatest advantage. Chroma, the upcoming music first-person shooter from Rock Band developer Harmonix, is much the same way. “Music is your weapon,” the tagline reads.

“It’s like fighting inside an MP3 visualizer,” Chroma senior designer Ken Strickland told GamesBeat. Introducing music to an established genre like the first-person shooter is a license to rethink conventions and experiment, he said. 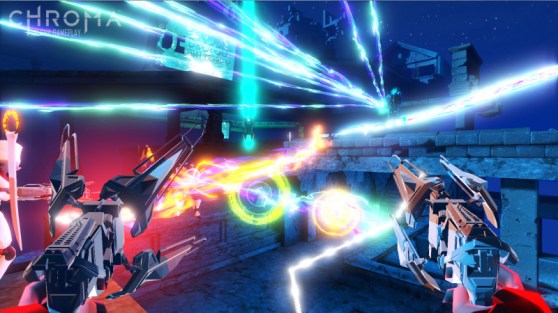 Above: Chroma (in alpha) challenges players to create music and shoot foes at the same time.

“It took us awhile, but we had to stop thinking of Chroma as an FPS where explosions just happened to play music tracks,” said Strickland. “We had to start thinking of every game event — from footsteps to jumps to weapon fire — as something that naturally occurred in musical time. That’s rough when your expectations are hardwired toward immediacy — we had to and still are working hard to make that musical alignment feel natural instead of something you’d perceive as lag.”

Chroma isn’t bound to realism like other shooters, Stickland said. Grenades can explode over multiple beats. And the whole definition of movement has changed.

“We’ve tied all sorts of gameplay events — like whole sections of the map moving, scoring events on certain game modes — to song sections,” he said. “If you can anticipate musical time, you can outplan your opponents just as you would if you had memorized a physical map or gotten incredibly good at the art of the grenade bounce.”

Weapons in a first-person shooter are how we interact with its world, said Strickland. Good weapons matter.

“If you’re trying to hybridize two genres but don’t reach all the way down into the player’s toolbox, your combination is going to feel like a pastiche — a patina over what’s essentially the same experience,” he said.

“Besides, if you think about it, each weapon is essentially a statement on how a player should play your game — a thin weapon set means there just aren’t that many routes to success in what you’ve built.”