If you publish quality web content, you’re going to get scraped. Unsavory characters who want content on which they can sell advertising spider your content, lift it, and publish it as their own. 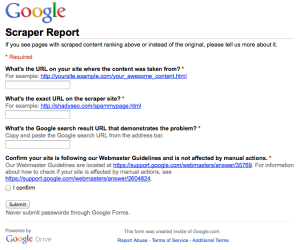 That’s how I write on such esteemed sites as da6nci.com.

Yesterday, Google announced a tool to combat that, called the Scraper Report, which allows legitimate site owners to report sites that are stealing their content and publishing it as their own. SEO and Google expert Matt Cutts announced it via Twitter, and as ad expert Larry Kim of WordStream noticed, hilarity ensued.

Because, according to some, Google is the biggest and best scraper site on the planet. 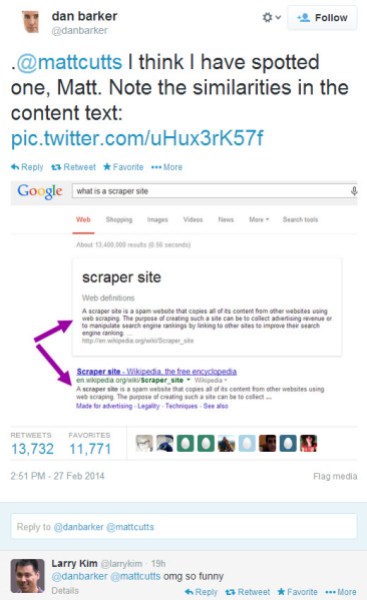 Dan Barker, an e-commerce and digital marketing expert, pointed out via a simple screenshot that Google scrapes vast swathes of the Internet, especially Wikipedia. Kim retweeted it — the first to do so — and thousands followed. As of Friday morning, Barker’s original tweet has over 14,000 retweets and almost 12,000 favorites.

One joker, Mariano Amartino, had an interesting idea of what to do with the tweet:

@danbarker @mattcutts LOL… I´ll make a tshirt of this and take it to the next “AdSense Partners Summit” :P

The key point here, of course, is not just the immediate comic value of Barker’s response to Matt Cutts, who commands almost god-like reverence and fear among search engine optimization and online marketing aficionados. The key point is that Barker hit on precisely the pain point that online marketers are feeling vis-a-vis Google, which by far dominates the search landscape and therefore sits at the epicenter of every search marketer’s world.

With its constant algorithm updates that attempt to improve the web search experience for most of us, Google inevitably hurts some sites on a regular basis — such as JC Penney a number of years ago, which the search giant whacked for scammy-looking links. Rap Genius found itself on the wrong side of Google’s wrath for much the same reason just recently.

Most of the time, the results are probably better for most, but sometimes Google’s actions seem arbitrary, self-serving, and unfair.

In this case, Barker is perhaps suggesting that Google take some of its own medicine.