Mystery is a giant genre in movies and books, but not so much in hardcore video games. Square Enix and developer Airtight Games want to change that with Murdered: Soul Suspect, an original mystery game for the newest generation of consoles and the PC.

They unveiled the game at last year’s Electronic Entertainment Expo video game trade show, and they showed me an hour-long preview of gameplay this week. I found this noire-like game to be quite fascinating. It opens with Ronan O’Connor, a detective in Salem, Mass., being thrown out of a fourth-story window by a mysterious hooded figure. As a ghost, Ronan realizes that he is dead, and his mission is to solve his own murder.

After the playable demo, I interviewed Matt Brunner, the chief creative officer at Airtight Games, about Murdered: Soul Suspect’s history and the design decisions that the team made in order to create a different kind of suspenseful experience. Here’s an edited transcript of our interview.

GamesBeat: So we just played through about an hour of the game, maybe? 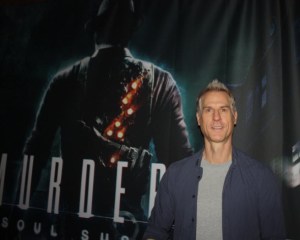 Above: Matt Brunner of Airtight Games.

Matt Brunner: You played through it a lot more thoroughly than most. I think you missed a couple of things, but for the most part, you saw it all.

GamesBeat: It’s intriguing. It holds your attention. It seems like you’re going for keeping someone focused through mystery, or suspense.

Brunner: Absolutely. The core of this game is a mystery. It’s an investigation of a mystery and solving a mystery.

GamesBeat: You’ve been with the project since the start. Can you describe some of the process, what it’s been like?

Brunner: Honestly, we started out with just the idea of wanting to make a game that was based around a ghost as the main character. We explored a number of different avenues around that. Some of them were almost superhero stories, and others very much weren’t.

When we landed on this idea of a policeman who got killed in the line of duty, in this sort of cavalier action, and then needed to find out who had killed him and why — he has no idea, when he first almost blunders into it. That really began to resonate for us.

We took that and said, “What’s the core gameplay that needs to support this fantasy of being this character in this world at this time?” That brought us to the idea that it was about investigation – uncovering clues and making sense of those clues.

Then we began to add in more dimensionality to it. What’s the world surrounding you? Why is it interesting? How can it be relevant to what you’re doing? How dangerous is it? Adding a bit of danger, for both narrative and emotional spice, helped a lot to give it peaks and valleys as you went through it.

GamesBeat: Square Enix creative director Yosuke Shiokawa came up with the idea a few years ago. It was at a time when Square Enix had an ambition to go beyond their core Japanese audience and Final Fantasty, to find a more worldwide audience. Was there something interesting to you about that part of the project as well?

Brunner: When they came to us, it was a very loose idea. It was literally just a game about being a ghost. So there was a lot of freedom in the development process. It wasn’t a fleshed-out idea that we just had to put into practice.

The process of melding a Japanese sensibility with a western sensibility about a ghost story was kind of rough, to be honest with you. There are a lot of assumptions that we weren’t even aware of, that we were making on both sides, about how to fictionally support who you are as a character in this world. It took us, I would say, a good year and a half of constant back-and-forth to get that sense of, “What, really? Oh, so that’s what you’re talking about.” 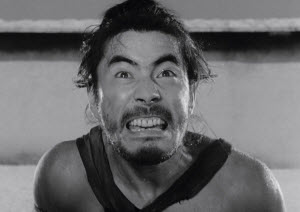 GamesBeat: The things that come to mind from my side on the Japanese front would be things like Rashomon, where you’re actually having conversations with dead people, raising their spirits and talking to them. But when you start talking about Salem, for Westerners that brings up a completely different kind of lore, the witch-trial lore. It seems like a big gap to get across.

Brunner: Salem bubbled up out of several narrative ideas that we’d come up with and developed. It resonated strongly with us for a number of reasons. It gave us a smaller location that we could develop a lot within, because we didn’t want to turn this into a big rambling story about moving from place to place. It was more about characters and interacting with those characters and exploring a smaller, more detailed space. That worked well for us. It also has this rich supernatural history, which immediately worked for the ghost fiction.

I remember some of the early concept work that we started doing. I think we did some that took place in a larger city, and no matter what you did, it didn’t feel like a ghost game. A skyscraper and a ghost don’t go that well together. So we pulled it into that world for a number of reasons, both for visuals and for narrative structure.

To the broader point, there’s definitely—Shiokawa-san’s sensibilities are there as far as trying to bring a certain vision. But the entire team has been charged with trying to make that relevant to a global audience. You won’t find it falling in line culturally with what a Japanese ghost story would be.

GamesBeat: The advantage to the basic idea is that every culture has ghost stories.

Brunner: That’s one of the big elements, yeah. Until we incorporated that, and you crossed the threshold into that scary territory—there were lots of problems to solve when we did that. But before that, it didn’t feel like you were a ghost. It felt like you were a transparent physical character.