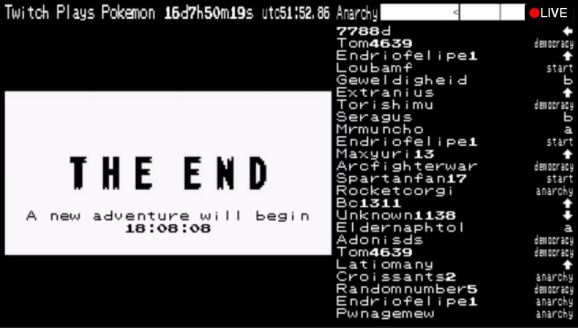 The adventures will continue tomorrow morning.

Early this morning, Twitch Plays Pokémon beat the game, but that’s not the end of the journey.

After more than 400 hours, thousands of gamers working in unison (and just as many working to sow chaos) completed the entirety of Nintendo role-playing game Pokémon Red for Game Boy. More than two weeks ago, an anonymous Australian programmer set up the Twitch Plays Pokémon channel on the livestreaming site. It enables anyone to control the onscreen action by entering commands into a chat window. Now, he revealed the future of the experiment relies on the continued interest of the community:

“For as long as there’s still interest, I’ll continue to run the stream.”

“I’m going to transition to the second-generation Pokémon games,” the mysterious programmer said. “I haven’t revealed which game specifically. There’s currently a countdown timer showing on the stream that is ticking down to when it starts.”

That timer is counting down to about 4 a.m. Pacific on Sunday.

The second generation of Pokémon titles includes Pokémon Gold, Silver, and Crystal. Gold and Silver debuted for the Game Boy Color in Japan in November 1999. The English versions hit North America in October of 2000. Crystal came out in the following year. These games introduced 100 new Pokémon as well as the Johto region.

Twitch Plays Pokémon inspired a number of interesting stories and copycats. Viewers came up with their own religions based on the events of the stream, and other Twitch streamers used the popularity of the channel to introduce their own spins on the concept. Meanwhile, the person in charge of Twitch Plays Pokémon tells GamesBeat that he wants to try other community-based gaming ideas on the livestreaming site but is too preoccupied with Twitch Plays Pokémon for now.