Boxed in by rivals in video games, Nintendo outlined its plan to redefine itself as a health-oriented entertainment company in the coming decade. In a letter to shareholders, Nintendo chief executive Satoru Iwata said the company plans to expand beyond games to make entertainment that improves “quality of life” for people.

It is a risky strategy to expand beyond video games at a time when its core business is losing money and rivals like Sony, Microsoft, and mobile companies are gaining ground on it. But it’s also the kind of “blue ocean” strategy that Iwata has tried before — something that worked with the Wii console, which recorded more than 100 million in worldwide sales during its life.

Iwata talked about Nintendo’s history since its founding as a seller of Hanafuda, or traditional Japanese playing cards, 125 years ago. It innovated and shifted to becoming a toy company, then an electronic toy company, and then a video game company. Nintendo launched its first game console, the Nintendo Entertainment System, in 1983. Its Wii console in 2006 was a big success, but the Wii U has been a disaster, and the 3DS handheld isn’t selling as many as its predecessor, the DS.

So to adapt to the shifting market, Nintendo is expanding into health. 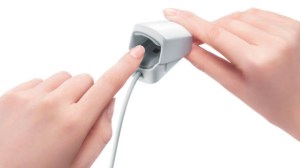 Above: The Nintendo Vitality Sensor.

Back in 2009, Nintendo hinted at a health entertainment strategy when it announced a “vitality sensor” that could measure your heartbeat and input that data into a Nintendo Wii game. But Nintendo never shipped that sensor.

Health tech is a rising, competitive field in the U.S. But to compete in it, Nintendo not only has to deal with competitors with more knowledge and more experience in the sector, but it may also need to learn how to work with the U.S. Food and Drug Administration. (Ask 23andMe how that went.)

He said that Nintendo will still remain focused on dedicated video game hardware and software platforms.

But he added, “We will attempt to establish a new business area apart from our dedicated video game business. We have set ‘health’ as the theme for our first step and we will try to use our strength as an entertainment company to create unique approaches that expand this business.”

While Nintendo continues to lose money, investors and analysts have clamored for the publisher to get into the mobile gaming business. But this is something the Japanese company has denied it’s doing. Others have talked about it acquiring or merging with other game companies.

Nintendo wants to expand its base of users, much like it did with the Wii, whose motion-sensing controller was so easy to use that it appealed to people who weren’t traditional video game fans. With its new health products and services, Iwata said that Nintendo wants to “create an environment in which more people are conscious about their health and in turn expand Nintendo’s overall user base.”

“What has remained the same from the past is that we have always tried to create something new from materials and technologies available at that time, to position entertainment as our core business and to improve people’s QOL in enjoyable ways,” Iwata said. “We will continue to value self-innovation in line with the times and aim for growth.”