Zynga is launching a new mobile version of its FarmVille 2 game aimed at positioning the embattled social-gaming publisher for the next generation of smartphone and tablet games.

FarmVille 2: Country Escape is a “mobile first” game with only small connections to its desktop counterpart, and it’s part of the company’s effort to reimagine its Facebook games for the fastest-growing, multibillion dollar gaming markets in mobile, said Jonathan Knight, the vice president of games at Zynga, in an interview with GamesBeat. 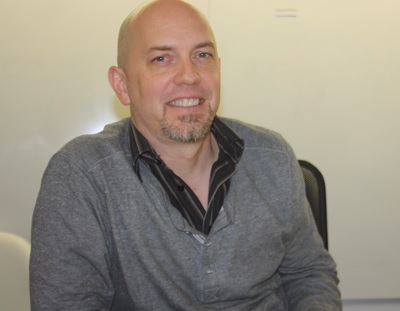 Above: Vice president of game Jonathan Knight of Zynga

More than 400 million people have played Zynga’s FarmVille games, but most of those have been on the PC. On mobile, Zynga has struck out, leaving room for rivals like Supercell’s Hay Day — and leaving the former social games giant struggling in a mobile-first world.

“We’ve created an opportunity for a company like Supercell with Hay Day by not bringing FarmVille to mobile,” admitted Don Mattrick, the chief executive of Zynga, in an interview with GamesBeat.

Farmville 2: Country Escape will be available by the end of the second quarter for Android and iOS (it’ll hit Amazon’s Kindle at a later date). The title has been in a soft launch with some external testing.

The new game picks up a lot of the improvements that Zynga made to FarmVille with the launch of FarmVille 2, and then it makes them work in a more contained space of a mobile device and a touchscreen interface. On mobile, you get to enjoy the more leisurely life of running a small farm on the seaside. It’s like an escape from your bigger farm on the Web.

“It is a fun, charming escape,” Knight said. “You can tend and nurture things. That is the core of why farming games are so popular.”

FarmVille 2 is still Zynga’s top game, with a ranking of No. 15 on Facebook’s monthly active user ranking list. That’s a good rank, but FarmVille used to dominate the charts in 2009 and 2010 after reaching more than 80 million monthly active players. In the fourth quarter of 2013, FarmVille 2, Zynga Poker, and FarmVille represented 62 percent of Zynga’s revenue.

“We are reimagining social gaming for mobile,” Knight said. “We want to do it in the right way, working on mobile first. It is connected to the web game and is a logical extension of it. It’s a big deal for us.”

Zynga has tried to make mobile games before based on the original FarmVille (FarmVille and FarmVille Express), but they weren’t successful in the same way as its Facebook games were. But Zynga’s doing something different with this new mobile push: It designed the play sessions to be shorter, and the mobile game is a stand-alone title.

The gameplay resembles FarmVille 2. It should run at 60 frames per second on the iPad Air, or 30-frames per second on low-end tablets. It has animations like ambient movement, weather effects, animals that move and behave in a cute way, and planes that take off. Country Escape is built on top of Unity 3D game engine, with custom changes. And you can play the game on different devices — your farm is in the cloud.

The games are connected because it’s easy to run out of water in FarmVille 2. That causes you to either buy some water or wait for it to regenerate. With the Country Escape mobile game, you can generate water and then send it via truck to your web farm in FarmVille 2. Sugar, a key ingredient that you can use to make goods that you sell on your farm, is something you can get from friends. You can take wheat and turn it into flour by combining ingredients. Then you can make pies that you can sell. In that respect, the gameplay is similar to FarmVille 2.

“We want to innovate around accessibility,” Knight said.

The game is social in that you can get your friends to help on your farm. You can actually pick up your friends and put them in an area so they can work. If you put them by the pond, they will start fishing and add value to your farm with the fish you catch. You can use a built-in chat system to talk with friends. And you can join a farming co-op with a bunch of players. That makes it easier to get ingredients that you need.

You can unlock things like Sophia’s wine tasting table, where you can buy and sell wines. The premium currency is a key, which you can use for a variety of purposes.

“We’re being very careful with this one,” Knight said.