If the idea of battling a zombie aborted fetus bothers you, South Park: The Stick of the Truth is not the game for you.

But if you enjoy outrageous and shocking humor, much like the kind South Park has featured for years on cable TV, you’ll have plenty of laughs if you play The Stick of the Truth, which is out now for Xbox 360, PlayStation 3, and PC. More surprising, however, is just how accomplished it is as an actual game.

South Park mostly practices two kinds of humor: shock-based stuff that challenges the politically correct norm of modern entertainment and social satire often tackling sensitive issues. The Stick of Truth leans more toward the former, with plenty of moments that’ll widen your eyes and have you laughing like a middle schooler hearing their first dirty joke.

Really, I could give you dozens of examples of shocking moments, but I don’t want to lessen their impact. Just trust me when I say that even having watched hours of South Park, I was still surprised by just how far the game went. I mean that in the best way possible, since I’m not above laughing at an inappropriate poop joke or two … or three.

But South Park’s best humor comes at the expense of other games, with moments clearly parodying scenarios and tropes from popular franchises like The Elder Scrolls, Final Fantasy, and BioShock. The satire is dead on, but it also comes from a place of love. The Stick of Truth affectionately pokes fun, but it’s never done in a mean-spirited way. 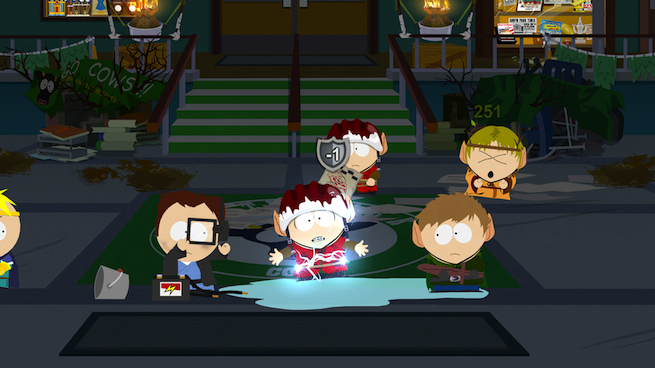 Above: The Stick of Truth looks exactly like an episode of “South Park.”

You’re probably not too surprised that a South Park game is funny, but it’s the mechanics that actually elevate The Stick of Truth to greatness. At its core, this is a turn-based role-playing game in the style of Final Fantasy or Dragon Quest. You and your opponents take turns whacking and farting on each other until one side is dead.

While that sounds familiar, the battles have some surprising depth. Like in the Mario RPGs, combat as a bit of a rhythm to attacking and defending. Push the right button at the proper time, and you’ll do some extra damage or weaken the impact of an enemy’s hit. Special abilities offer even more variety, like stuttering Jimmy’s bard move that turns into a Guitar Hero-like minigame.

Status ailments, buffs, and debuffs also play a big part. Enemies can have layers of shielding, which absorb one attack each before disappearing. You can also weaken your foes by grossing them out, making them bleed, pissing them off, or setting them on fire. Opponents can also enter stances that counter melee or ranged attacks, so you have to constantly keep track and switch your plans accordingly.

All of these systems add up to a lot of fun. Battles never feel like a chore, and you don’t have to waste time healing your party after every encounter since you regain all of your health and PP (which you need to use the clever, class-specific abilities) after every fight.

Even outside of combat, The Stick of Truth has a lot of puzzle elements involved in exploration. These usually require the use of certain skills, like farting and teleporting (because those go so well together). Not only will you depend on these to get through certain areas and find treasure, but you can also defeat enemies using environmental triggers and negate the need to fight them fairly.

The Stick of Truth seems to reference just about every South Park episode ever. One of your goals is to make as many Facebook friends as possible, which basically turns into a character scavenger hunt. Not only is it fun to walk around a completely open and explorable South Park, but gaining friends also earns you perks in combat, mostly enabling you to deal extra damage under certain conditions (like if you’re low on health or if your target is on fire).

But seriously, if you can think of a famous character or joke from the show, you’ll likely find it hidden somewhere. And while that sounds a bit pandering, you never get tired of finding hidden references or running into familiar faces.

The Stick of Truth looks like an authentic episode of the show — one you’re in control of. And even without the combat, you’ll have an incredible amount of fun just wandering the town, talking to the citizens, and searching for collectibles.

Like most RPGs, you gain experience points after winning battles that can help your character level up, increase stats, and strengthen your arsenal of special moves. Oddly, however, The Stick of Truth ends your progression after level 15, a number I hit even when I had a couple of hours left in the campaign.

Keep in mind, I wasn’t grinding enemies for experience. This was just the level I naturally reached after playing through the main story and doing as many side missions as possible. Thankfully, you can still power up your character by finding new equipment and unlocking perks via making friends, but I’m not sure why the game caps your progression so soon.

The Stick of Truth is surprising. Not only is it a great South Park game, but it’s a fantastic RPG in its own right. The plot has enough ridiculous twists to keep you engaged, and the battle system offers enough variety to keep encounters from growing stale and tiresome. Meanwhile, fans of the show can get lost just exploring the town and searching for references to their favorite episodes.

This is one of the greatest licensed games ever made. Unless you’re easily offended or hate the show, you really shouldn’t miss it.

South Park: The Stick of Truth is out now for Xbox 360, PlayStation 3, and PC. The publisher provided GamesBeat with a code of the PC version on Steam for the purpose of this review.