With its Project Spark creation game, Microsoft has a big opportunity to capture the imagination of gamers and bottle it. If it succeeds, Spark could build for Microsoft a user-generated community akin to the phenomenally popular block-building title Minecraft — if it strikes the right balance.

Players will be able to use Project Spark to design their own game characters, worlds, and virtual objects. It has to be easy to use so that anybody can create, but it also has to be deep and flexible enough so it doesn’t limit creativity. Microsoft will soon find out what happens when it turns over the keys to the car to its gamers. The open beta test is live today.

Above: Team Dakota, the makers of Project Spark.

There’s a lot at stake in coming up with this magic formula for accessibility and creativity. If it works, Microsoft’s own gamers will build a sharing community, which they can sustain by creating much more content than Project Spark’s own developers, dubbed Team Dakota, can themselves.

Spark is ambitious because it is designed to run on anything from a PC to a huge touch-screen television. You can use an Xbox One with Kinect to insert your own image into a virtual landscape or sweep your hand over a Surface 2 tablet to populate it with trees. The title will be free-to-play so that anyone would be able to pick it up and play with a minimum of friction. The creative action is more like sculpting, not coding.

The title is still in closed-beta testing, and players are creating all sorts of cool game worlds, such as Star Wars or Harry Potter fan games. Many world-building publishers want to duplicate the success of Mojang’s Minecraft, which has more than 100 million registered users. But that has been particularly difficult.

I visited Team Dakota’s headquarters in Redmond, Wash., where leaders like creative director Henry Sterchi and lead game designer Brad Rebh have grappled with this challenge for three years. 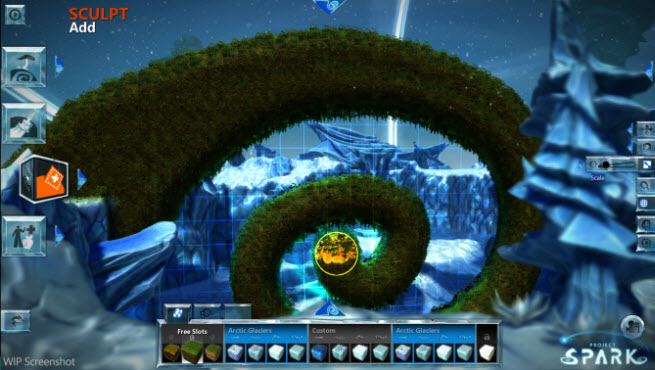 I think it has a shot. The creators have put a lot of thought into the whole system.

“Historically, we’re inherently born with the need to create and play. They’re natural tendencies in us,” Sterchi said in an interview with GamesBeat. “When you think about grounding it from there — you look at that concept and say, ‘Everyone wants to play and wants to create.’ We had an opportunity to do some blue-sky investigations, and we pivoted straight toward that. What does it mean to play? What we saw was, if you think about a kid playing, they run around their neighborhood. They tell stories. They go on adventures.” 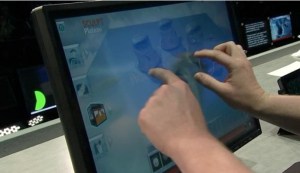 He said, “You look at the modern day and … now they’re sitting in front of a television. They’re having media given to them. When they play games, they go from left to right. They don’t have that opportunity to make their own adventures. So we started exploring that. We looked at everything from Lincoln Logs to play behavior in general. We started thinking past video games. That’s when we started thinking about the genesis of this idea.”

The first major “exploration” has a fantasy theme. So most of the generic objects being created in Project Spark are items that would fit into a fantasy world, like orcs or wizards and medieval buildings.

Everybody at Team Dakota is housed on a floor of an office building in Redmond, Wash., away from Microsoft’s main campus and on the edge of a forest. They started with Kodu, a visual programming language used in schools around the world. It is used by everybody from adults to children ages 8 and up. They combined that with something that enabled people the freedom to “create their own worlds and tell their own stories,” Sterchi said.

Spark has things like lesson plans that, if you fulfill them, you get rewards. Brad Rebh said the language is constrained so that you can’t write an incorrect line of code.

“The key to our vision was the YouTube mentality of giving everybody that camera,” Sterchi said. “You can create something on desktop and go straight to your Xbox One without any additional work from the creator. We had to make the act of creating fun. So our motto is creating is playing.”

A tutorial teaches you how to create something. You can browse other creations, or make your own. A blank world stares back at you. On a touch-screen TV, which is the best design interface, you can “paint” a landscape’s features such as trees or rivers by using your fingers to trace a path across the screen. The ground that you build on is flat and works well for gameplay, so characters can walk across it. If you aren’t happy with it, you can scrub it out.

“You can really hone down and change a single pixel if you want to,” Sterchi said.

Objects also have physical characteristics. You can change the weight and mass of an object so you can make your own physics-based game with boulders rolling down hills at your enemies. You can even put a “goblin brain” into a bird, and that bird will attack your character as an enemy.

Members of the team do a “game jam” every other week, using the tools to build their own games. They test the tools and show off their works to others. Concept artists brainstorm a lot of possibilities, and the animators and artists make them into objects that can be used as templates in Project Spark. That saves players time, but it’s not meant to constrain them.

The team is a mix of veterans. Sterchi, who started his career at Nintendo, has been in the industry for 20 years. Members of the Halo team have moved to Team Dakota, and there are a bunch of new hires. There are operations managers, community managers, and people who make sure that everything is compliant with child protection laws. Spark will be on Windows 8.1 PC, Xbox One, and the Xbox 360.

Saxs Persson, the executive producer on Project Spark, said that the question of the moment is, will people create games or shadows of games?