What users have already created

So far, the beta testers have run with it. More than 70 percent of the usage is in creating.

“We’re seeing what we were hoping for — not that 5 percent you might expect to see creating user-generated content. Seventy percent of the time spent in the game is creative,” Sterchi said. “It’s resonating with people.” 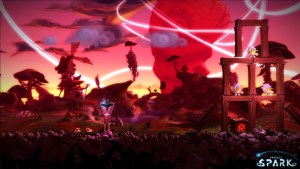 The volume of the material created so far suggests that Microsoft is on to something and that users are spending hours on the creations. While the world has a medieval theme, players are taking the objects and creating things like machine guns.

One 29-year-old player has re-created the whole first level of the original Xbox game Fable. He never programmed before, but he was able to faithfully product just about everything you can see in Fable.

“A lot of the special nature of this comes from how fast you can construct entire worlds, how powerful it can be if that’s how deep you want to go,” Sterchi said. “It’s the ability to create life and behavior. We’ve seen people creating things that react to their own conditions and to their own game constructs. It’s different, in my mind, from what you would historically see, where there’s maybe some sliders you can change to affect a situation, or there’s a character customization option from the game.”

He said, “You can go in here and create behavior that we never made. We didn’t inherently build this thing into the game, but somebody went and made that. I can’t think of anything else that replicates that right now.”

Some online worlds, like developer Linden Lab’s Second Life, are a great outlet for people who are already artists. They can create elaborate showpieces. But can most people duplicate that kind of artistry? Microsoft, by contrast, is tapping tools like its Kinect 3D sensing camera to allow people to capture images and project them inside the game world.

“We have a lot of work around Kinect,” Sterchi said. “Kinect is opening the doors to a lot of special things. We’re doing full-body motion capture, voice capture, and facial expression capture. We have several features around just making sure we can scale. We can take in the masses and have that amount of concurrency. Right now, you can project them on the characters we have. You can put them on a troll or a goblin, taking all of your body motions. We have some more plans as far as how we can use Kinect in the future that we haven’t revealed, around some more of those elements.”

Claude Jerome, a Project Spark designer, showed us how he could use Kinect to capture his “Thriller dance” based on Michael Jackson’s “Thriller” music video. He inserted the move into Spark as an animation, and he could then get the characters in Spark to do the dance. 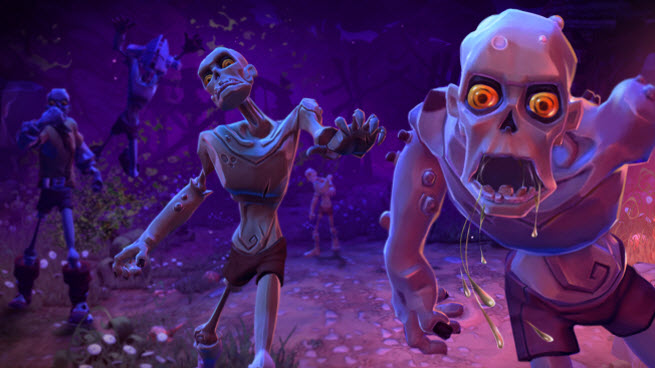 There are, of course, paths that would ruin the chance for Project Spark to become the next Minecraft.

Microsoft faces some tough questions that will shape how far it can go with Project Spark. Sterchi said that if users create works that infringe upon the copyrights of others, Microsoft will take those creations down. It will, however, consider whether the works are illegal copycats or are defensible homages that are creative in their own right. Most brands are OK with homages as it puts more eyeballs on the brand.

Microsoft will further reduce the risks of take-down lawsuits by prohibiting users from profiting from their creations within the game. They can’t, as they can in Second Life, create something and then sell it to other users.

But will Microsoft allow players to take their creations, such as a game avatar or character, and export that model to another game? Will it let players create something that they can take out of Spark’s world? Can they take them to a 3D printer and re-create the image in the real world? These questions are bound to come up and will determine what kind of overseer Microsoft will be.

In the meantime, Project Spark is leading to all sorts of cool creations, with homages to Sonic the Hedgehog, Fable, Sauron from the The Lord of the Rings, and many others. In one of the worlds I saw, a player took the models for some ordinary knives and then made them part of a gigantic sculpture. Some creations are quite crude, but they may create the spark for someone else to run with. Every person has the right to take someone else’s shared creation and build upon it and remix it into something new. Eventually, if players do that often enough, they can use their collective creativity to create game worlds of enormous beauty. But Microsoft never loses track of what each individual contributed.

Microsoft hasn’t revealed how it will make money. By making it free-to-play, it will make Project Spark more widely adopted. But it won’t last if the company doesn’t make money from it. Minecraft fans have shown that people will gladly pay for something great. Microsoft will sell things like add-on packs that let you put on fireworks shows or build a castle.

Later this year, we’ll see if Microsoft has learned the right lessons. Project Spark is shipping in 2014.