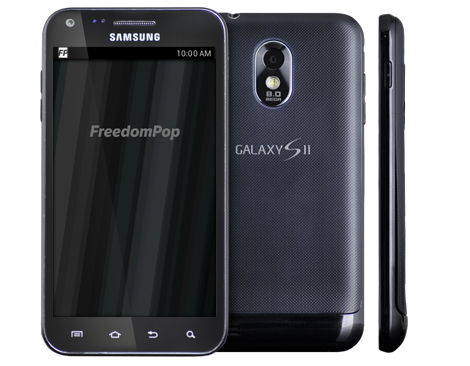 FreedomPop is launching a new black smartphone today. Not only black as in color, but black as in invisible to spying.

The Privacy Phone, built on a Samsung Galaxy II smartphone, uses bank-quality 128-bit encryption for voice calls and text messages (your calls now have the same protection as J.P. Morgan Chase’s transactions), shuttles application and Internet data through an encrypted virtual private network, enables you to change phone numbers as many times as you desire to, and blocks all unsolicited incoming calls and text messages.

The company also claims it protects against phishing websites that want to steal your confidential data.

(But, oddly enough for a privacy-oriented provider, to find out if you have coverage for this phone in your area, you first have to enter your email address and street address, including zip code, into the FreedomPop website.)

If you want this much invisibility in a phone, you may want to leave no trail at all. So, the Privacy Phone — which FreedomPop has informally branded the Snowden Phone in honor of NSA whistleblower Edward Snowden – is something you can buy with Bitcoins, the anonymous and tumultuous digital currency.

The phone itself is $190, and of course has no contract. After three months of 500MBs of data and unlimited voice/text, it’s $10/month. Snowden uses the FreedomPop VOIP network, and, just to be clear, the company said it is not saving any data about its customers’ calling.

Being black is apparently the new look. There’s also the Android-based Blackphone from SGP Technologies, a joint venture of software developer Silent Circle and Spanish handset maker Geeksphone. However, the Blackphone is only available for use with a Dutch wireless carrier in several European countries, and the phone itself goes for $630. Silent Circle’s cofounders include Mike Janke, a former U.S. Navy Seal sniper, and Phil Zimmerman, the creator of the PGP encryption software.

SGP managing director Toby Weir-Jones told the Wall Street Journal that there’s “a big demand for a turnkey solution” in a privacy-oriented phone. He added that a spike in Silent Circle’s encrypted text-messaging service after the NSA story broke served as a kind of wakeup call about the market potential.

There’s also the self-destructing Boeing Black, from defense contractor and airliner manufacturer Boeing, which is targeted at government and defense workers. And then we have black apps, such as from a startup called Wickr that has developed “military-grade” technology that lets users send encrypted and self-destructing messages.

Of course, there could be a few drawbacks to a large population of black devices and apps. Aside from making the lives of terrorists and criminal gangs a whole lot easier, free apps and websites may have to find other sources of revenue, since browser and location tracking are blocked by default. And users will need to remember to enable the Wi-Fi when they want to use a map since both the Privacy Phone and the Blackphone routinely turn off Wi-Fi connections.

And then there’s email. As Silent Circle’s Janke told Bloomberg TV, his company launched a black email service that was getting very popular, but they “scorched it” — in part because an email service requires them to store data.