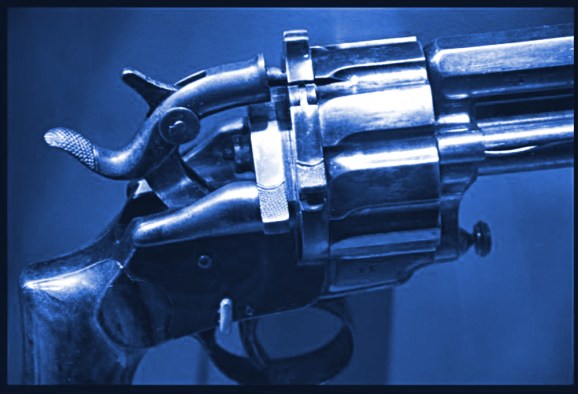 It’s a concerted effort to stop illicit gun sales from taking place through the hugely popular site — but it wouldn’t have happened without sustained pressure from the activist groups and others.

The press conference included Moms Demand Action and the Michael Bloomberg-backed Mayors Against Illegal Guns, two of the groups that have been putting extreme pressure on the company since November.

“What we have seen is the types of guns used in killing sprees are available on Facebook,” Schneiderman said, invoking the mass slaughter of children in Columbine, Colorado in 1999 as well as the Sandy Hook Elementary School in Newtown, Connecticut in 2012 — even though Facebook had no connection to either massacre.

Facebook’s announcement is a major turnaround by the Menlo Park, Calif.-based social media giant, although Facebook’s statement emphasizes its continuity with the company’s existing policies. Facebook has long prohibited paid advertisements for weapons, drugs, and tobacco products. And while its policies allow individuals to discuss the sale of guns (or anything else), Facebook is taking a clearer approach to sales of things, like guns, that are “regulated or controversial.”

Facebook’s Bickert made it clear getting the problem under control is an ongoing endeavor and that the social media giant is working to balance free speech and its stated desire of connecting the world and weeding out abusers.

“Facebook, at its heart, is about helping people connect and communicate. Because of the diversity of people and cultures on our services, we know that people sometimes post or share things that may be controversial or objectionable. We work hard to find a balance between enabling people to express themselves about topics that are important to them, and creating an environment that is safe and respectful. This balance is important to how we view commercial activity on Facebook or Instagram,” Bickert said in her post.

Facebook is now taking a more proactive approach to notifying and educating its users, Bickert wrote:

Any time we receive a report on Facebook about a post promoting the private sale of a commonly regulated item, we will send a message to that person reminding him or her to comply with relevant laws and regulations. We will also limit access to that post to people over the age of 18.

We will require Pages that are primarily used by people to promote the private sale of commonly regulated goods or services to include language that clearly reminds people of the importance of understanding and complying with relevant laws and regulations, and limit access to people over the age of 18 or older if required by applicable law.

We will provide special in-app education on Instagram for those who search for sales or promotions of firearms.

No ID, no problem

An extensive VentureBeat investigation showed how Facebook users were able to skirt the company’s policies to find people willing to sell them handguns and assault rifles without required background checks.

In one case documented by VentureBeat, a 15 year-old who purchased a 9mm handgun from a man he met through Facebook was arrested after he took the weapon to his high school in Kentucky. The seller was also busted, and because he crossed state lines from Ohio to make the sale, is being tried in federal court.

A VentureBeat reporter and his colleague spent less than 15 minutes arranging to buy a semiautomatic 7mm rifle and 90 rounds of ammunition from a guy named “Dave,” a member of Facebook “Firearms Only Alamogordo” fan page. No ID was required for the deal.

Schneiderman, Moms Demand Action, and the powerful Mayors Against Illegal Gun Violence have been in discussions with Facebook since November, after the attorney general sent a letter to Facebook expressing concern about illicit gun sales, VentureBeat has learned.

Schneiderman’s letter has not been made public. Investigators from Schneiderman’s office conducted their own investigation into illegal gun sales on social media sites, including Facebook.

Facebook noted that the changes were made in direct concert with several organizations: Sandy Hook Promise, Americans for Responsible Solutions, the Office of the New York Attorney General, Moms Demand Action, and Mayors Against Illegal Guns.

Schneiderman’s office made it clear that reporting by VentureBeat helped propel the issue, culminating in the changes announced by Facebook Wednesday.

However, other organizations are less sanguine about the change. The Brady Campaign to Prevent Gun Violence made it clear Facebook’s new approach did not go far enough.

“This new policy is not a victory because Facebook continues to makes it too easy for dangerous people to evade a background check when buying guns. A mere warning to follow the law and community-based reporting will not do enough to prevent unchecked gun sales to dangerous people,” Brady Campaign president Daniel Gross said in a press release.

Moms Demand Action founder Shannon Watts initially started her group as a Facebook page after the Sandy Hook killings. Group members launched their own investigations into the selling of illegal guns on Facebook and Instagram. They found multiple examples of dozens of gun dealers willing to illegally sell weapons to minors and convicted felons. In the U.S., felons are outlawed from owning firearms.

Watts’ group now has over 150,000 members, and she joined forces with Mayors Against Illegal Guns to press Facebook to make changes. A petition launched on Change.org now has over 95,000 signatures.

“Happily, there are companies out there listening. There’s still much more that needs to be done to keep guns out of dangerous hands,” Watts said Wednesday.

The organization then launched its own undercover investigations and disclosed some of its findings Wednesday.

“Gun shows pale in comparison to (illegal) gun sales on the Internet, which is why this is a big deal,” Feinblatt said. “It took Facebook a matter of weeks of not understanding the problem to taking concrete steps to fix it.”

Schneiderman made it clear that a majority of gun owners and dealers abide by state and federal gun laws and that those using social media platforms like Facebook and Instagram were in the minority.

The National Rifle Association did not return multiple calls for comment.