Most teens in America are focused on acing their algebra prep and submitting college applications.

But a group of high schoolers in Cambridge, Mass., dedicated three months to designing and 3D printing prosthetic hands for children.

These students, primarily drawn from Beaver County Day School in nearby Brookline, were selected for an innovative new program called NuVu Studio. 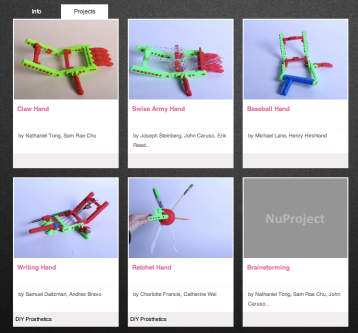 NuVu is the brainchild of Saeed Arida, a former PhD student at MIT, who believes that young people need to be taught to solve open-ended problems. NuVu deliberately avoids traditional learning models, with no lessons, classrooms, grades, or subjects.

“All the students have transformative experiences,” said Arida in a phone interview.

The teens are paired with an assistant, typically a doctoral student from MIT, for the duration of their project. After building the prototype for their product, the students are encouraged to raise funds from crowdfunding sites like Kickstarter and Indiegogo.

Previous themes for “studios” include “the future of global warming,” and “balloon mapping.” In the recent health-themed studio, students were split into groups of 10, and one of the teams developed a new design for a prosthetic hand. That team conducted interviews with physicians, startup founders, and engineers in the Boston area. They ultimately hacked MakerBot’s original files to 3D print their own designs.

Other students created an “insomnia pillow” that measures brainwaves to help insomniacs fall asleep and a medical device that helps people with Parkinson’s disease better control their tremors.

NuVu isn’t the only program that seeks to arm students with digital skills. Across the country, schools and universities are redesigning education to prepare kids for jobs that may not have been invented yet. In San Francisco, serial entrepreneur Ben Nelson is building a new model university called Minerva, where students learn modern skills such as advanced stats and behavioral economics. And tech companies like Google offer a dozen or so educational programs, including an Android camp where college students can learn software development and build new apps.

But NuVu is one of just a handful of programs focused on K-12 rather than higher education. Students between the ages of 11 and 17 can apply, and they are selected after an on-site interview.

Arida is forging partnerships with schools to make the program available as an elective, often with the provision that students sign up for online courses in more traditional subject. Students can opt to enroll in NuVu for a full year or just a semester, and still graduate on time.

The program accepts some 40 students each quarter from a variety of schools, including charter schools and public schools. Tuition varies, as it’s equitable to the sum that students pay for their quarterly tuition. Students enrolled in public schools in low-income neighborhoods pay far less than their counterparts at prestigious boarding schools.

NuVu’s team face a number of obstacles as they attempt to scale the program to more schools. Its primary partner, Beaver Country Day School, is positioning itself as a progressive and digitally-savvy institution and is more open to partnerships than many others. Beaver Country first hit the headlines when it recently made it a requirement for students to take computer programming lessons.

In other school districts that are not quite as open to new ideas, NuVu may face opposition from parents and teachers.

Still, Arida and team are forging ahead with new studios, some as far afield as India.They are also in talks with schools in Florida and New York.

“We want to empower students to come up with creative ideas [and] execute and develop a fully-fledged product at the end,” said Arida.

To learn more about the NuVu innovation center, check out the video below.