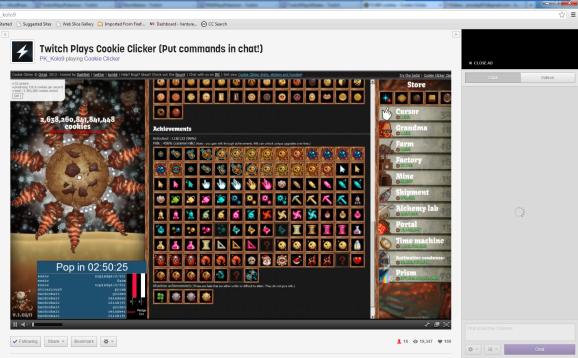 A screenshot of someone streaming the browser game Cookie Clicker!

Twitch is a livestreaming site that enables gamers to share moments from the biggest releases on consoles and PCs. That tech is now heading to mobile.

After crossing more than 10 million installs of its app on iOS and Android, Twitch has revealed its new mobile software-development kit. This tool will enable mobile-gaming companies to add livestreaming and video-capturing features to their apps. It’s available now through the Twitch developer program. Livestreaming is a huge trend in gaming. Twitch has over 45 million monthly unique viewers, and it plays a major role in the promotion of new games. Native Twitch implementation could help mobile games attract new users who discover the game on the site.

“Our vision is to provide the Twitch community with the ability not only to view, but to broadcast live video game content wherever they are, whether they’re on the go or in the living room,” said Matthew DiPietro, VP of marketing, Twitch. “We’ve achieved that with our PC and console integrations, so the trifecta will soon be complete with our deep and concerted foray into mobile broadcasting.”

Twitch enters the mobile sector after establishing itself as the top site for game streaming PC and console titles. In this arena, it will face competition from companies like Kamcord and Everyplay. Both have similar SDKs that enable developers to offer gameplay recording and sharing on iOS and Android. Both are already in games available on each platform, and they promise that their services won’t negatively impact a game’s performance. Twitch will have to prove to developers that it can say the same.

Last month, Everyplay revealed that its tools will even work on older versions of the Google’s mobile operating system.

We’ve asked Twitch for more information about the compatibility of its SDK, and we’ll update this post with that information.

Of course, Twitch does have an advantage over Everyplay and Kamcord. Those solutions only enable gameplay recording. Twitch’s mobile implementation can do that, but it can also broadcast live. If it works well, that could draw a lot of interest from developers.

Kamcord told GamesBeat that it is currently looking into livestreaming. Everyplay says that they’ve proven they can get it to function, and are working toward adding it to its product in the future.