In the constant drive to make games look more realistic, few of them have the look and feel of a handcrafted work of art. The upcoming PC game The Last Tinker: City of Colors from independent developer Mimimi Productions is like a painted papier mâché sculpture you find at a local art show. It feels solid, unique, and full of bright charm.

In The Last Tinker, you play as Koru, an ape-like youth who develops the power to restore lost properties to color. In his home of Tinkertown, the colors of red, green, and blue each represent both a positive and negative attribute. For example, red symbolizes strength, but it can also represent aggression. Blue embodies fortitude and sadness, while green stands for both curiosity and fear. 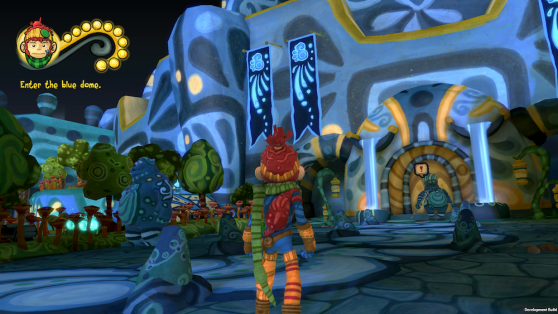 Above: As Koru explores the world, he’ll find blue-themed levels dominated by sadness.

When the citizens of Tinkertown embrace their negative emotions, they become more segregated and polarized. They seal themselves off from other colors until a spirit of creativity guides Koru to help integrate them.

The Last Tinker features a strong color palette, with gorgeous scenery and charming animal characters. It seems to draw inspiration from stylized adventure games like Psychonauts, the colorful world of Viva Piñata, and the art and architecture of Antoni Gaudí. 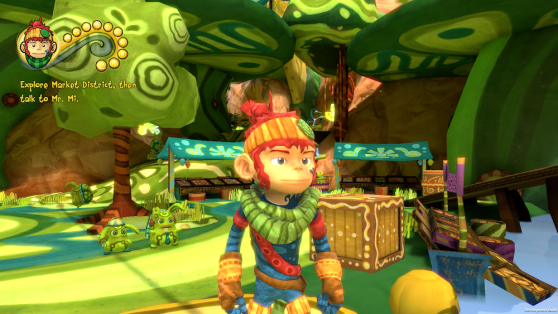 Above: The detailed artwork of The Last Tinker feels highly expressive.

The gameplay is also a combination of different influences, but with a bolder tone. At times, it’s a platformer like Uncharted, mixing hand-to-hand combat and light puzzle-solving with climbing and exploration. You’ll also have to jump across rocks or branches like one of the heroes of Assassin’s Creed.

During certain segments, you’ll guide Koru as he skates along rails like skateboard star Tony Hawk. When Koru jumps on one of these rails, he’ll zip along automatically, but you can jump over obstacles or leap to the side to avoid spikes and falls. This is also your best opportunity to absorb the vivid environments.

Later in the game, you’ll be able to whistle, which controls an exploding companion. You’ll also be able to use colors in combat, switching between them to make enemies take damage or run away in fear. 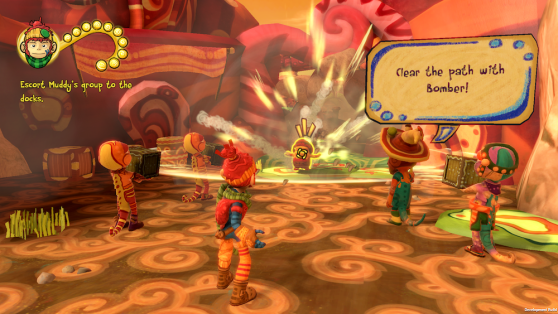 Above: Later in the game, you’ll be able to whistle to control living bombs.

Although The Last Tinker feels like a blending of different genres and earlier games, the gorgeous art style and creative story offer a vibrant new appeal. The intentionally sloppy splashes of color give it a hastily assembled look, and the cardboard-cutout speech bubbles look like they belong in a student diorama. It’s a sharp-looking game that retains a few purposeful rough edges. We’ve only played a few levels so far, but we’re eager to see the rest.

The Last Tinker: City of Colors will be available in the second quarter of 2014 on PC, Mac, and Linux. Check the gallery below for more images from this dazzling game. 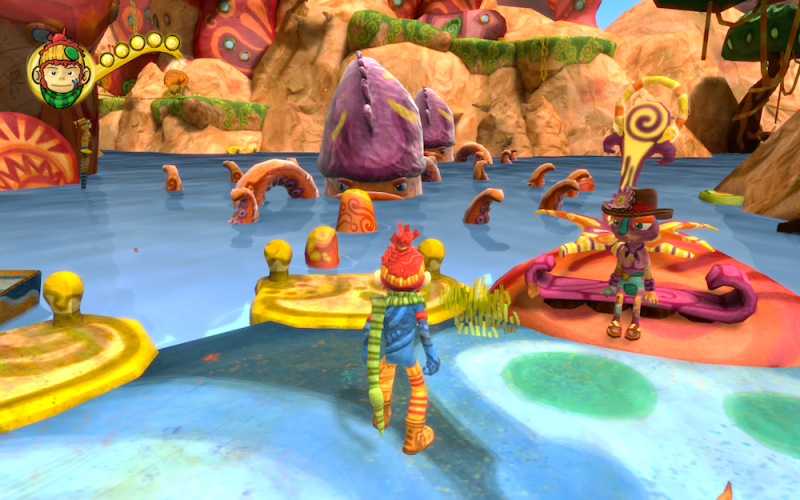 Above: Jumping over tiny platforms is handled easily by holding the space bar while running, similar to Assassin's Creed.