Let the headspace competition begin. The newest arena: a SXSW demonstration this weekend of proof-of-concept apps for Epson America’s new smart glasses that try to reach beyond Minority Report.

The Moverio BT-200 smart glasses, first unveiled at the Consumer Electronics Show in January, are the next generation of the company’s earlier clunky model.

“Google Glass is more of a push-notification, always-on, heads-up display for micro-experiences,” Imaginary Computer CEO Sean McCracken told VentureBeat. By contrast, he said, “Moverio is a long-form experience.” McCracken will be demoing the apps. 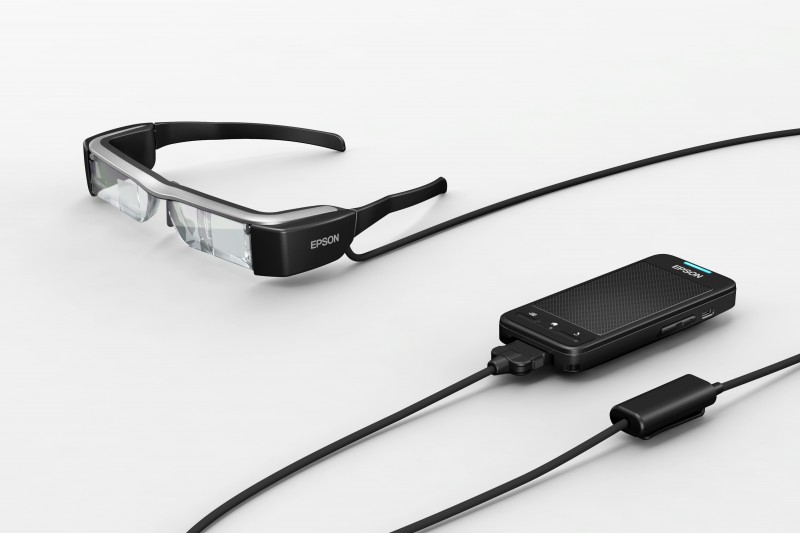 Above: Epson’s Moverio with control unit

In Minority Report, Tom Cruise waves video, photos, and data between large, translucent screens. But that was the past’s version of the future.

“They were stuck with big screens,” McCracken said, while Moverio is mobile.

In one of the demoed apps, the Myo gestural control armband is employed so that a Moverio-wearing user can “grab” data in an overlay and move it anywhere within the field of view.

“With this, you can move around a room,” he said, “grabbing a Twitter feed or spinning an Instagram cube.” The field of view turns as one’s head turns.

For hunkering down with multiple screens, McCracken will also demo a second-screen experience he created.

“You can set a focal point” with the control unit, he said, so that there’s a transparent center field for watching TV or a live event. On the left and right, multiple menus can be selected through the control unit, or you can just watch your Twitter or Facebook feeds on the side while you’re watching the show.

McCracken has also updated his PSYCLOPS arcade game so that as many as four Moverio-wearing users can multi-play it in the same room — or remotely. The glasses are networked via Bluetooth, with the first control unit acting as the server.

Then, there are applications with coolness that outweighs their apparent utility.

Case in point is another concept demo, this one for hands-free control of lights. A lamp, using APX Lab‘s Skylight platform, is a stand-in for any appliance.

The lamp can then be turned on or off, or switched to a different light intensity, just by gazing. Focusing your gaze on the hot spot brings up a menu, head motion moves a cursor, and hovering the cursor over a menu item chooses that selection.