Nvidia will hold its sixth annual Emerging Companies Summit at its GPU Technology Conference in San Jose, Calif., in late March. And while the world’s biggest maker of standalone graphics chips often invests in companies working on cool graphics, this marks the first time that it will give away $100,000 in an on-stage bake-off among startups competing to be the best emerging company.

Jeff Herbst, vice president of business development, will lead the summit and be a judge in its Early Stage Challenge contest, where 12 companies will gather on stage to compete for the prize. Nvidia has had some successes with its investments lately — the biggest was Zynga’s $527 million purchase of NaturalMotion, a mobile game developer that Nvidia invested in early on.

We caught up with Herbst for an interview at the company’s headquarters in Santa Clara. He also told us what tech sectors are ripe for investment and the trends he is paying attention to among startups. Here’s an edited transcript of our interview. 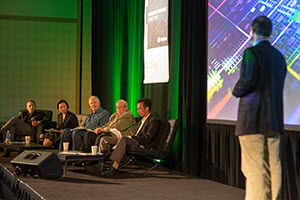 VentureBeat: What’s new that you’re doing at the conference? How is this contest going to be different?

Jeff Herbst: This is our sixth year doing the Emerging Companies Summit here in San Jose. The new and exciting thing this year is what we’re calling our Early Stage Challenge.

What we realized is, (graphics processing unit) GPU computing and people building their businesses on top of a GPU is now, in my view, well beyond the tipping point. We’ve been at this for a long time. There’s now a lot of people who are actually trying to make money off of GPUs. Just look at what’s going on with Bitcoin mining. People have figured out that there’s a speed and money advantage to using these kinds of processors.

We’re going to go a little bit earlier-stage this year. We’re going to keep doing what we’ve done in the past, which is showcasing some of the mid-stage private companies who’ve raised decent amounts of funding from VCs or elsewhere, but we also decided we’d make a contest for companies that have raised less than $1 million of total capital. We put out an open invitation for those companies to apply, and we selected 12 of them to be part of the Early Stage Challenge contest.

We’ve asked Scott Budman, from NBC11, to moderate this. We have a panel of other experts, including Bill Reichert from Garage Ventures. Jens Horstmann from Crestlight. Pat Moorhead, from Moor Insights & Strategy. I’ll be up on the panel as well.

What we’re going to do is bring all 12 companies up in a two-hour window – about eight minutes per company – for part presentation and part Q&A from the panel. After we’re done, we’re going to vote on who we think is the company with the best prospects for commercial success, and award a $100,000 check on the spot.

The interesting thing about this is that the panel will get to vote, but the audience will get to put their input in as well. There’ll be a weighting factor between the panel of judges and the audience. The other key thing about this is, I’m not looking for research projects. The criteria are, it’s the best prospect for commercial success. If you want to see research projects, there are other parts of the GTC you can go to. We want to provide funding to the company that we think has the best chance of succeeding in the future. This is no strings attached cash. It’s not an investment. It’s just a cash infusion.

VB: And that differs in that some of the past ones were investments, right?

Herbst: We’ve never actually made investments as prizes for the Emerging Companies Summit. We do have what we call the One to Watch awards, which we’ll be giving out again this year, to five companies. Those awards are mainly a combination of in-kind services and prizes. It doesn’t encompass cash.

We also do invest in some of these companies on our own, but that’s not something we do as part of the conference. That’s what we call our GPU Ventures program.

That’s why I think what we do is pretty exciting. We’re not just throwing a big net out and saying, “Come join us.” We have a very specific theme that’s not only interesting, but often very cool, because what these companies do is very visual in many respects.

VB: In recent years, GPU computing was more of a focus than just pure visualization, right? Do you still have that emphasis, or do you consider some of this to be accomplished now?

Herbst: I’d say we’re seeing more and more companies doing GPU computing, but we continue to show a mix of companies at the conference. We have everything from big data, cloud, gaming, analytics, computer vision—I’d say those are some of the main categories. They span from mobile to desktop to cloud and combinations of them all.

I would say that if we’re seeing anything, we’re seeing – as a percentage of the mix – more companies doing GPU computing than we did five years ago. This is what I said at the beginning. We’re well beyond the tipping point, where people are using GPUs for all these kinds of applications.

Above: The start of a match in CSR Racing.

VB: What are some of the successes that you’ve already seen in this visualization area?

Herbst: We just had two recent ones I can tell you about. Both were companies that were alumni of the Emerging Companies Summit, and also companies that Nvidia was fortunate enough to invest in. The first one was NaturalMotion, which was just sold to Zynga for somewhere in the neighborhood of $500 million. That was the best exit we’ve ever had from our GPU Ventures program. They presented a couple of times with the Emerging Companies Summit.

The other one I can mention is Geomerics. They were doing a lighting engine. They were just bought by ARM in December, I believe. We were also an investor in that company. That was another good exit for us.

VB: What’s the most imaginative place where GPU computing is sprouting now? What would you consider that to be?

Herbst: I’m particularly excited about companies using GPU computing for enterprise applications. Big data is on my mind right now. We’ve got a couple of companies presenting this year that will knock your socks off. One of them is called Sqream. They’re going to be interesting for the audience. The other area is machine learning and robotics. This is another theme that we’re starting to see interesting companies explore.