The best games can make people of any skill level crowd around a television and lose themselves for hours. One of them is Super Smash Bros. Another is TowerFall.

The connection isn’t a coincidence. Matt Thorson grew up playing Nintendo’s local-multiplayer fighter with his friends. His archery-arena game, TowerFall, stands out as one of the best titles on the Android microconsole Ouya. Both are highly addictive and make for fast-paced, competitive play that never feels the same twice. That’s why people have been playing Smash Bros. for years.

TowerFall: Ascension, an enhanced version of the original (with more modes, levels, and power-ups), is coming March 11 for PlayStation 4 and PC. It’s the Super Smash Bros. of the indie scene, but it could be a lot bigger.

Easy to learn and super addictive

TowerFall: Ascension’s best feature might be how easy it is to pick up and learn. The left stick moves, the X button jumps, the Square button fires your arrows (holding it down steadies your aim), and R2 dash-dodges, which lets you evade attacks like in Super Smash Bros. or catch and steal arrows in midair.

Above: Four-player Versus mode in action.

How you employ those four simple mechanics entails a surprising amount of nuance, which makes Ascension all the more addictive. You can bounce off walls to reach tall heights or dash up to leap higher. You discover new little tricks as you progress. After just a couple of hours, I felt like a master, but levels get intense, especially when you’re competing against monsters or the clock. They don’t fall short on challenge.

Stages are dynamic — full of traps waiting to spring. Players can pass through openings on the sides of the screen and reappear on the other side, like in Pac-Man. That makes it easier to sneak up on opponents or stomp on their heads to kill them. It also means you can shoot arrows through gaps, but mind any that you fire straight up in the air. Gravity takes effect and will make them fall back down, and even your own arrows can kill you.

One of the first must-have PS4 titles

TowerFall isn’t exclusive to the PlayStation 4, but it makes the most sense on that platform. PC gaming doesn’t encourage couch play (Ascension doesn’t have an online mode and won’t be getting one for any version), and few people are adopting the Ouya. The PS4 is the definitive platform here. This isn’t a reason to purchase the console, but it is one of the best and only excuses to get people together to play it. And the PS4’s controller feels a lot better than the Ouya’s does.

Ascension’s main draw is Versus, which splits into three main modes for two to four players. The best of these is Headhunters, a free-for-all where players use whatever tactics necessary to kill each other off. Matches can be short or last several rounds depending on what settings you choose. With everyone earning points, winning becomes a frantic race to the finish, and Ascension rewards each player with goofy achievements based on behavior like “Most lethal” or the “Koala award” (if you spend a lot of time hanging onto ledges). 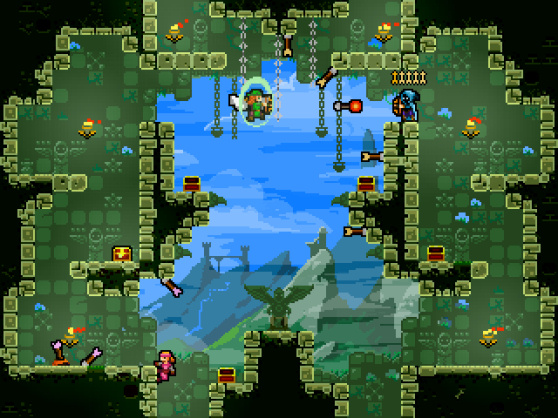 Above: Your opponents are only one of many threats to watch for.

Team Deathmatch (for three to four players) assigns you to red and blue teams (a nice co-op alternative), and Last Man Standing only rewards the final surviving player. While the latter is the most serious and skill based of the three, Headhunters is the most well-rounded. Matches advance quickly, and the excitement is greater because everyone is gaining points at once.

Multiplayer gets infinitely better when you tinker with variants, or the different conditions for a fight. You can change the types of arrows and power-ups that are available, alter the rules, or add new elements to the mix — like wings or cursed bows. The ghosts were the favorite of my group: Like in the indie multiplayer platformer Spelunky, when you die, you come back to haunt the other players as a spirit. Only Ascension’s version of this is a lot more fun. In Headhunters, especially, you can dash-dodge into other players to kill them and get credit for it. It’s sweet revenge.

Fun for two or just one

Versus is the main attraction, but you don’t need three or four players — or anyone else at all — to have a good time. The new Quest mode lets you tackle a world map alone or with a partner. Each level consists of numerous, increasingly challenging enemy waves. Players aren’t immune to each other’s shots, so you’ll need to learn to work together, share arrows, or devise a strategy to beat enemies. That’s something you can only do in the same room.

I was surprised at how much I liked Quest mode. It doesn’t feel like filler content or a secondary mode to Versus. It’s a full adventure that makes the most of the gorgeously detailed pixel-sprite stages, which burst with color and cycle through multiple layout variations. They all establish a different theme with awesome music to match. Sunken City resembles ancient, blue- and green-tinged ruins deep under the sea, and King’s Court is festive and regal, adorned in gold. The monsters are equally as memorable. Even the simplest foes can prove a threat when they’re bombarding you from all sides. Slimes lose their one eyeball when you squash them, flying harpies blow miniature tornadoes your way, and ghosts float around often undetected. Each wave gets more intense, and you’ll have to survive until the end. 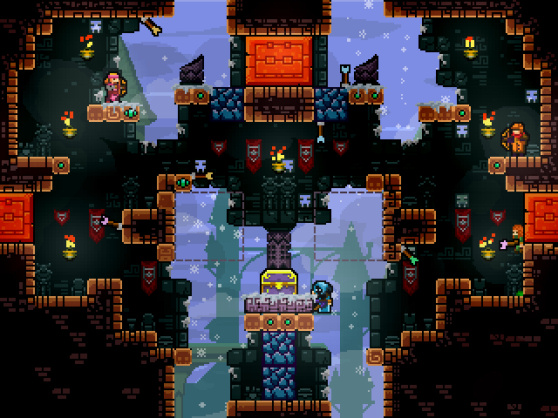 Above: The King’s Court is one of the coolest and most challenging stages in TowerFall: Ascension.

Playing Quest co-op has its advantages: It’s a lot easier to conquer, and if you die and your partner survives to the next wave, you get an extra life to resurrect. You can also steal one of his lives to jump back into the action. It’s a clever system.

The final mode is Trials, which you may have gotten a taste of when booting up the free demo of TowerFall on Ouya. It’s basically a single-player time trial with a surprising layer of strategy. The goal is to kill straw dummies in the shortest time possible, which involves finding the best path and taking shortcuts, but it’s the simplest and most boring mode by far. At least it gives you something extra to do.

You’ll imagine how much more it can be

Setting different variants in Versus leads to a lot of cool custom matches, but my friends and I were itching for more. That’s a testament to how good TowerFall: Ascension is. We craved more modes — more ways to play.

That’s what holds this little indie game back. Only four characters are unlocked at the start, and none of them play any differently. I guess that makes sense for the kind of game Ascension is, but it does restrict the possibilities.

Above: Occasionally, the lights will go out, leaving you in the dark.

Of course, the variants are so user-friendly that it’s easy to add handicaps or advantages as you see fit. You can even apply them to certain players and not others. But my friends and I wished for more of these options, including the same great respawn capability that’s in the co-op Quest mode, where you have lives and can gain or steal new ones. That would put us back in the action faster, so we don’t have to sit there while other players finish fighting. Matches are snappy, and the wait in between doesn’t always take long, but it’s noticeable in a mode like Last Man Standing.

You’re going to get a lot of play out of TowerFall: Ascension, which is likely going to be the best version of this deep, clever, and wildly fun game. I loved what I got, and I wanted more. If you thought local multiplayer was dead, you might want to give Ascension a try.

TowerFall: Ascension releases for PlayStation 4 and Windows PC on March 11, 2014. The publisher provided GamesBeat with a PS4 download copy of the game for the purpose of this review.