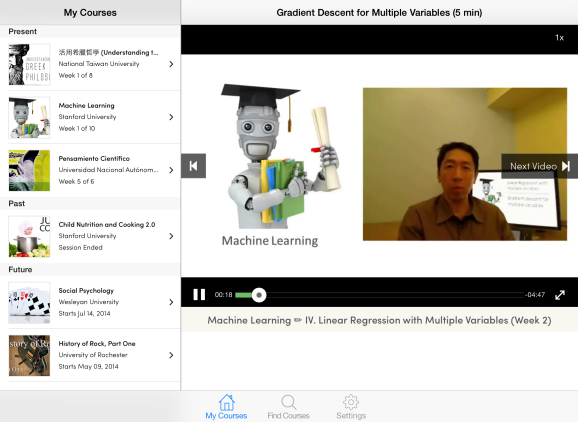 Coursera has released an iPad application loaded with over 600 courses on topics like finance and psychology.

It’s a no brainer that the ed-tech startup would invest in the development of tablet apps. Tablets are optimized for watching videos and reviewing written study material. The iPad app also offers educational quizzes, so you can gauge how much you’ve learned.

The app will likely be a hit with commuters. The new Coursera app is optimized for learners on the go. Download courses before you hit the road for offline viewing at any time.

Silicon Valley-based Coursera is one of the best-known providers of massive open online courses, otherwise known as “MOOCs.” It competes with Udacity, edX, and a slew of others. The company is among the most well-funded of the bunch, having raised its cash from venture firms and university partners (about $88 million to date.)

In December of 2013, the startup rolled out its hotly anticipated iPhone app (read our review here). The courses are taught by professors at some of the top universities in the world, including Stanford University and Johns Hopkins.

Coursera has been fairly slow to develop its mobile apps. But the execution and design are impressive — the iPhone app boasts a 4.5 star rating on the App Store.

While the company has been perfecting its iPad version, third-party providers like CoursePad have sprung up. CoursePad offers an app for people to view Coursera courses on an iPad. The new Coursera-branded iPad app will likely wipe out CoursePad and other third-party apps.

The company is now furiously developing an Android app, according to a Coursera spokesperson, and that should launch this spring.