Spira has never looked so good.

The remaster of the iconic Final Fantasy X and its screwball sequel, Final Fantasy X-2, brings one of Square Enix’s most important role-playing games into HD. And it does so well, with its world of Spira at times looking even better than what you might find in the Final Fantasy XIII games (note — designers, bright colors do look good in HD!).

And at $40, this collection for the PlayStation 3 and the Vita (cross saves work, but you need to buy separate editions of both — it’s not a cross-platform buy) coming out March 18 finally brings all of the International content that American players whined about missing a decade ago. The PS3 version I played looked great, ran well, and didn’t have any bugs in more than 80 hours of playtime.

Fans of Final Fantasy will love returning to Spira, reexperiencing the adventures of the summoner Yuna, the misplaced hero Tidus, and their friends as they battle Sin, a giant monster (and as series veterans know, it holds a big surprise) that thrashes the world on a regular basis. But decade-old design decisions and character fashion choices (butt cheeks showing on women!) serve as a reminder of how far role-playing games have advanced since FFX came out in 2001.

More X|X-2 than ever before 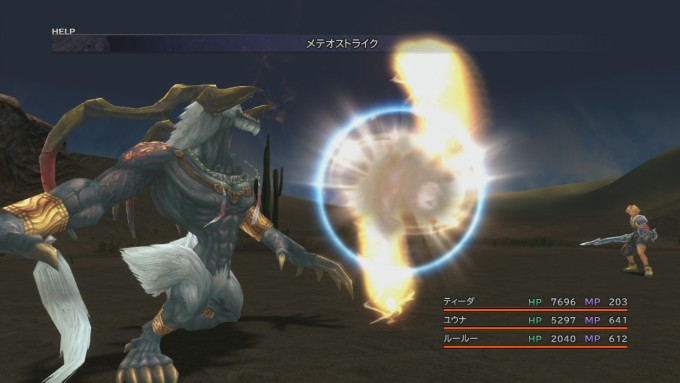 Above: The Dark Ifrit is one of the special battles from the International version that is now available to those in the Americas.

Finally, we in the Americas get the complete collection of these RPGs. The International versions, which only appeared in Europe and Japan, enhance the originals. For FFX, you get the Expert Sphere Grid of character abilities and the Dark Aeons (these are powerful monsters you fight, not additional Aeons that Yuna can summon) in FFX. And with FFX-2, you may play with the Psychic and Festivalist Dresspheres — the outfits you change into and out of that grant combat abilities similar to the series’ long-lived Job system — and the Creature Creator and Fiend Arena (tournaments in which you use your team of monsters to fight other premade squads). These also throw-in some TV-like content — you get the “Eternal Calm” that bridges FFX and FFX-2 and the later’s “Last Mission.” The package also has 30-minute episodes with each set of end credits. These are all well done, but they don’t really add that much in terms of understanding FFX and FFX-2. I could have done without them.

The result is a package that’s much like a Thanksgiving cornucopia, overflowing with content. At $40, you’re getting a couple of hundreds of hours of content, especially if you try to complete 100 percent of the games (such as defeating all the new Dark Aeons). And if you felt the Final Fantasy XIII series didn’t give you enough to do, you have something that gives you almost too much to do — especially if you use the New Game + modes.

And if you dig FFX-2, you really want to spend some time with the Festivalist Dressphere (it’s one of the changeable outfits give characters their class, similar to the series’ Job system that grants Black Mage, Thief, etc.), which uses firework-themed attacks. The Festivalist’s combat animations actually include a fuse that lights and winds its way to targets. Or you can send out killer flying goldfish. I loved hearing some of the child-like screams of pleasure (sparklers!) when the characters launched one of these attacks. 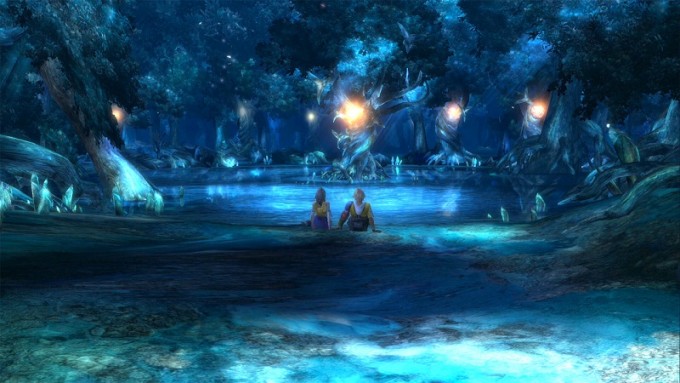 Above: Final Fantasy X’s stars, the reluctant Tidus and the summoner Yuna, share a private moment.

This is a sharp HD remaster. The cutscenes are crisp, and a number of them look like they could’ve been originally made in HD, not during the PlayStation 2 era. The rest of the games look almost as good as well. Some may look at HD remasters as a cash grab (especially one from a company like Square Enix, which isn’t shy about releasing old games on other platforms). But it’s clear the publisher put a great deal of effort in making these Final Fantasys look as good as it could, and those who adore these games — or have never played them — should enjoy just how good they look.

Sure, this is turn-based combat, but after playing the different takes on the Paradigm system from the Final Fantasy XIII games — where you pick what’s essentially a class for your party members that initiates attacks — it’s nice to get back to the old-style combat.

Both games’ battle systems feel more strategic than I remember them — especially with FFX, where being able to swap out characters and even weapons every turn provides you with a significant amount of possible tactics. Need a warrior? Bring in Auron, FFX’s take on Obi-Wan Kenobi. Need a weapon that blinds a foe? Change your blade and blind ’em next round.

The Dressphere system remains a blast. You set up your power-granting garments in grids, which themselves can add an ability or two to your characters using them. You can swap out these dresses each turn, and after connecting them on the grid by changing during combat, you can gain access to special outfits once you earn them. This makes for some fantastic combinations between your three characters, though sometimes, you’ll find yourself using a setup that just flat-out fails against some critters. 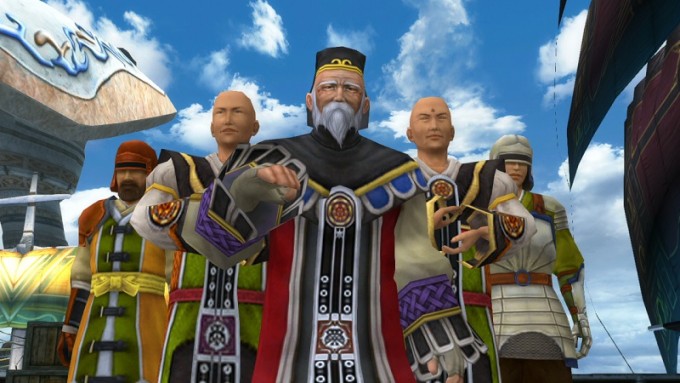 Above: Maester Mika (center) and his entourage don’t look all that sharp.

The HD conversion makes just about everything look great — settings, buildings, monsters, airships, and main characters all look sharp. But when you deal with the secondary characters, you see how Square Enix prioritized character design in the PS2 era. They look kinda like bad plastic, with a flat face surrounded by muddled, indistinct features. It’s distracting whenever you deal with one of these — especially Barthello, the guardian of the annoying summoner Dona. It’s too bad the folks in charge of the remaster couldn’t make these folk look better.

Square Enix added a couple of things to this package — including some touchscreen controls for the Vita version. But it ignored a lot of issues that players a decade ago complained about, like unskippable cutscenes. You can jigger the controls so that the summoning sequences in FFX and the Dresssphere changes in FFX-2 are much shorter, but you can’t skip the cutscenes. So if you die at a bad place, be prepared to watch them again. And again should you die more than once. 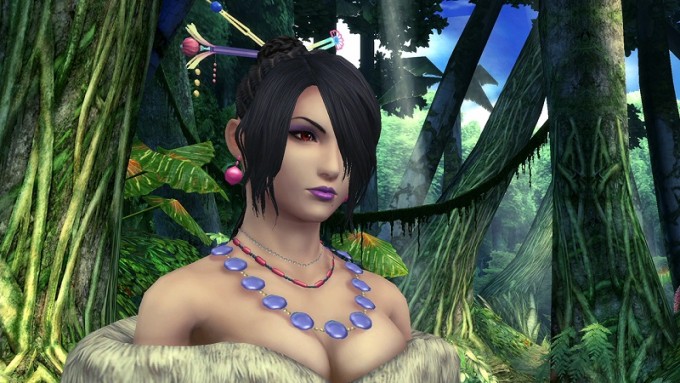 Above: Yep, Lulu’s boobs are still kinda hanging out.

Japanese game design isn’t always the most enlightened when it comes to how it garbs women characters, and I had forgotten just how revealing some of these outfits were. The butt cheeks hang out for some characters. Boobs and cleavage are prominent in others.

This is especially a shame because some of the women are strong characters, especially in FFX-2, and they don’t deserve looking like sex objects. They should look like heroes.

The PlayStation 3 version puts both FFX and FFX-2 on the same disc, but the Vita card only holds FF-X. You must download the other game with a code that comes with the package. It’s inconvenient and annoying, and it’s the worst part of the Vita package. 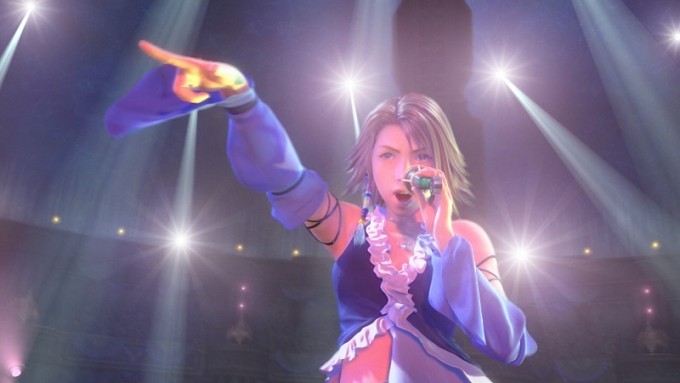 Above: Being the high summoner is cool and all, but what about being a pop star?

Square Enix has been known to rerelease subpar versions of its Final Fantasy games — just look at the old PlayStation port of Final Fantasy VI. It’s clear that the publisher put plenty of care into this version, giving those of us in the New World the complete package for the first time and no doubt pleasing fans with TV-like episodes that run with the credits.

It’ll be especially interesting to see how Final Fantasy fans receive this; for some, FFX was the final “good” (meaning traditional) game in the series. And for those of us who like the Paradigm system of Final Fantasy XIII, it’s a welcome visit to a game many remember fondly.

Even if too many butt cheeks are hanging out.