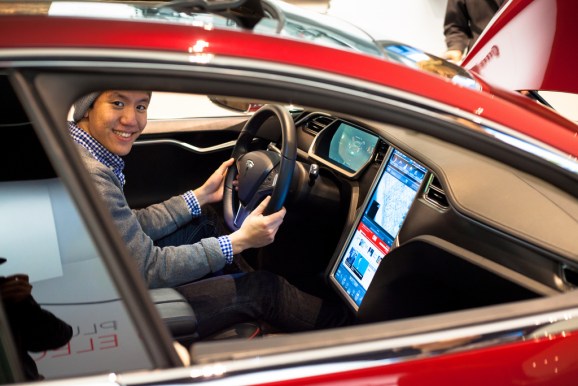 It’s now been a year since I took delivery of my dark green 2013 Tesla Model S with the 60-kilowatt-hour battery.

After almost four years of waiting, those first days after delivery were euphoric. As I recall, the words “greatest freaking car in the entire freaking Universe” (or thereabouts) passed my lips on several occasions during the honeymoon period.

But the Model S actually used  more electricity than the 5,074 kWh on the car’s energy meter.

For one thing, the charging process is only about 85 percent efficient. Which means that  for every 85 kWh used by the car, 100 kWh came through my electric meter. In reality, that 5,074-kWh number is actually more like 5,700 kWh.

In addition, my car’s “vampire” power draw while parked and shut down averaged about 4.5 kWh per day for the first 10 months, and then about 1 kWh per day after a software update two months ago. I estimate the vampire draw sucked up an additional 1,400 kWh or so.

That brings total actual energy usage for the year: about 7,100 kWh–putting efficiency at about 466 Wh/mile, or about 2.1 miles/kWh.

The vampire and charging losses bumped the year’s real fuel cost up to  $820, or about 5.3 cents per mile. Which is still barely a quarter of the fuel cost of a comparable gasoline car.

As with all electric cars, my efficiency was much lower in cold weather.  For the April-to-October period, I averaged 301 Wh/mi, compared to 371 Wh/mi for November to February.

Although I didn’t measure month by month, these numbers imply that energy usage in July–the hottest month–was probably in the  range of 290 Wh/mi, while January’s was close to 400 Wh/mi.

Earlier this winter, during my first January with the car–which was followed by the coldest February in recent history around these parts–I found that my energy usage nearly doubled for the short local trips that I usually take.

Time after time, I’d come home from a run to the grocery store or the chiropractor with an average consumption of well over 500 Wh/mile. (That’s before counting vampire and charging losses.)

These short trips are particularly hard on overall efficiency, because the huge initial surge of power required to heat up the battery and cabin can’t be amortized over a large number of miles.

On longer trips during cold weather, the average energy usage would steadily decline after the initial peak readings, eventually settling into the 370-to-380 Wh/mi range.

I had no major problems during the year. A few minor glitches  were quickly corrected under warranty by my local service center in White Plains, New York. Among those glitches:

Frustrated by my 60-kWh car’s lack of range between  the few-and-far-between East Coast Superchargers at Interstate speeds in cold weather, I upgraded my 60-kWh battery to an 85-kWh pack in December.

At first, I was told by the factory that such a thing wasn’t possible. But the service guys at White Plains found a way. After just two days in the shop, I had my upgraded car back, complete with its discreet chrome “85” emblem.

I’m delighted with the result.

A 2,500-mile Supercharger road trip to Florida and back was a breeze, rather than the white-knuckle freeze-in-the-slow-lane ordeal of previous road trips with the smaller battery.

1. The Acceleration. Sure, the zero-to-60-mph number (5.4 seconds) is impressive. But it’s the quality  of the acceleration that’s so transformative: instantaneous, seamless, silent, effortless. It’s what separates this car from all others. After a year, I still get giddy every time I stomp on the pedal.

2. The Deceleration.  At first I was a skeptic about strong regenerative braking, a feature of electric cars that slows the car by turning the motor into a generator to charge the battery in the process. Now I love the sporty, responsive feel of strong “engine braking” when I back off the accelerator. I virtually never touch the brake pedal any more.

3. The “Fuel Economy”  To get the equivalent of almost 100 mpg while driving a car this big and fast is a surreal, mind-boggling experience. And then to make a 2,500-mile road trip via the Supercharger network at a total fuel cost of $0.00–well, it’s so great it feels illegal.

4. The Service Program  Getting my 12-Volt battery replaced was the single most positive automobile-service experience of my life. It started when I got a phone call out of the blue from the White Plains service center. Carla said they’d just gotten an e-mail from Tesla engineering in California.

It seems I was having problems with my 12-Volt battery. Frankly, I was unaware that I even had  a 12-Volt battery, much less a problem with it. But Tesla’s system of remote monitoring had detected a problem with mine. Would I mind if two Tesla Service Rangers came out to my house that morning to replace it?

Three hours after being informed of a problem I didn’t even know I had, it was fixed in my driveway, at no cost or inconvenience to me. How can car service possibly be any better than that?

5. The Style  I know it’s shallow, but looks are important to me in a car. I’m very unlikely to buy an ugly or even plain-looking automobile, no matter how practical it might be.

To my eye, the Model S is gorgeous, in a classic way that won’t fade with time. A year later, I still look back at it every time I walk away from it in a parking lot.