Eight dancers press their way across the stage, leaping and twirling through the Tunisian government’s firewall. After the successful hack, all but one pair of black-ringed eyes disappear from the stage as a familiar tagline replaces the twisting mesh background:

This is the sixth scene of HackPolitik, a ballet depicting the murky, controversial history of hacker collective Anonymous. It’s the brainchild of composer Peter Van Zandt Lane, who worked with choreographer Kate Ladenheim and her contemporary dance company, The People Movers, to bring distributed denial-of-service (DDoS) attacks to the ballet.

“I lean more towards abstract ideas, because I don’t actually know if dance is all that effective as a storytelling method,” Ladenheim told VentureBeat in an interview.

“But I really tried to find ways that personality would emerge out of chaos. Much of our choreography stemmed from nine different versions of how you would say ‘fuck you’ to somebody with body language.”

HackPolitik chronicles the exploits of the nebulous online community, which has assailed governments, companies, and other organizations it finds objectionable — often with illegal measures like DDoS attacks. Observers tend to describe its actions as a mixture of politically informed protest and juvenile mischief-making, a byproduct of its decentralized nature. 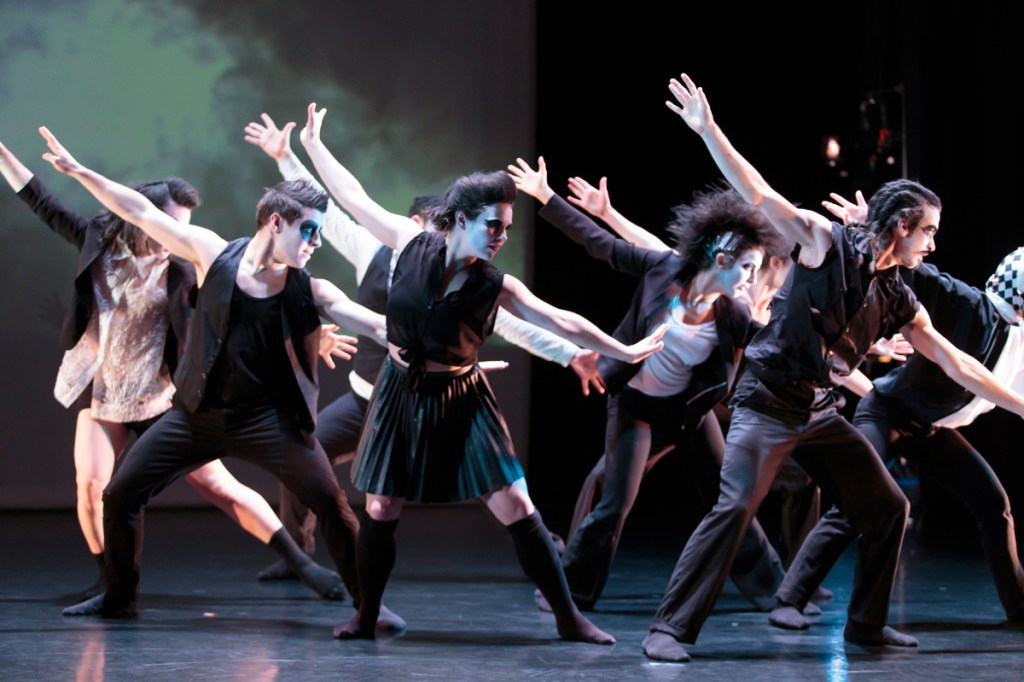 Although it lacks a clearly defined command structure, Anonymous has had its share of influential figures. Among others, there’s Hector Xavier Monsegur, also known as “Sabu,” a 30 year-old hacker who faces up to 122 years in prison despite serving as an informant for law enforcement; Jake “Topiary” Davis, a 21 year-old former LulzSec hacker who pled guilty to attacking a slew of U.S. government websites in 2012; and Ryan Ackroyd, also known as “Kayla,” a 27 year-old Iraq veteran who posed as a 16 year-old hacker girl and pled guilty to various cyber attacks alongside Davis.

HackPolitik focuses on these core figures, detailing their rise in the community and their eventual downfall. It’s difficult to absorb the concrete details through dance, as Ladenheim mentioned earlier, but folks familiar with the characters should be able to identify them by their movements and gestures.

Though the People Movers is working with a limited budget (it financed the initial creation process through a $5,300 Kickstarter campaign), HackPolitik includes some technological components to better convey its digital source material. For the show’s late-2013 premiere in Boston, Lane (the composer) electronically manipulated live music from the Juventas New Music Ensemble. That affected the mesh-like visualizations in the background, which would vibrate or shrink and expand in response to the music. At other times, the background imagery distorted live video streams of the dancers to help convey DDoS attacks.

The technological component “turned out pretty well, but I think with more time and a larger budget we could do some pretty exciting stuff,” said Ladenheim.

“We had some mixed reviews; but people from Anonymous, who I thought would be my harshest critics, actually loved it.

“The thing that’s really magical and sad about live dance is that you can’t really ever replicate it; it’s fleeting. You delete an email and it’s in your trash folder. You read an article months ago and you can click a few buttons to pull it back up. You can find anything you want on the Internet. So people have a hard time with contemporary dance, because you only have one chance to see it, and the next time it’s going to be different. It’s a case for it to be irrelevant, or a case for it being one of the most important things to invest your time in — it depends on how you look at it on any given day.”

The People Movers is holding a fundraiser March 25 to help finance HackPolitik, which Ladenheim is bringing to New York City later this year.

(Disclosure: I know Ladenheim outside of my reporting at VentureBeat.)