I’ll make this easy: Everything that anyone’s ever said and speculated on Titanfall is correct.

“It’s going to be great!” say the Xbox fanboys. True.

“It’s multiplayer only, so it can’t be that great!” claim the naysayers. Also true.

Publisher Electronic Arts and developer Respawn Entertainment release the ultrahyped Titanfall this week for the Xbox One and PC (and later this month for the Xbox 360). The military-style first-person shooter is similar in mechanics and tone to the Call of Duty games — which shouldn’t surprise anyone given that a lot of the same people who worked on that series formed Respawn.

While Titanfall will be instantly familiar and comfortable to Call of Duty players, it distinguishes itself with its highly nimble soldiers (called “pilots”) and the giant mechanized, walking tanks (called “Titans”) that they climb into and command. It’s almost difficult to go back to COD at this point, with its grounded, slow-by-comparison characters who don’t get to skip around using mini-jetpacks or drive four-story-tall death-dealing mechs. But Titanfall doesn’t necessarily give enough reasons to hang around for the long-term, either.

Besides giant mechs, you mean?

While Titanfall’s cover models are its monstrous Titans of course, you can’t dismiss its people-sized pilots, who are quite fun to play on their own. Counterintuitively, you may even purposely avoid playing as a Titan to run around in the flesh.

In almost all of Titanfall’s fairly standard modes (kill everyone, hold a point, capture the flag, etc.), you start each match as a pilot armed with a fairly normal primary weapon (assault rifle, shotgun, sniper rifle, etc.). You’re also equipped with a sidearm, an anti-Titan weapon (heavier weapons like shoulder-mounted rocket launchers designed to take down the big guys), and some additional gear or abilities that include grenades, radar enhancements, cloaking abilities, and more. (Yes, character customization — down to the type of scope you put on your guns — is very similar to what you’ve seen in Call of Duty without the more superficial options like the ability to swap out your sight’s red dot with a purple smiley face.)

But every pilot has their personal jump kit as well, and these — perhaps more so than the Titans themselves — are really what give the game its own identity. Once you’ve had a taste of double-jumping, wall-running, and parkour-like agility that the kits provide, it makes comparable military shooters like COD or Battlefield feel, well, less comparable.

It helps that all of the levels are vast enough to accommodate multiple Titans battling it out yet contain plenty of indoor areas and smart vertical design to make running around as a pilot feel just as empowering (giving up raw strength for cat-like maneuverability). The tradeoff, however, is that the overall speed may be a bit too much for less experienced gamers, negating some of Titanfall’s newbie friendliness (more on that below).

And with heavy-duty anti-Titan weaponry — plus the ability to climb on top of enemy mechs to bypass shields and rip out key components to expose more delicate innards that don’t hold up well against regular ol’ bullets — you’ll never feel shortchanged on the not-so-tall side of the pilot-Titan dynamic.

But what about those giant mechs?

As you scamper about as a pilot, picking up a kill here and there, you start building up anticipation for the big prize: “Titanfall.” An onscreen timer backed by audio cues from your in-game dispatcher (“Your Titan will be ready in 30 seconds”) counts down to when you can summon your tower of doom. As you eliminate enemies, the time to Titanfall lessens, speeding up the arrival of your new ride.

When time’s up, and you call for it, boom: Your mech drops from orbit in a sky-rumbling fireball and lands with an earth-shaking thunk — a ground-pound to end all ground-pounds (yes, this will kill any enemies unlucky enough to be standing right underneath). The Titan then sits there silently like a giant statue, hunched over, ready to pick you up and place you into its chest-cavity pilot’s seat. Once you’re in, you quickly light up your internal displays, stand your avatar up, then proceed to destroy with much, much, much more firepower than you were using just moments earlier.

The Titans feel heavy as they lumber down the streets of bases or cities that have turned into battlefields, yet with their own (limited) boost jets, they have a bit of zip to them. You get the exact sense of satisfaction that you’d expect when blasting the now-ant-sized pilots with cannons designed to blow up gigantic metal machines (same with a massive fist punch that instantly pulverizes on-foot enemies into bloody chunks). This is a different feeling of empowerment than what you were getting with the pilots — one that involves actual raw strength and brute force (but strangely, missile blasts and stepping on people both feel a little insubstantial by comparison).

And of course, Titan-on-Titan combat is a quite a sight, with these building-sized monsters bashing each other into scrap metal, especially from the view of a 6-foot-tall pilot. They’re not quite Pacific Rim in terms of sheer size and scale, but it’s all great stuff for a video game.

Yet you never feel invulnerable here, even if other Titans are nowhere to be seen. Pesky pilots are buzzing around — just as easy to squish as a housefly, and just as easy to miss as well. They might be hiding in a building, occasionally poking out a window to fire a homing rocket at you. Or one might be crawling up your back right now to “rodeo” attack you as described earlier (the main counter for which would be for you to exit your own Titan to manually expel unwanted riders).

It’s all a thrill-filled tug of war between the Titans and pilots, with brawn vs. speed, no one side feeling imbalanced or overpowered, and an excellent cadence between playing as the two (after the enemy team destroys your mech, it’s back to being a pilot and waiting for the next Titanfall). The action’s constantly fresh and constantly changing pace — again, making it difficult to go back to “normal,” more flat-footed shooters. 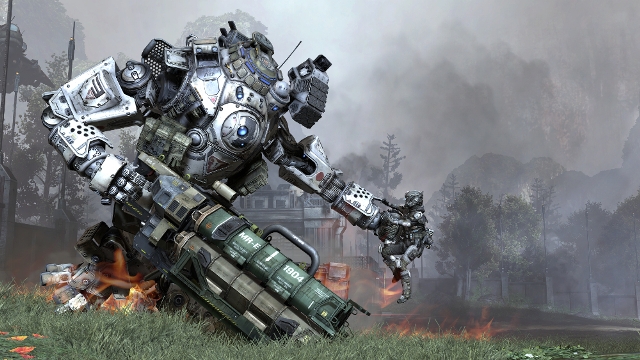 As you progress and reach certain levels or accomplish specific tasks, after matches, Titanfall will reward you with Burn Cards. You can use these “favors” in future battles for a temporary boost — faster movement, upgraded weapons, radar enhancements, the ability to force computer-controlled units to fight for you, shaved seconds off of Titanfall activation, etc. The game is fairly generous with these, and they further mix up the pacing, potentially changing your playstyle even within the same match. For example, you may stay on foot longer and skip out on bringing in a Titan if you’re lugging around an enhanced shotgun. But that “super-nuclear explosion when your Titan dies” Burn Card may encourage you to hide, wait for Titanfall, climb aboard, and then go find a group of unsuspecting Titans to hug.

Titanfall is very clever about a few things that make it easier for more casual players to enjoy the game. Badass Titans are available sooner with more kills, sure, but even if you don’t shoot a soul, you’ll still get one eventually. The basic Smart Pistol locks onto enemies for autokills, making precise aiming and quick hand-eye coordination less of a concern (but this isn’t so fast that experienced gamers would consider it cheap). And even though this was probably to help cover up for the smallish 12-player (6-on-6) limit, filling the arenas with computer-controlled Grunt cannon fodder (and slightly tougher “Spectres”) is actually a brilliant design choice. All players constantly have easy targets to shoot at (and they all barely shoot back), which offer both points and confidence. If you’re that Call of Duty player who’s constantly improving everyone else’s kill-death ratios except your own, then this game will make you feel better about yourself.

Multiplayer is intensely exciting and well-worth playing. But after a few hours of it, you’ve pretty much seen everything that the entire game has to offer. For those of you who buy a new Call of Duty and never turn on single-player, that’s probably fine, but even multiplayer doesn’t offer many different modes. For Titanfall’s first few weeks on the market, that may work, as it’s important to keep all of the players together in the same few rooms to optimize matchmaking (as opposed to spreading everyone out across different game types and keeping a few sections fairly sparse). But eventually, you’re going to wish that you had more.

Titanfall does offer a “multiplayer campaign,” which is a very shallow attempt to repackage normal multiplayer modes with a thin wrapping of story. The two different campaigns play through various skirmishes between the “evil corporation” IMC and the “power to the people” militia as they fight to … you know what? It doesn’t even matter. It’s a clichéd sci-fi setup that never does anything truly special. And outside of a few minor cutscenes and some voiceovers, you’ll never notice you’re involved in a bigger story once you start shooting.

Inside these campaign matches, the action is exactly the same as you’d find in normal multiplayer (kill everyone, capture and hold the points, etc.), just with some superficial reasoning behind why you’re doing what you’re doing (capture the points to hold important generators, for example, instead of just plain “capture the points”). So that I’m not a total grump about this, I will admit that some of the backstory provides nice flavor, explaining why certain levels are the way they are. Why is an enormous frigate crashed on this planet? What’s the deal with these indigenous dinosaurs that make Titans look like the ants? Where is everyone else besides the military folks trading punches and bullets? Multiplayer campaign will explain most everything.

Unfortunately, it doesn’t matter which side wins any particular chapter. Other than some small acknowledgment from the voiceovers, the results do not impact the overall story, and the next stage will be the same whether your team won or lost the last one. Shallow, indeed.

For a multiplayer-only game, Titanfall should have some amazing options and ways to play. But it doesn’t. It has a very healthy number of maps (15), but the lack of interesting new modes will make you feel shortchanged for not getting a single-player campaign. Hell, even shooters like Halo 2 from two console generations ago offer more in the multiplayer-options department. A lot more. It all feels like a temporary stop for Respawn on the way to Titanfall 2.

But what is there is so incredible, assuming you’re already into such games. (Don’t like shooting things? Nothing here will change your mind.) After almost 20 hours of playtime, my hands are cramped from gripping the controller so tightly — and I’m going back for more.

Titanfall releases for Xbox One and PC on Tuesday, and the Xbox 360 edition will hit March 25, 2014. We reviewed a prerelease version of Titanfall on the Xbox One at a dedicated press event hosted by Electronic Arts, who also provided GamesBeat with a downloadable copy of the game for the purpose of this review. 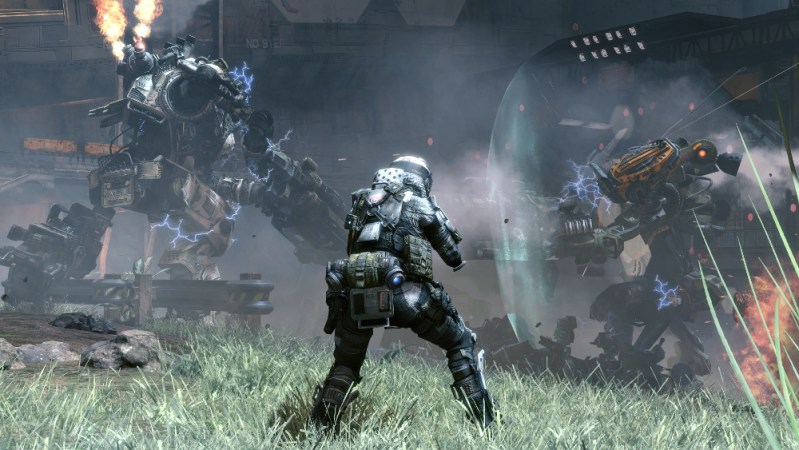 Above: We experienced some server issues in a prerelease environment, and it wouldn't surprise us if more problems pop up after the game's launch.