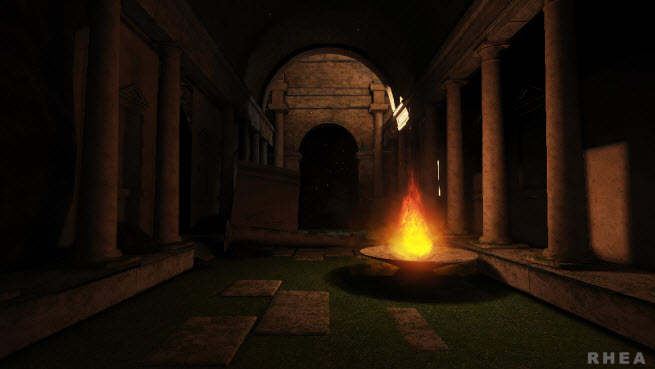 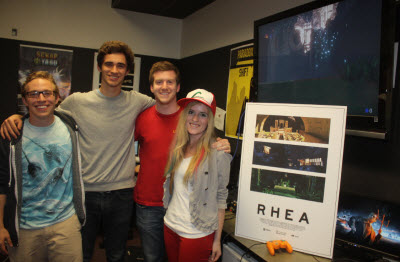 Rhea is a first-person adventure game for the PC and the Oculus Rift virtual reality goggles. You can explore the beautiful 3D landscape by flying through it or exploring the open world at your own pace. It mixes rails-based SSX-style flying gameplay with Myst-like style slow and thoughtful explanation.

The name comes from Rhea, the mother of Zeus in greek mythology. You put on the goggles and are transported into this world where, long ago, people could fly thanks to a gift from Rhea. They built a beautiful city and the created walls so no one could get in. But they misused a resource, ether, which enables them to fly but eventually leads to their disappearance. Your job is to explore the place and find out why. The challenge is finding your way into the city.

“We want to reward the player for exploring,” said Riley Pietsch, one of the development team leaders.

A series of obstacle courses challenge your capability to fly and whether you’re worthy of finding the lost civilization. That pushes the flight system to the limit.

The design of the levels are different because they have a lot more verticality than a typical game. You can use the Rift to look up and see places that you need to go, said producer Colleen Dimmer.

“If you don’t have that, you have to ask what’s the point of using the Rift,” she said.

Rhea has six levels, including some larger ones for flying. The team has 18 students.

The game uses some of the older technology associated with earlier Oculus Rift prototypes. So when I tried it out, it made me a little seasick. Oculus VR showed off a new demo, dubbed Crystal Cove, in January that addressed the motion sickness by reducing the blur that occurs when you move. The team included a dot in the center of the screen that I found to be helpful in reorienting myself whenever I got a little dizzy from the flying movement. The funny thing is that the fast-moving scenes have a lower risk of creating motion sickness than the slower scenes, Dimmer said.

“The Rift is really great because you can explore all axes of motion with a lot more immersion,” Pietsch said. 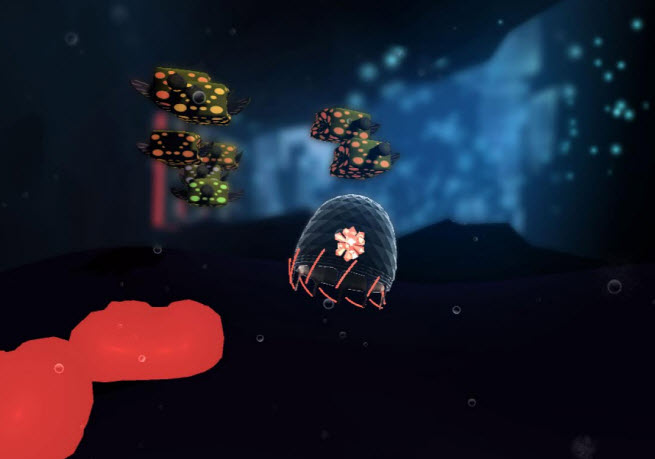 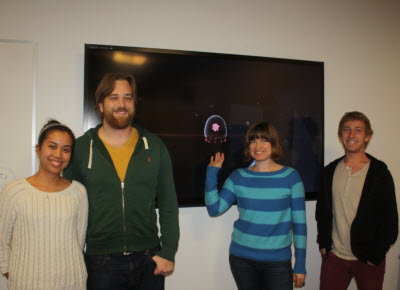 In Miralab, you get to experience what it’s like to be an immortal jellyfish. The title is an experimental underwater ecosystem exploration game, and it’s a game inspired by marine biology. The aim is to get the player interested the aquatic science.

You guide a bioluminescent being through the colorful underwater world and experience what it’s like to be in different parts of a life cycle. You start out as a baby, move to an adult, and even move on toward an aging, almost-senile jellyfish. The latter has a more psychedelic perspective on the world.

“We’re the experimental part of the class and have had a chance to explore unique mechanics,” said Amanda Tasse, the coleader of the student team. “We’re getting people interested in marine biology without being didactic. We’re doing it with a fun experience.”

The visual look is called “aquatic retro futurism, which resembles ‘Tron meets Child of Eden with an underwater sci-fi feel,'” she said. The environment has underwater caverns, plant life, and fishes. You have to figure out puzzles, like feeding fish and creating an opening for you to pass through.

The game has dynamic sounds through a whole level.

“It’s almost like you are playing an orchestra of underwater sounds,” Tasse said.

You can run into bioluminescent creatures. It has needlefish and dynamic kelp, which reproduce and grow. The jellyfish can also uncover lost memories from other immortal jellyfish. The game is split between an open design and a more linear sequence, said Matt Kane, co-team leader. There are some consequences to your actions, as you can have an impact on the ecosystem. You want to survive and find other immortal jellyfish.

“We’ve taken an emotional design approach,” Tasse said. “As a jellyfish, what might you be curious about? What does it feel like to explore the world at different life stages?”

The team has about 20 people. They’re working on three different levels and polishing them now. It is being built for the PC with the Unity 3D engine. You’ll be able to play it with a mouse or an Xbox controller.

Matt Kane, one of the leaders, said the game started as a simulation title with a five-hour experience. But that proved to be tough to do so the team shifted toward a linear, semi-narrative experience. The experience will be much tighter, targeting about 20 minutes.

“We started with unprecedented lofty goals and brought it back down to earth,” Kane said.

Tasse said that, after the class is done, she wants to continue building out the fuller simulation and more in-depth experience. 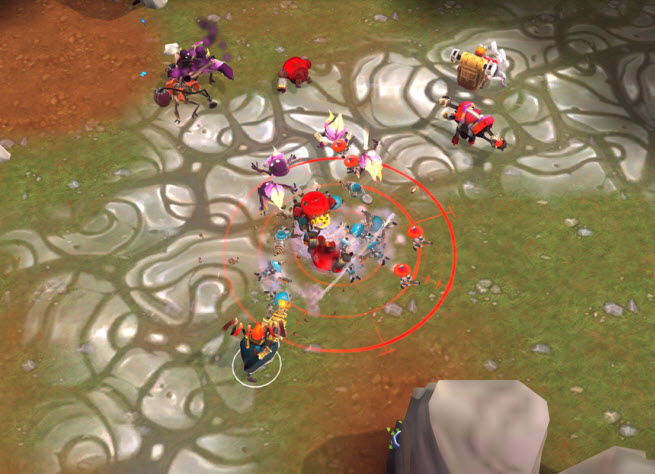 Above: Gregory’s army flees after failing to defeat Rosie in Maestros. 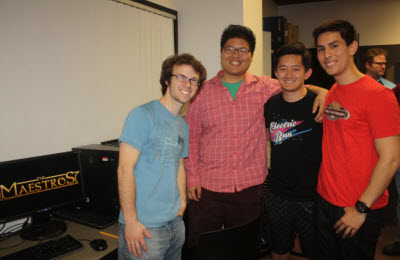 Maestros is a real-time strategy game akin to StarCraft. It is influenced by new multiplayer online battle arena games like League of Legends, but Maestros has its own unique gameplay and art style.

The title is built in Unreal Engine 3 and gives you a bird’s eye view of a battlefield. You command a human leader, a Tinkermeister, who is accompanied by smaller characters known as minions. You move from resource to resource, absorbing energy that enables you to build up the strength of your minions. You collect the energy by killing non-player characters.

“I really loved playing StarCraft and Warcraft when I was younger, but I had a hard time getting people into it because it was so complicated,” said Dru Erridge, student team leader. “I wanted to make a game that was simpler and you could be in the action sooner, which is attacking and having armies with full abilities.”

He pitched the game to USC’s game faculty and got approved. Now he runs a 45-person team.

In the game, you can send two minions to certain points that enable you to meld those minions into one stronger character with a special ability.

When you pass near some enemies, you can click on them to attack. But if you pass near enemies, your minions will automatically attack. You can pick up weapons like land mines, which you can drop to blow up your enemies. The animations for the action are quite elaborate.

I tried the demo out by diving right in. It would have been better to play the tutorial first, but I didn’t have the time and the team leaders coached me on what to do. The easy part is that you control your leader and don’t have to micromanage every single soldier. In this way, the team is trying to innovate within a crowded real-time strategy genre.

Erridge said, “It’s a fast-paced strategy game that is also a lot easier to get into than a typical game in this genre where you have a lot of systems to think about. We wanted to be able to send it out to friends and family to play it with them.”

I saw one playable race, but the team is building another fully playable race with different abilities, units, and weapons. Erridge will show an alpha version of the game off at the Game Developers Conference. Then the team will try to finish up a beta version by May.