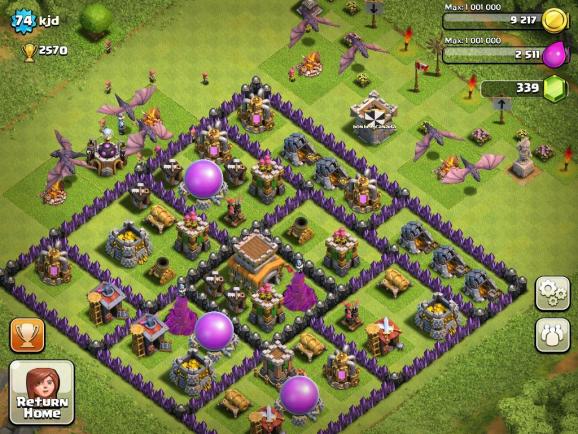 Clash of Clans is one of the most-successful mobile games around the world.

After months at No.2, Clash of Clans now tops the charts on all of its mobile platforms.

Supercell free-to-play strategy megahit is now the No. 1 highest-grossing game on both Android and iOS, according to industry-research firm Cowen and Company. On iOS, Clash of Clans tops the chart for both iPhone and iPad. Supercell first released the clan-battling title in summer of 2012 for iOS, but it only just ported it to Android in late 2013. Despite only having the iOS version through most of 2013, Supercell generated $892 million in revenues last year. More than $464 million of that was profit.

Clash of Clans isn’t Supercell’s only hit. Its farm simulator Hay Day is also performing well. It is sitting at No. 4 on the top-grossing charts for iPhone, iPad, and Google Play.

With Hay Day and Clash of Clans, Supercell is the top-grossing mobile publisher on iPhone and Google Play. It is No. 2 on iPad only behind King, which holds the No. 2 spot on the other charts. Between these two companies, they hold five of the most-lucrative games on mobile platforms. King’s Candy Crush Saga, Pet Rescue Saga, and Farm Heroes Saga hold various spots in the top 10 on iPhone, iPad, and Google Play.

“We estimate that Supercell’s Clash of Clans was the top-grossing game app across iPhone, iPad, and Google Play in February, after holding the No. 2 position for many months,” Cowen analyst Doug Creutz wrote in a report. “We note Supercell recently launched Clash of Clans on Android in late 2013, with the game quickly rising to match the company’s sustained success on iOS since Clans’ original launch in the summer of 2012.”

With the game performing so well on multiple app stores, it’s likely that Supercell will top its highly impressive 2013 financial performance this year.

In April 2013, Supercell held a $130 million funding round that valued the company at $770 million. In October, Japanese investment firm Softbank and the successful mobile publisher responsible for Puzzle & Dragons acquired a 51 percent stake in Supercell for $1.5 billion. That put the company at a $3 billion valuation.

King, meanwhile, is preparing for its initial public offering. This morning, it announced that is looking to get $21 to $21 per share, which would give it a massive valuation of $7.6 billion.