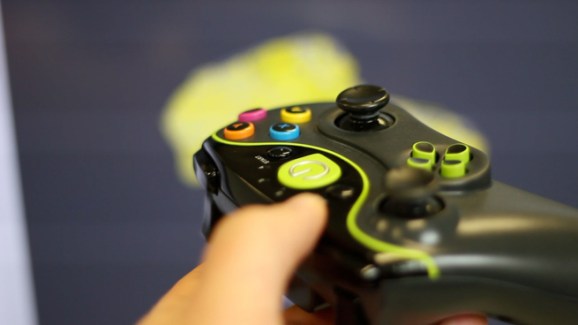 What could Google possibly do with a failed Android gaming company from the co-creator of the once massively popular Guitar Hero music sim? Perhaps turn its rumored media box into a pseudo-game console.

Google has confirmed its purchase of the remnants of Green Throttle Games, a gaming startup that developed a unique Bluetooth gaming controller for Android, Pandodaily reports.

Terms of the deal weren’t disclosed, but Pandodaily notes that cofounders (and former Palm employees) Matt Crowley and Karl Townsend have joined Google, along with other assets from the company. Cofounder Charles Huang, best known as the co-creator of Guitar Hero, still holds some rights to the company’s business and is now focusing on his karaoke startup Singtrix. It sounds like Google mainly wanted some key aspects of Green Throttle’s tech rather than the entire company.

With $6 million in funding from Trinity Ventures and DCM, Green Throttle was trying to do something different in the Android gaming space: Its controller hooked up to Android phones and tablets wirelessly for game playing. The idea was that you’d also hook up your Android device to your TV, so it would effectively serve as a game console. The company also developed an SDK so developers could add support to their games for Green Throttle’s controller.

“Mobile gaming is exploding, and new smart devices are becoming powerful alternatives to traditional consoles,” Huang told VentureBeat in an interview when the company launched in 2012. “We just need a simple and fun way for people to play games both on the go and on the couch. Our mission is to create great game experiences that bring people together — a big-screen experience where you can just start playing games on a television, as simple as that.”

While the company failed to make that vision come true, it’s likely a compelling mission for Google, which is rumored to be developing an Android set-top box for TVs. Having a built-in way to play Android games with a controller would be a huge plus, especially when other Android gaming solutions like Bluestacks’ Gamepop and Ouya require additional gaming hardware of their own. Apple is also rumored to be considering gaming support in an updated Apple TV.