With his Google Glass, Stanford University physician Dr. Homero Rivas pinpoints a target on the skin of an anatomical human model.

The surgeon and his assistant then direct their Glass at the target to reveal an augmented reality display on their screens. To their eyes, looking through the Glass, they can see the procedure illustrated step by step with images superimposed over the skin of the model. 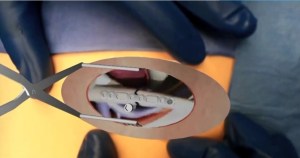 Above: MedicAR in surgery

Stanford University live-streamed that demonstration to physicians around the world. It wasn’t a particularly complicated procedure, but it was one of the first times that augmented reality has been introduced to Glassware for the benefit of surgeons.

Related: How doctors are using Glass to record surgeries and access patient records

Dr. Rivas was experimenting with a new Google Glass app called “MedicAR,” which was developed by European app maker Droiders. Dr. Rivas met Droiders chief executive Julian Beltran at a recent event and realized they shared a mutual interest in wearable tech. He does not have a paid relationship or consulting agreement with the firm.

“You don’t need to go in blind anymore,” said Dr. Rivas in an interview with VentureBeat following the demonstration.

“Now, we have an educated impression of where a mass is. We can better understand exactly where to make an incision so we can create less trauma.”

Augmented reality (AR) is a popular entertainment tool, but it has its limitations. Today, you’re usually required to hold a smartphone between you and what you’re viewing. Integration with smart glasses such as Glass will enable us to view augmented images without the barrier of a phone. It clearly has value for the entertainment industry and advertisers, but Droiders also sees opportunities for health care.

The Glass camera is mounted to the side of a wearer’s face, making true AR a challenge. But with MedicAR, the wearer can look up to the right for a video playback of the AR overlaid on the physical target on the patient — no modifications to the hardware necessary.

“Soon, I’ll be able to implement all the algorithms from the MRI, send it to Glass, and then sit in front of the patient on the examining table. I’ll lay my eyes on the abdomen and see the hologram of the MRI to determine exactly where the mass is,” said Dr. Rivas.

How long before your doctor is wearing Google Glass?

At hospitals around the world, physicians are experimenting with Google Glass. Google Glass is hands-free and uses augmented reality and voice activation to project data into our field of vision. The futuristic gadget costs $1,500 for developers in the beta explorer program.

As Arun Matthews, the chief medical information officer at Texas Tech University and a full-fledged Glass enthusiast, put it in a recent interview, “I dream about technology being seamless and invisible but constantly present; anticipating my needs with point-of-care decision support, but getting out of the way so physicians can be physicians.”

In his role as the director of innovative surgery at Stanford University, Dr. Rivas was among the first to recognize the promise of Glass for the medical field.

And unlike most hospitals in the U.S., Stanford Hospital is a fertile testing ground for new technology. Stanford’s surgeons, like Dr. Rivas, are often brought on to pilot the latest device or mobile medical app in their operating rooms. These surgeons speak the technology vernacular interchangeably with medical jargon. 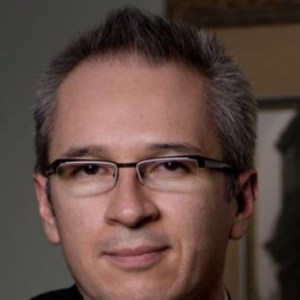 Aside from working closely with Droiders, Dr. Rivas is also keeping an eye on Augmedix, a San Francisco-based startup developing Glass applications for doctors. Augmedix, a graduate of health tech accelerator Rock Health, is still in stealth mode, but we hear from numerous sources that it’s focused on improving medical transcription.

Dr. Rivas envisions dozens of use cases for Glass. He expects that fellow surgeons will routinely perform surgeries in concert with medical experts located thousands of miles away. He could use the Glass camera to send a transmission of the surgery to a remote colleague and benefit from their expertise in real time.

(Those transmissions will need to be made secure in order for them to remain compliant with the health care privacy regulations known as HIPAA.)

Likewise, he hypothesizes that medical students will routinely use augmented reality to improve their surgical techniques. “That way, you wouldn’t need to use cadavers or real patients,” he explained.

It may sound far-fetched, but the reality isn’t all that far off. In September 2013, Droiders developed a Google Glass app for another surgeon, Madrid-based Dr. Pedro Guillén, to live-stream a surgical procedure to doctors located at 300 universities and hospitals in five continents. This was the first time an operation was recorded live through Google Glass and streamed globally to surgeons who could participate in an open dialogue via a Google Hangout.

According to Droiders, it’s not just surgeons who can benefit from the new smart-glasses apps. Spokesperson Paul Gailey Alburquerque said the company is also developing apps for aviation pilots.

In addition, we recently reported that the NYPD is beta-testing Google Glass, mostly for patrol purposes; and the U.S. Navy is getting onboard with smart glasses from Vuzix.

While the price tags for these wearables may be too expensive for most consumers, Alburquerque expects that industry will snap up the devices.

“We’ll see plenty of competition, but Glass will be popular with physicians and other professionals because it’s so lightweight,” said Alburquerque by phone.

Rivas said he’s keeping his fingers crossed that the price will drop in the coming years so surgeons can justify the purchase. While $1,500 may not be much compared to, say, an MRI machine, many hospitals recently invested in tablets, so Glass will need to provide significant value beyond what iPads can offer in order to justify a second round of tech investment.

Google Glass is slated for public release at the end of 2014, although the company has yet to confirm a precise date.