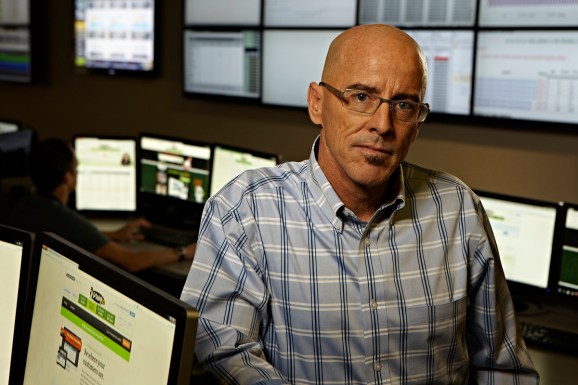 GoDaddy is gearing up for an initial public offering, the Wall Street Journal reports.

Chief executive Blake Irving has been mulling a 2014 IPO for well over a year. The website-registration and domain-hosting company pulled in approximately $1.4 billion in revenues in 2013, making it a hot prospect for Wall Street.

The Wall Street Journal cites unnamed sources, who say that the company is interviewing banks that would lead the underwriting of its IPO. Based on a typical IPO time frame, GoDaddy’s shares could begin trading in the second half of 2014.

A company spokesperson did not respond to a request for comment.

Bob Parsons founded GoDaddy in 1997, and until recently he was its CEO. Irving took over in 2013, and he revealed plans to rebrand the company in an interview with VentureBeat.

Indeed, the executive team has big plans for GoDaddy that go far beyond those controversial Super Bowl commercials. Irving is hoping to build brand-name recognition with small businesses, which won’t be easy since the company isn’t particularly well known in this segment.

“I see a very clear path of how to make GoDaddy the most valued, largest platform for small businesses in the world,” said Irving. “It is quite clear that no one is doing it right yet.”

With revenues pouring in, the company has the cash to spend on strategic acquisitions and quash competition. In the fall, the company bought Los Angeles-based Media Temple, a web-hosting service that is popular with developers, and Locu, a startup that helps small businesses get listed online. GoDaddy’s October purchase of Media Temple marked the sixth acquisition of the year.

2014 is expected to be a strong year for tech IPOs. Today, we saw Castlight Health shares soar almost 150 percent, and reports circulated that e-commerce giant Alibaba is nearing an IPO in New York as early as April.