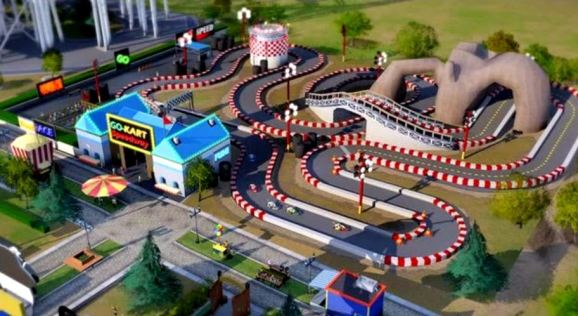 A go-kart track in EA's SimCity.

You can soon build a town in SimCity that lives off the grid. But in this case, “the grid” refers only to publisher Electronic Arts’ servers.

The next big update for the municipal-management title is in its final testing phase, according to developer Maxis. The company didn’t provide a specific time frame for the latest improvements, but it did say the update is coming soon. This is the patch that will remove the online requirement that caused a number of connection problems through the game’s first few weeks. Once it is live, would-be mayors will finally have access to a new single-player mode that will not check for a connection.

Update 10 is in final testing. Almost there Mayors.

Fans have requested a single-player mode from the beginning. Development took some time because the studio was building a whole new mode. It couldn’t just remove the online check from the standard game because many of the systems would break without multiple players. Maxis built the sequel, which is the fifth entry in the SimCity franchise, to work best when several people are operating towns in a region. In fact, nearly every mechanic relied on how well players were interconnected with one another.

Maxis announced the offline mode in January. It has let small groups of players test out the update to make sure it is safe and polished.

SimCity debuted in March 2013 to a variety of connection errors. After EA and Maxis finally established a stable server environment, players started noticing other issues. Primarily, relying on other humans is risky because they might suddenly abandon their mayoral duties. Many people stopped playing because of this.

“We rejected that idea because it didn’t fit with our vision,” she wrote. “We did not focus on single-city isolation that we have delivered in past SimCities.”