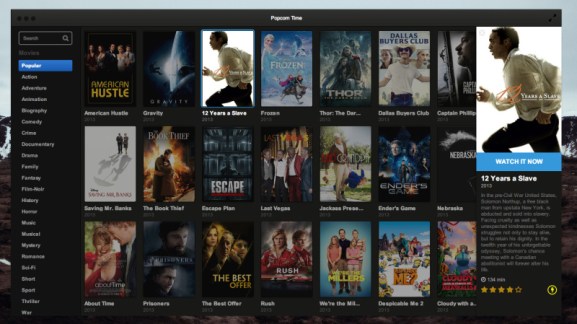 For a brief moment, watching movies via BitTorrent was just as easy as watching something on your Netflix queue.

The app Popcorn Time came out of nowhere a week ago with a slick interface that boiled down the messy torrenting experience into something simple. All you had to do was download the free app, find a movie, and wait for the stream (often in HD quality) to start.

Of course, Popcorn Time was just as illegal as downloading torrents manually. It simply added an elegant veneer to the dirty world of movie piracy. So it wasn’t too surprising when the developers behind the app announced yesterday that it was shutting down.

But while Popcorn Time’s creators may be walking away, it seems the app may live again: The torrent site YTS is taking on the project, reports TorrentFreak.

“We are in a better position copyright wise as for us, because it’s build on our API, it’s as if we have built another interface to our website,” YTS developer Jduncanator told TorrentFreak. “We are no worse off managing the project than we would be just supplying the movies.”

Update: The Popcorn Time project is now up on GitHub, and the new installers are available here.

I tested Popcorn Time out briefly last weekend, and I was shocked by how well it worked. It loaded up a 1080p version of 12 Years a Slave in under 30 seconds, and perhaps even more remarkably, I was able to skip around to various points of the movie easily. It’s no wonder the app was shut down so quickly.

While it’s unclear what exactly happened with the original Popcorn Time team (I imagine Hollywood studios brought the full weight of their legal teams against them), what they accomplished was still noteworthy. If piracy can be as easy as using Netflix, how will Hollywood respond?

“Popcorn Time as a project is legal. We checked. Four Times,” the app’s developers wrote in their farewell post. “But, as you may know, that’s rarely enough. Our huge reach gave us access to a lot of people, from newspapers to the creators of many sites and apps that had a huge global reach. We learned a lot from these people, especially that standing against an old fashioned industry has it’s own associated costs. Costs that no one should have to pay in any way, shape or form.”

Below, check out a brief demo of the Popcorn Time app: