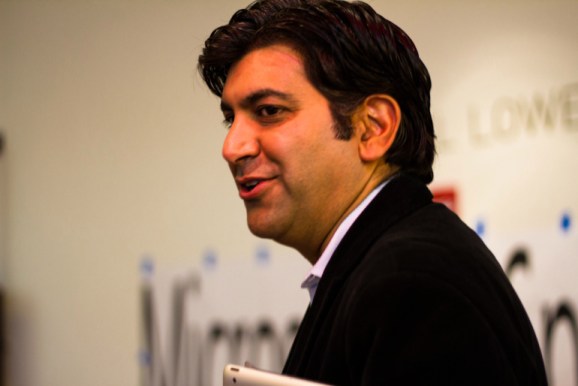 Since resigning as the White House CTO (and naming Todd Park as his successor), Chopra has been working closely with private company executives to help them formulate a health care strategy. Aside from his new gig at Box, Chopra is also an advisor to Apigee, an API management company, and a cofounder at an early-stage startup called Hunch Analytics.

Chopra’s big picture vision is to make it easier for patients to access an electronic copy of their medical information. Patients can choose to share this data with a care provider or keep it private. It’s far more secure than storing data on a thumb drive, which often leads to security breaches.

“When we wrote the Affordable Care Act, we envisioned a world where patients had a lot more control over their data,” said Chopra in an interview.

“The technology gives health providers the freedom to move data at an individuals’ behest without creating undue data breach risk,” Chopra added. “That is the scenario I see.”

Box announced just under a year ago that it would push into health care, with health care investor Missy Krasner leading that effort. “We want Box to be the cloud solution to manage all content in the health care sector,” said Box chief executive Aaron Levie in a recent interview with VentureBeat.

Box invested resources to ensure its service was compliant with the major security and privacy law, the Health Information Portability and Accountability Act, or HIPAA. The company built out its enterprise sales team, and now claims to have hundreds of customers in the health care sector, including Henry Ford Health System and the Beaumont Health System.

Krasner is now on board fulltime to help Box build out its cloud services for health care providers. Several months ago, she invited Chopra to judge a health-focused application challenge for third-party developers, run by Box and hospital system Dignity Health.

By phone, Krasner described the big vision for Box as a health care tools provider. She offered an example to illustrate how Box could fit in to the process: A patient sees a family physician for a routine check up. That doctor pulls up the electronic health record, and browses the patient’s full medical history online. Currently, however, if that patient needs to see a specialist outside the network, the onus is on them to retrieve their medical information. Most electronic health record providers deliberately make it a challenge to share patient data outside the network, so they can lock in hospital systems. Box can facilitate that, Krasner said.

“Patients should have a control panel with all their medical data, which they can choose to share or not,” said Krasner. Rather than expecting patients to be proactive enough to gather this information, large health-care companies might use IT tools like Box to initiate this effort.

“Aneesh [Chopra] is encouraging us at Box to be the ‘data locker’ for patients to access medical data from disparate sources,” Krasner explained.

Krasner formerly worked at Google Health, and learned first-hand how challenging it is to build a consumer health record. So it’s unlikely that she has unrealistic expectations about how easy this will be.

Chopra is no longer an active advisor to the White House, but he says he is “friendly” with the current administration, including Park. He is a frequent spokesperson on the topic of HealthCare.gov, the federal health care exchange, and recently penned a guest post for VentureBeat about how the private sector can leverage HealthCare.gov’s open API to create innovative services.