I stood in front of the Kinect’s sensor like a passenger awaiting a weapons check at the airport. After subjecting myself to its gaze, I moved even closer to the camera, first turning my head to the side and then up and down. Finally, it interpreted my image as an athletic, spandex-wearing superhero that looked vaguely like a generously idealized version of myself.

This was the day I met my “Awesome You,” a personalized in-game avatar for Kinect Sports Rivals on Xbox One that’s based on my own physical appearance — plus a heap of flattery. While camera-shy players might be reluctant to subject themselves to a digital makeover, Kinect Sports Rivals (developed by Rare and published by Microsoft) seeks to disarm any physical hang-ups by smoothing your rough edges and giving you an athlete’s physique. You can then place your avatar in six sports scenarios: soccer, tennis, bowling, rock climbing, wave racing, and target shooting. 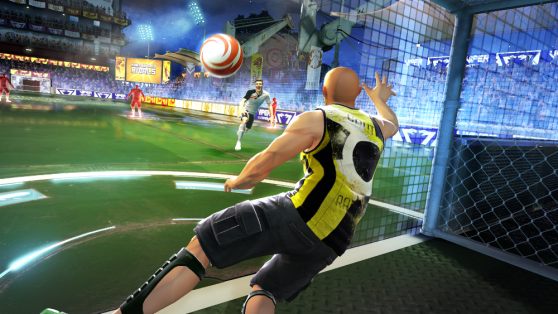 The Kinect captured my haircut’s style and color, and my avatar sported a beard that was a bit bushier than my real one. His jawline seemed sturdier and the cheekbones more pronounced. The real shock was in the frame – the Kinect Sports Rivals version of me looked like a barrel-chested bodybuilder with muscular arms and a rear that would make Magic Mike jealous.

Even if the effect is only virtual, this digital adulation was certainly successful at making me want to spend more time in front of the Kinect’s camera. It’s like looking into a fun-house mirror or bringing a boardwalk cartoonist’s caricatures to life. To achieve those kind of results in real life, you’d have to spend a lot of time at the gym and with a personal stylist. In this way, Kinect Sports Rivals represents a fantasy shortcut for a common life goal: looking 10 times better.

After the scan, you’ll want to invite your friends over so that they can meet the version of themselves that they always secretly hoped they’d be. For preteen players, Kinect Sports Rivals can also create avatars that don’t look so mature. 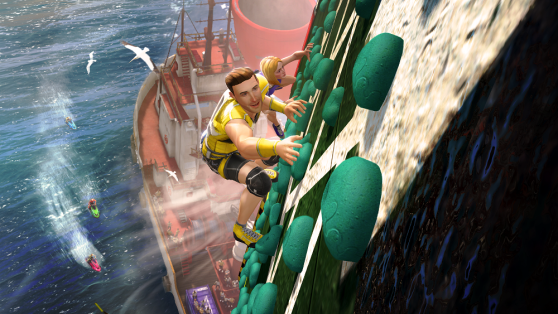 Creating your Awesome You is pretty special, but the majority of Kinect Sports Rivals is spent playing the six sports minigames, either by yourself or with a second player. While you watch, the Kinect will mimic your precise movements right down to your open or closed hands. Rock climbing is particularly fun since you have to close your hands to grip a ledge and then pull your arms from your head to your waist to scale the wall. Even though you’re not actually supporting your body weight, it’s still a moderate workout.

Even better, you can grab an opponent by the legs to send them plummeting. This is the only violence you can inflict on your virtual competitors, assuming that the shooting minigame doesn’t feature a Dick Cheney mode.

It’s easy to accept yourself riding in a Jet Ski race or climbing a massive rock wall without a harness when the Awesome You is performing right in front of you. Swinging a tennis racket and rolling a bowling ball also feel natural and satisfying, because they’re so similar to their real-life equivalents. It’s a lot like 2006’s Wii Sports — but without a controller to accidentally throw at your TV. 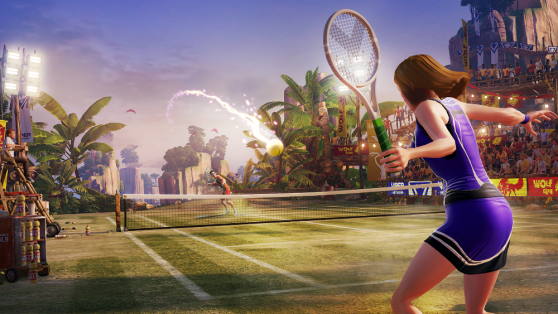 The lone misstep seems to be soccer, where kicking the ball sends it automatically to a predetermined destination on its way to the goal. Only blocking the ball from the goalie’s perspective feels like a challenge. In this case, it’d be better to buy a real soccer ball.

The one minigame I didn’t get to try in Kinect Sports Rivals is the shooting range, where the camera will arm your Awesome You with a handgun while the real you holds out your empty hand. Since this concept seems to have the most potential for action games, I’m eager to try it out a bit closer to the launch on April 8. 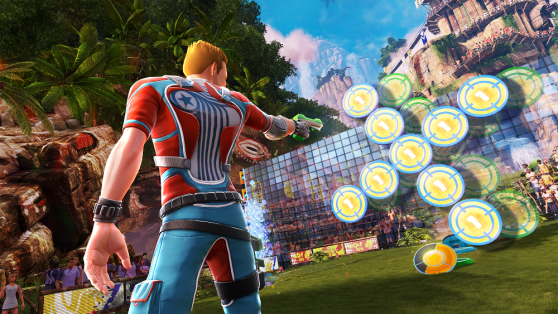 You can already download a free demo of the wave racing level on Xbox One, but it uses a premade character. It’s the personalized Awesome You creation tool that I think will really move people to play the game because it feels like much more than your typical interactive experience.

Allowing your Kinect to pay you the ultimate compliment and create an Awesome You is a unique type of wish-fulfillment. It’s an image that you’ll mentally carry into the real world long after you shut off the console.