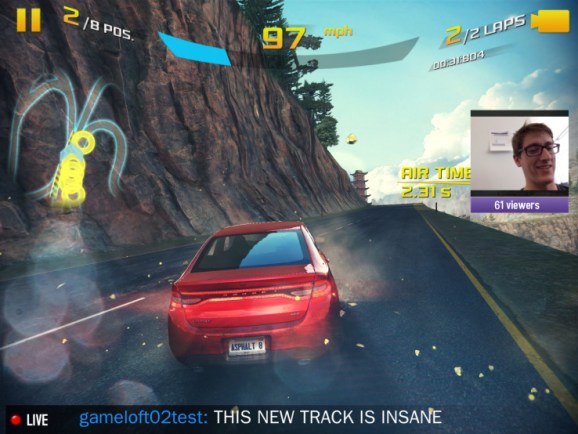 Asphalt gameplay streaming to Twitch from an iOS device.

Twitch livestreaming isn’t just a far-off concept for mobile — it’s coming to one of the Apple App Store’s top racing games this week.

Mobile developer Gameloft is incorporating Twitch broadcasting into its Asphalt 8: Airborne driving sim for iOS on Thursday. This will enable players to stream live gameplay to their Twitch channels along with voice over and video from an iPhone or iPad’s front-facing camera. Twitch is already a massive hit with over a million people using it to broadcast their gaming action from PC and consoles. The site has over 45 million monthly unique viewers, and it introduced its latest development kit two weeks ago that enables mobile developers to reach that potential audience. Twitch could help fuel further growth of the $16 billion smartphone- and tablet-gaming industry.

“This first-ever mobile game integration with Twitch opens the door for gamers to broadcast and share gameplay experiences like never before,” Gameloft vice president of American publishing Baudouin Corman said. “As one of our most popular games, Asphalt 8: Airborne made perfect sense to integrate the Twitch mobile SDK, and we can’t wait to see the excitement it brings to our users.”

Gameloft plans to show off how the broadcasting functionality works during a 24-hour livestream that it will hold on its Twitch channel Thursday.

This solution is just the first implementation of Twitch’s software on mobile. The tech is open to any mobile developer, so expect to see it in other games soon. So far, Twitch’s SDK is only optimized for iPhone 5S, iPad Air, and iPad Mini with Retina. It does not support earlier iOS devices (including the iPhone 5c) or any Android devices. Twitch told GamesBeat that Android support is in the works.

“Live broadcasting represents one of the most important shifts in the way people play games,” Twitch vice president of marketing Matthew DiPietro said. “Twitch has quickly found a home on consoles, so by partnering with Gameloft to launch the first streaming-enabled mobile game brings us one step closer to being everywhere that gamers are. Also, by being integrated into Asphalt 8: Airborne, one of the highest rated mobile games, should ensure it resonates with our community.”

Gameloft told GamesBeat that Twitch streaming doesn’t affect the performance of its title. The two companies worked closely together to get this working so fast — the Gameloft dev team said it operated almost as a “singular development entity” with Twitch.

These features could potentially open up mobile as a platform for e-sports. The popular competitive-gaming genre of multiplayer online battle-arena titles (think League of Legends on PC) have already seen a number of releases on tablet including Gameloft’s own Heroes of Order & Chaos. It’s difficult for those games to grow without an active online viewing community, and this Twitch integration could address that.