Apple is toying with the idea of creating a remote control for your iPhone, according to a newly approved patent application.

The company’s new remote control patent, which it first filed for way back in 2009, is focused almost entirely on giving you remote functionality for the iPhone’s camera. That means you’ll be able to snap group photos (that include yourself), record video easier, and more. But since this is Apple, I’m assuming the remote functionality will be presented in a way that we’ve not seen before.

According to the patent, the remote connects to an iPhone wirelessly via Bluetooth or Wi-Fi and can display any content on an external screen. The remote also offers notifications that you’ve taken a photo via flashing lights or changes to the user interface. I’m assuming this would be helpful if you’re concentrating on getting a shot and don’t want to stop to confirm that your iPhone did indeed snap a picture or record a video. You’ll also be able to edit photos and switch camera modes using the remote.

While this particular patent was submitted years before wearable gadgets started popping up, I wouldn’t be surprised if the technology described here is eventually used in a smart watch or smart glasses. For a closer look at the remote control concept, check out the screenshots from the patent application below. 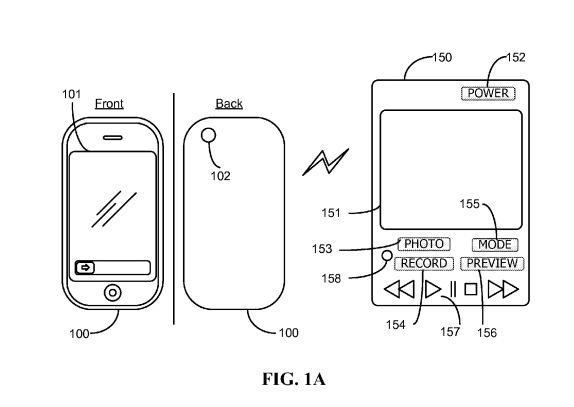