Gamevil makes hardcore mobile games for the South Korean market. Now it will test whether five of those games deserve to be on the global market. 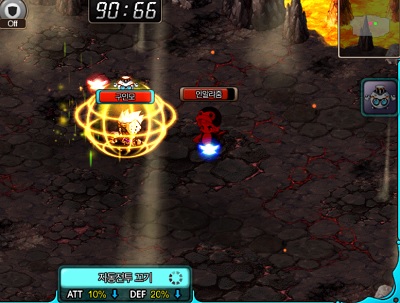 The Seoul-based publicly traded mobile game company is announcing today at the Game Developers Conference that it will publish five of its games from the Korean market worldwide in the iOS and Google Play app stores. The move is another sign that gaming has gone global and companies that were once content to be regional players are now trying to break into other markets — and other, massive streams of revenue in the multibillion dollar mobile game industry.

Gamevil’s push includes Zenonia Online, a fantasy role-playing game with fast and furious action; Dragon Blaze, a simulation RPG with collectible heroes; Dungeon Link, a puzzle-fantasy RPG that resembles GungHo’s Puzzle & Dragons; Elements Epic Heroes, a classic massively multiplayer online game where you can party with four players and go on raids; and Mark of the Dragon, a Clash of Clans strategy clone where you use dragons to try to burn your opponent’s castle.

The Zenonia fantasy game series put Gamevil on the Korean gaming map, and its Zenonia Online has been a big hit on the Kakao mobile messaging network, where it has gotten 2.5 million installations in just three months. It has real-time multiplayer combat. It will launch sometime this year, said Gamevil spokesperson Eric Cho in an interview with GamesBeat.

A number of these have synchronous multiplayer online, a feature that works well on South Korea’s fast wireless networks but may not work so well in the U.S., where speeds aren’t as good as in the publisher’s homeland. While they will work on faster networks, these games would no doubt enjoy broader audiences if people could play them anywhere there is a mobile signal.

Gamevil had another game lined up for the press event, but it decided to hold back on announcing it.