Reading the news isn’t a difficult task for most people, but finding the most interesting news of the day probably is.

The folks at Nuzzel, a news aggregation service that launches today, can certainly sympathize.

You log into the startup’s website using either Twitter or Facebook to see an overview of what your friends are sharing, what their friends are sharing, and news you probably care about even though no one else is talking about it yet. It does this by finding what people are sharing the most among your social networks and presenting it in a way that’s much less cluttered than flicking through your Twitter or Facebook feeds.

This idea is already available on a slew of other services (both from popular apps like Flipboard as well as a raft of dead services not worth mentioning), but no one has really nailed it. Yet Nuzzel may have found a sweet spot by attempting to show you a collection of interesting daily news from the perspective of other people.

“I call what Nuzzel does a sort of two-factor relevance,” said Nuzzel (and Friendster) founder Jonathan Abrams in an interview with VentureBeat. He explained that most people are friends with others who share similar interests and thus care about the news they share. “But because your friends are talking about that news, it adds another layer of relevancy.”

That social layer of relevance is what Nuzzel does well. 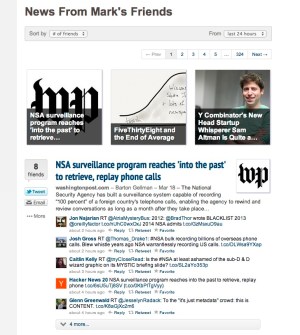 Take for example someone who is interested in following entrepreneurial news but doesn’t really know many who discuss it. As part of its public launch, Nuzzel will now let you view a public feed for notable people in the industry like investor and Dallas Mavericks owner Mark Cuban who are well versed in technology and startup culture. And you won’t just get the news — you’ll also get the context of why someone shared that report in the first place via Tweets and other comments. (Check out the screenshot above for a closer look at a public news feed.)

You may make your Nuzzel news feed private, but Abrams doesn’t expect that many people will go this route given that sharing news is usually a behavior people want others to see.

From there, Nuzzel can make recommendations for who you may want to follow. However, if you don’t feel like altering your social networks, you can always just get your technology fix directly on Nuzzel itself.

Abrams said his road map for Nuzzel includes calling out digital publications on separate news aggregation pages that push the material people are responding to the most — something that would be valuable to publications that produce over a hundred articles per day. He also plans to launch a Nuzzel iOS app in the near future and add integration for shared news content from LinkedIn and Google+.

In addition to today’s public launch, Nuzzel also announced that former Friendster exec Kent Lindstrom will be joining the startup as the chief operating officer, which brings the total number of employees to four.

Founded in 2012, the San Francisco, Calif.-based startup has raised a total of $1.7 million in funding to date from a number of notable investors, such as Dave McClure of 500 Startups, Eric Ries of The Lean Startup, George Zachary of Charles River Ventures, Ronny Conway of Andreessen Horowitz, and Jeff Clavier and Stephanie Palmeri of SoftTech VC.