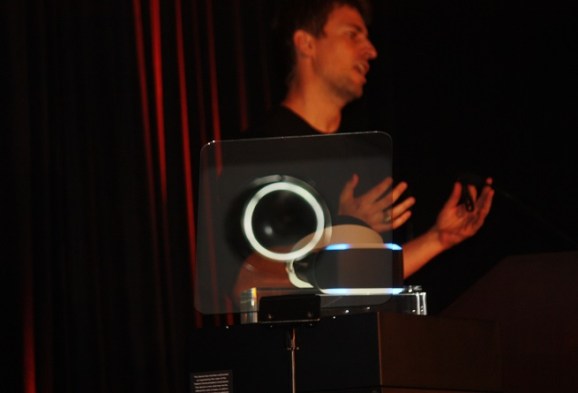 Richard Marks of Sony shows off Project Morpheus at the 2014 Game Developers Conference.

SAN FRANCISCO — Sony came up with six different technologies to design its new virtual reality headset, Project Morpheus, which it unveiled this evening at the 2014 Game Developers Conference.

Richard Marks, the co-creator of Morpheus and many of Sony’s past control-related technologies, said that the company had to create groundbreaking technology in sight, sound, tracking, control, ease of use, and content. The publisher is still working on these technologies and it asked game developers to work on them, too, so that they can collectively produce great virtual reality experiences, where you feel like you are inside a world.

“If we can nail these experiences, virtual reality can be a mass-market industry,” Marks said.

On the visual side, Marks said that Project Morpheus required Sony to develop a high-resolution display, specialized optics, and low persistence. The latter is one of the key technologies that keeps you from getting “seasick” while playing a game with the headset.

“Equally important is sound,” Marks said. “In VR, sound is even more important” because it helps you orient where you are in the world.

Ultimately, what Sony wants to create is a sense of presence, or a feeling that you are immersed in a virtual world, said Shuhei Yoshida, head of Sony’s worldwide game studios. He acknowledged that other pioneers like Oculus VR have also made great strides toward creating consumer virtual reality technologies — and that Sony’s own researchers have been excited and inspired by Oculus’s work.

Without tracking, you would just have a “personal theater on your head.” As you rotate or bob your head, the system follows your movements, and the images move with you as designed. Features such as parallax contribute to “presence,” or the feeling that you are inside a game.

Control also matters a lot. Marks was the co-creator of the PlayStation Move gesture controller. The control with Morpheus uses the PlayStation Camera and the technology behind Move.

Marks said the system also has to be easy to use.

“That’s how you get mass adoption,” Marks said.

Sony is unveiling the tech at GDC because it needs developers to start making games for the system. Sony is working on authoring tools and get developers on games. Partners include Unity, Havok, Wwise, Gigantic, Autodesk, DDD, Criware, Silicon Studio, Epic Games, Bitsquid, Crytek, and Fmod.

One of the challenges these companies face is where to position your arm in a virtual world. You don’t want “clipping,” or putting your hand through a virtual world (or a real one if you’re standing too close to it).

“This is like a great time,” Marks said. “This is the Wild West. It’s a once-in-a-career opportunity. How often do you get to work on a new medium?”