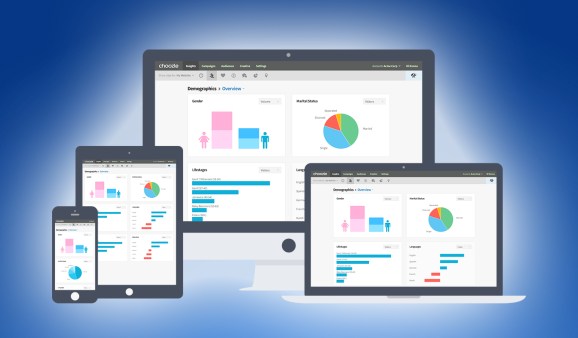 Choozle works across a variety of devices.

Choozle CEO Andrew Fischer describes his company as a “digital agency in a box.”

The company announced $1.1 million in new financing this morning to coincide with its emergence from beta. The new Choozle has far more functionality than the old platform, which primarily served as a media creation tool. Today it’s part analytics tool, part data visualization tool, and part ad-buying tool, with support for real-time bidding (RTB) across display, mobile, social, and video ad networks. So with Choozle, marketers can gather consumer insights, create media, and launch campaigns all in one place.

“We’ve kind of democratized and distilled the ad-tech stack into one simple and easy-to-use platform,” Fischer told VentureBeat.

The platform (in its current iteration) has only been live for two weeks, but Choozle has already racked up 25 customers and is adding around five new ones each week, said Fischer. That client list includes Britannica and Merriam-Webster, as well as businesses and smaller agencies that don’t have the resources or capabilities to employ the full ad-tech stack.

As a startup based in Denver, Colo., Choozle is intentionally avoiding the coastal markets, tending to focus its sales efforts more on middle America — cities like Denver, Boulder, Kansas City, and St. Louis. It’s largely targeting the low-hanging fruit: companies that aren’t running any ad tech software at all.

Choozle competes with marketing tools from companies like Google, Adobe, and Oracle, but Fischer thinks his platform’s broad functionality and ease of use set it apart.

“We haven’t seen anyone to do it end-to-end like we have,” said Fischer. “I think we’ve got a highly competitive product against a lot of companies that have raised tens of millions of dollars. We’re very scrappy.”

Choozle raked in around $300,000 in revenue last year, said Fischer, but has since changed the platform substantially. The company raised around $500,000 in late 2012 to build a media creation platform, which remains a substantial piece of Choozle in its current iteration — but the team had bigger, broader aspirations.

This new $1.1 million financing comes from Great Oaks Venture Capital as well as some strategic investors. The company currently has nine full-time employees and five contractors.

Choozle pricing starts at $199 per month — “a fraction of the cost of what’s currently available on other media management platforms,” said Fischer.

Fischer used to head up sales and business development for a startup called Passenger, but this is his first experience as a founder. He’s exhausted, he said, but it’s a dream come true for him.

“It’s by far the hardest I’ve ever worked in my life, but it’s the most fun I’ve ever had.”