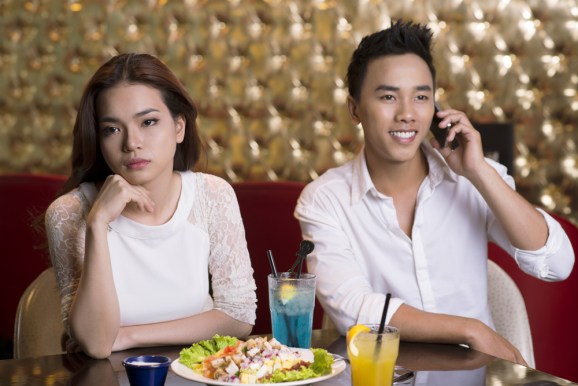 If you think checking a smartphone at a dinner table or in a movie theater is offensive to others, buckle up. A new report says such “electronic displays of insensitivity” (EDIs) are getting worse.

The study, “Digital Divisiveness,” was conducted by Joseph Grenny, co-author of the book Crucial Conversations: Tools for Talking When the Stakes Are High. He told VentureBeat that nearly 90 percent of respondents said the situation is worse than a year ago.

The report is not about whether electronic devices are reducing our social communications. There are indications that, in fact, sociability is being redefined and expanded by digital devices. Instead, it is focusing on situations where a mobile device is literally drawing attention away from the non-electronic, in-person experience.

Grenny relates an anecdote of a woman who emailed her husband during dinner. She was sitting across from him as he remained engrossed in his BlackBerry.

Perhaps you’ve paid $12.50 a ticket to see a first-run movie, only to have it marred by the brightly-lit smartphone screen and tapping keys of an alleged moviegoer a few rows away.

Or maybe you’ve been in a train car while a fellow passenger’s loud, interminable, and thoroughly uninteresting phone call gave you much more information than you ever wanted about their apparently complicated social life.

Ninety percent of Grenny’s respondents reported that their friends or family have stopped paying attention to them at least once a week because of a digital device. Twenty-five percent said EDIs have caused “a serious rift” with a friend or relative. More than half have witnessed an EDI when they were talking in person to a customer service representative.

“There’s an apparent blindness to what we’re doing,” he told us, “because 87 percent say this is inappropriate or intrusive, but you don’t get people saying, ‘I’m one of those [people].'”

The report is based on an online survey this month of 2,025 people who are subscribers to Grenny’s newsletter, Crucial Skills. The newsletter and accompanying website are oriented toward improving interpersonal relationships and leadership skills, so the sample pool may well be somewhat more sensitive to interpersonal slights than the general public.

There is likely also a generational divide, especially since the report skewed to ages 31 and older. Those who can recall a time when smartphones were not commonly parked on a table during a meal will undoubtedly have a different tolerance than others.

But even millennials may someday throw up their hands when trying to have a conversation with someone whose attention is being shared with Google Glass. Once wearables become really popular, smartphones may seem like the good ol’ days.

Mobile devices only started moving into the general population in the U.S. during the mid-1990s, so acceptable norms are still being worked out. Grenny told us, “We’re still at the first stage of establishing the norms, but the speed at which a norm sets in is the speed with which people will confront it publicly.”

In other words, social practices become norms if you don’t resist. He recommends such tactics as setting expectations during occasions like meetings or family dinners, asking politely, spelling out your specific request (“We need your full attention in this meeting, so please turn off your cell phone”), or alternatively, describing the consequences to an offender (“Your screen light is disturbing my experience of this performance”).

If all else fails, Grenny suggests, “Let it go.” Acquiesce, knowing that your intervention was another step toward preventing the norm from settling in.