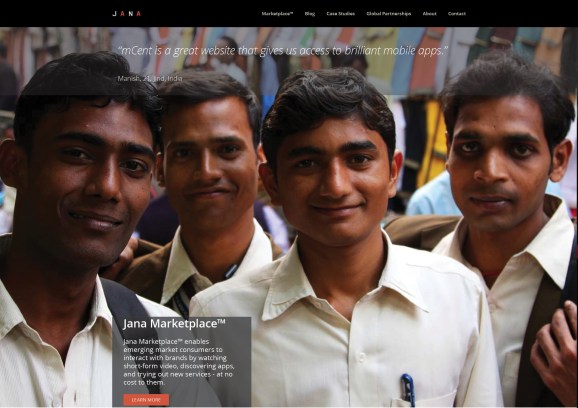 Facebook depends on its 1.31 billion users to contribute their data and attention for free, but mobile rewards company Jana plans to pay 3.48 billion mobile users in emerging markets for theirs, with free airtime or services.

Organizations from the U.N. to Coca Cola use Jana to pay people in 102 countries to watch ads, participate in sales promotions, fill in surveys, and get their friends to do the same.

Today the company announced Jana Marketplace, which lets Jana users interact with brands by watching videos, discovering apps, and trying out new services. Users in emerging markets can buy a $25 smartphone but often will not try new apps, watch video, or share it because of the data costs. Jana’s clients pay those costs in return for users’ attention. Lifebouy soap, for example, used Jana Marketplace for a campaign in India that promoted a video on the health benefits of hand-washing.

“We didn’t give them any airtime for sharing with their friends,” Jana’s chief executive Nathan Eagle said in a recent interview with VentureBeat, “and yet I think 30 percent or 40 percent of people shared it anyway.”

A personalization algorithm called mCent Match ensures that the content is relevant to an individual’s interests, location, culture, and past behavior. “What works for getting people to refer friends in the Philippines doesn’t work at all in Pakistan,” says Eagle, “So we are becoming local experts in a lot of these markets now.” Jana, which is based in Boston and launched in 2009, is most heavily used in countries like India, Indonesia, Philippines, Nigeria, South Africa, Mexico, Brazil, and Argentina.

But Eagle’s vision for Jana is much bigger than marketing. “While it’s great to be able to try to sell more shampoo, from my perspective the thing we are doing is to try and infuse capital into people’s pockets. We can pay money into the pockets of 3.48 billion people in denominations as small as 10 cents and friction free. No other company on the planet can do that.”

People in emerging markets spend a considerable chunk of their income on mobile services. “The average person, and this is true in Nigeria, it’s true in Argentina and in the Philippines, the average mobile phone subscriber spends 10% of their day’s wage on mobile air time,“ explains Eagle. ”It’s an extraordinary amount of money. Why this matters is that I think we have a chance to be able to reduce that in half, which ultimately gives them 5% more money in their pocket.”

Much of the Internet economy still depends on users volunteering their data for free. Eagle thinks people should see their personal data as an asset. “When 10 cents really could move the needle for a woman in Indonesia, it feels like we should figure out how to get our platform to enable that to happen. She is giving data all the time. Think of that data as her asset, as her property. (We are) starting to get people to think about their data as having intrinsic value and something that they should command a premium for rather than just give away, and especially give away to these multibillion dollar companies.”

One of the things Jana’s clients pay users for is surveys. “What are their attitudes towards laundry detergent or this particular EA game or this brand of … cola?” says Eagle, ”What this has turned into is almost like a data marketplace. People give us data in a very explicit way, and we are paying them for their personal data.”

It’s not just brands that use Jana to pose questions to the world. CNN used it to gather the opinions of 20,000 African panelists about the selection of the new Pope. More recently, Jana surveyed users in key countries on their usage of Whatsapp versus Facebook. “If you ask people on the ground, what is the messaging client that you use, it’s really easy to understand why WhatsApp was able to command such a premium valuation. It was like 70% versus Facebook’s 2%. There were really radical extremes.”

Jana’s latest research was on attitudes to economic inequality in countries like Brazil and South Africa and how the new middle classes there view the extremely wealthy people in their society. “The results were actually a little bit disturbing, “ says Eagle. “People were talking about wanting to go to the streets and participate in protests, especially in the places where you are already seeing this happening – Brazil, Venezuela, Thailand.”

Tackling economic inequality is, in fact, Jana’s ultimate raison d’être.“There’s $200 billion being spent on advertising for the developing world,” says Eagle. “It’s going into the pockets of the very, very few. We are redirecting advertising dollars away from the pockets of the people who own the billboards and the radio stations or the TV channels, or the ad networks — and the Facebooks for that matter — and redirecting that money directly the pockets of consumers. If we can figure out how to shift that economic power from the center to the periphery, we really can make a major change. We are not building yet another email app or widget. We are trying to do something that ultimately will have a pretty massive impact on an extraordinary number of people. ”