The idea of making money playing video games is something that appeals to most gamers but remains a dream to all but a few.

Diablo III’s real money auction house, however, enabled any player of the PC action role-playing game to legitimately buy and sell in-game items for actual cash. It inspired some creative traders, some of whom worked just 30 minutes a day turning virtual items into real dollars.

For a game built around collecting bigger and better gear, Diablo III’s auction house was a huge deal. Intended to disrupt any gray-market item trading and reduce fraud, while offering a service developer Blizzard Entertainment thought the community wanted, it courted controversy from the start.

With Blizzard pulling the auction house completely yesterday — less than two years after its launch — GamesBeat wanted to find out more about the gamers who earned big and the secrets of their success.

By day, Christopher Antoni is a computer engineer. On the side, he likes to program video games for fun. He also has a background playing massive multiplayer online games, such as Blizzard’s World of Warcraft and NCsoft’s Guild Wars.

When he heard about the Diablo III real money auction house (RMAH), he decided he’d try making some money. “I figured I had a leg up because I could determine what players wanted in the game fairly early on, just from previous experience in other games,” he told me via Skype. “And it worked out pretty well.”

Antoni was making a good thousand dollars a month on the RMAH at its peak — and even more from selling guides and running a forum that helped others do likewise. “There were multiple people emailing me doing the same,” he said. “So it wasn’t just me making money here.”

“This game was a huge disappointment,” said Antoni. “I feel that there were like six million people who started and there were probably a million left after the first two months.”

The auction house also reflected both Diablo III’s early success and its subsequent decline. “Early on there was a peak period,” said Antoni. “We had a bunch of issues with launch, and that hurt it. And then what would happen was, every time there was a major patch, the auction house would see this flurry of activity and then it would just die like a month later.”

Antoni used these renewed periods of interest to sell the kind of items Blizzard never expected to feature on the auction house. “Any time you had an influx of new players or people coming back to the game,” he told me, “I had a really easy time selling low-level stuff. Even stuff that had no level requirements I could sell for a couple of bucks.”

His highest profit item was the Mempo of Twilight, a legendary helmet that, with the right stats, would sell for 700 million to 900 million gold. Converted to dollars, these sold for about $50 a pop.

What surprised me most talking to Antoni was that these items weren’t ones he’d pick up playing Diablo III. In fact, in his own words, he “almost never played the game.”

While not strictly true — he did get all the classes to level 60 in order to learn them and explore some builds — the majority of his trading success came from simply buying and selling on the auction house, using it a lot like eBay.

Having invested some initial time in learning the game, and what was and wasn’t valuable, Antoni then spent about 30 minutes a day looking for stuff to buy and flip for profit. ”I could sift through and find the good items and then put them up in such a way that others could find them. That was the secret,” he said.

Antoni used other classic eBay tips, too, like buying resalable items at the last-minute, timing his own auctions carefully, and bidding unusual amounts to help beat last-second rivals.

“It didn’t take a lot of time,” he told me, “but that being said, you needed experience. You needed time invested over a long period, and if you didn’t do that then you couldn’t do it fast because everything was new, and too big and too complicated.”

The auction house’s clunky interface didn’t help players looking to buy items for personal use, according to Antoni, but it did unwittingly help the item traders. “The problem with the auction house was the interface,” he said. “The nature of Diablo III is that of a ridiculous number of worthless items and a small percentage of valuable ones. People couldn’t use the auction house properly to find the really good items. It was so convoluted and difficult to search with unless you really knew what was going on. I think they tried to have a solution that was a little too convoluted. It needed fine-tuning, and, like most things in the game, they rushed it.”

Antoni’s time selling on the auction house wasn’t profitable enough to replace work, but he wouldn’t want it any other way. “I think I’d be a little scared of making a living [from Diablo III] because of the amount of time invested,” he said. “Making $40-$50 a week was probably the cap for most people. Some people were able to invest the time and really learn it and make a couple hundred bucks a week.”

There was one guy, however, who made more on the auction house than Antoni himself. “Obviously, I was making more [overall] from helping people because of the sheer number,” he told me. “But I was laughing — I’m like, ‘You should be teaching these guides, man. You’re doing better than me.’ Some of that was just his persistence. He was willing to sit there and win a bunch of bids. He spent a lot of time monitoring it.”

But as Antoni said, “Because you’re making money, you have to equate it to how much is this worth compared to a job.”

Kevin Krizan followed Antoni’s tips for auction house success, purchasing his guide and spending time on the forums. While it didn’t earn him a fortune, he was more than happy making some extra cash with limited effort.

“I spent quite a bit of time at launch just playing the game, which included leveling my barbarian,” Krizan told me via email. “But once I got the hang of things and moved on to other games or activities for leisure time, I got into a routine of logging in to check the auction house in the morning before work, listing my auctions for the day and bidding on and buying items to resell.” 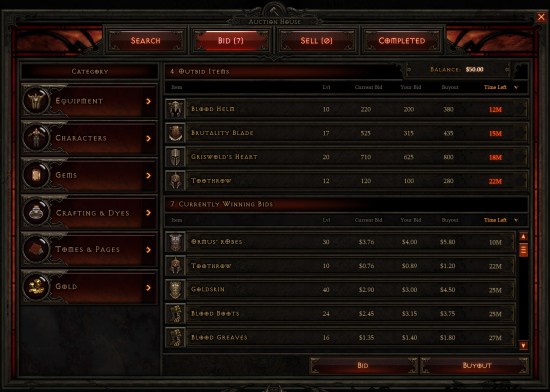 “Using this strategy, I was making about $5 a day or so, and it was interesting to learn more about new markets and try to find other ways of turning a profit,” he said. “Nothing earth-shattering, but $5 a day adds up.”

Krizan says that he could have earned more by flipping items multiple times each day, but “it wasn’t worth the time and effort at that point.”

Like Antoni, Krizan had a background in World of Warcraft. “I spent a lot of time learning how to make gold in [WoW] through farming, questing, and playing the auction house.”

“I learned that an easy way to make extra gold on the [WoW] auction house was to buy uncut gems and use my max-level Jewelcrafter to cut the gems and re-list them for a profit,” he said. “I watched the markets for a while and learned what prices certain cut gems sold for. Once I had my selling price, I simply would search for uncut gems and buy any that were under a certain price where I would make a profit from cutting them and relisting. For example, I’d buy a rare red gem for 50 gold, cut it, change it to a strength gem, and sell it for 100 gold.”

This method enabled Krizan to spend more time actually playing World of Warcraft, raiding and improving his character and not farming gold.

For Diablo III, the opposite was true. The real money auction house was what kept Krizan interested once the gameplay itself lost him.

“People have been buying and selling virtual goods for decades, said Krizan, “so the concept was a good one — I just don’t think the Diablo 3 platform was strong enough to sustain it.”