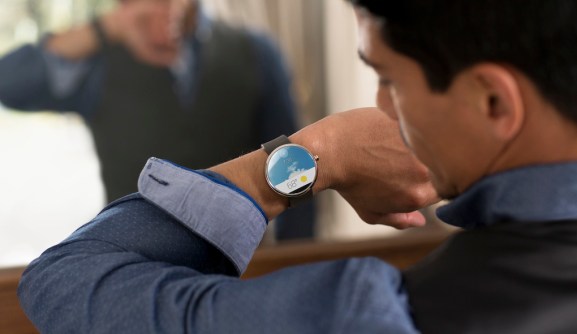 One of the biggest innovations in Motorola’s upcoming, high-tech Android smartwatch is that it looks like … a wristwatch. The irony of that isn’t lost on Motorola.

Even though the Moto 360 represents the next generation of what smartwatches can be, Wicks said his biggest inspiration for the gadget’s design came from the most common way of representing time over the years: A circular watch face. That’s something that goes back to the days of sun dials.

“[We said], let’s not swim against a cultural current, let’s go with it,” Wicks said. “80 percent of watches sold around the world are round. … In redesigning our timepiece, we felt it was important not to try to defy gravity.”

Coming from years of square-faced smartwatches that didn’t really do much, the Moto 360’s round design and Google Now-driven interface feels like a breath of fresh air. Of course, other smartwatches based on Android Wear will offer many of the same software features, but it’s clear that Motorola also spent plenty of time focusing on the design of the watch itself.

In that vein, Motorola chose to use leather watchbands to give the Moto 360 a more premium feel.

“You need to have that level of quality [in leather] if you’re going to put it on your wrist and qualify it as a daily object,” Wicks said.

He also noted that the Moto 360 is built on everything Motorola has learned over the past few years. The MotoActv, its earlier smartwatch, taught the company how to manage power efficiently. That innovation was passed onto the Moto X smartphone, where Motorola developed technology to listen for voice commands without impacting battery life.

“Everything we learned from Moto X is now in this watch,” Wicks said.

Unfortunately, Motorola wouldn’t reveal more specific details on the smartwatch. We don’t yet know how much it will cost, and it’s not offering any numbers for battery life. We don’t even know how the Moto 360 charges (it doesn’t have a USB port, judging from current renders). Samsung’s Galaxy Gear uses a special case to charge, so I wouldn’t be surprised if Motorola does something similar.