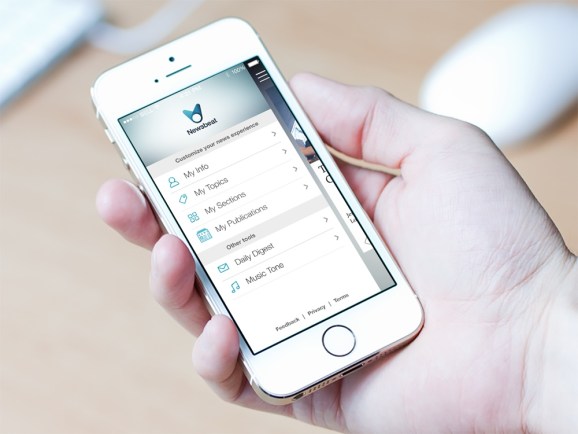 Pandora redefined the way we all listen to music on the go — now the Tribune Company is attempting to do the same for news radio.

Newsbeat, the first new product from the Tribune’s digital innovation arm, is a free iPhone and Android app that lets you listen to custom news radio feeds. Just like Pandora learns your music tastes, Newsbeat figures out what sort of news you like to hear best. And, most importantly, it lets you skip stories you don’t want to hear.

“What most people listen to today [on their phones] are podcasts — this is not a podcast experience, this is a mainstream news experience,” said Shashi Seth, president of Tribune Digital Ventures, in an interview with VentureBeat. “We’re bringing the first experience that’s comprehensive, combining human voice and text-to-speech.”

Newsbeat has access to more than 7,000 stories every day from a wide variety of sources. Naturally, Tribune’s content is featured heavily, but the app also gets stories from other news agencies, as well as some online sources. Stories are read both by humans and computers — though I have to admit, Newsbeat’s computer anchor didn’t sound that much different from some human anchors I’ve heard.

After downloading the app, you need to select a few topics that interest you to get a personalized news stream going. Newsbeat also uses your location to deliver weather and traffic data at the top of its news feeds. The app reads about one minute worth of a story before moving on, but that’s typically enough time to get the gist of what’s going on (and it’s longer than the story segments from most news radio stations).

While Newsbeat sounds ideal for those commuting by car, it’s not quite ready for subway commuters. Seth tells me the app only caches around 10 minutes’ worth of stories, though he noted that the team is considering adding a setting for more extensive caching.

Naturally, Newsbeat relies on ads to make money. Seth tells me ads will run about every 10 minutes, though the company “isn’t so much focused on ads and revenue yet.”

Tribune Digital Ventures is just 10 months old, but it hasn’t wasted any time in making its mark. It was the driving force behind Tribune’s $170 million Gracenote acquisition, which gives it access to a wealth of music data. Tribune Ventures also invested $700,000 in news site Mashable.

Seth, who used to be the senior VP of Connections at Yahoo, as well as the search lead at Google, says he was intrigued by the opportunity to help a giant traditional media company move towards the digital realm. He also pointed out that Tribune has a local sales force that’s used to selling print, digital, and television ads, something few other companies can boast.

At the same time, the Tribune Company has faced serious issues over the past few years, like all traditional media organizations. The Tribune Company filed for bankruptcy protection in 2008, and even though it emerged victorious in 2012, it’s still looking to cut costs across properties including the Los Angeles Times.

“Media in general is going to be challenged … users are changing, habits are changing, tech is changing, monetization models are changing,” Seth said, when I brought up the issues Tribune has faced. “The good news for us is there are parts of our business like the TV side, which produces massive amounts of solid cash flow. The ability to take those assets and cash flow and apply it to what the future holds, I think that’s something noteworthy in the case of Tribune.”

Through a combination of new products, investments, and acquisitions, Seth says he hopes that Tribune Digital Ventures will have a “pretty significant” portfolio in the next five years. Mostly, though, the firm is focused on building up Tribune’s standing in a modern, data-driven media world.

“People want the music they’re interested in, and I bet you news will be the same way,” he said.