SAN FRANCISCO — The Game Developers Conference is the one time every year that the people who make games gather not because their companies are in close proximity to one another while selling products, as at E3 or Gamescom, but to discuss how video games are made and how developers can make them better.

Manveer Heir’s GDC 2014 panel, “Misogyny, Racism and Homophobia: Where Do Video Games Stand?” delivered on Wednesday afternoon, was an exemplary demonstration for not limiting himself to observations of the video game industry’s problems with representative of diverse characters but also laying out concrete solutions with practical demonstrations as to how people can implement those solutions.

A gameplay designer at Mass Effect developer BioWare Montreal, Heir has frequently discussed the issue of race in video games over his nine-year career in the industry. In 2010 he appeared on a GDC panel specifically about race, and he began to notice other, similar conversations taking place on social media and at other video game conferences — and they weren’t just talking about race.

These conversations were also talking about gender issues or representations of the LGBTQ community. “When I listened to these conversations, I noticed there were a lot of the same general trends and issues coming up,” Heir said. That realization was the inspiration for his GDC 2014 panel.

Heir laid out the equivalent of a Social Justice 101 course for the first half of his hour-long presentation, laying out the basic issues for anyone who needed a primer. When people see representations of their race, gender, or sexual preference in any form of media, that representation feeds back into how that individual feels about themselves.

When those representations are characters in a video game, and when stereotypes limit them, like black characters in video games almost universally cast as tough, trash-talking athletes or gang-bangers and drug dealers, the player who identifies with that character sees themselves tarred with the same stereotypes — and this in all likelihood harms them in real life.

“The way we portray characters matters to the world at large and has reaching effects beyond video games,” Heir said. “It impacts how people treat each other in real life, and I really think that this matters. And no, it’s not just video games that cause this. But we do our part, right?”

Women characters do sell games, if the games have budgets 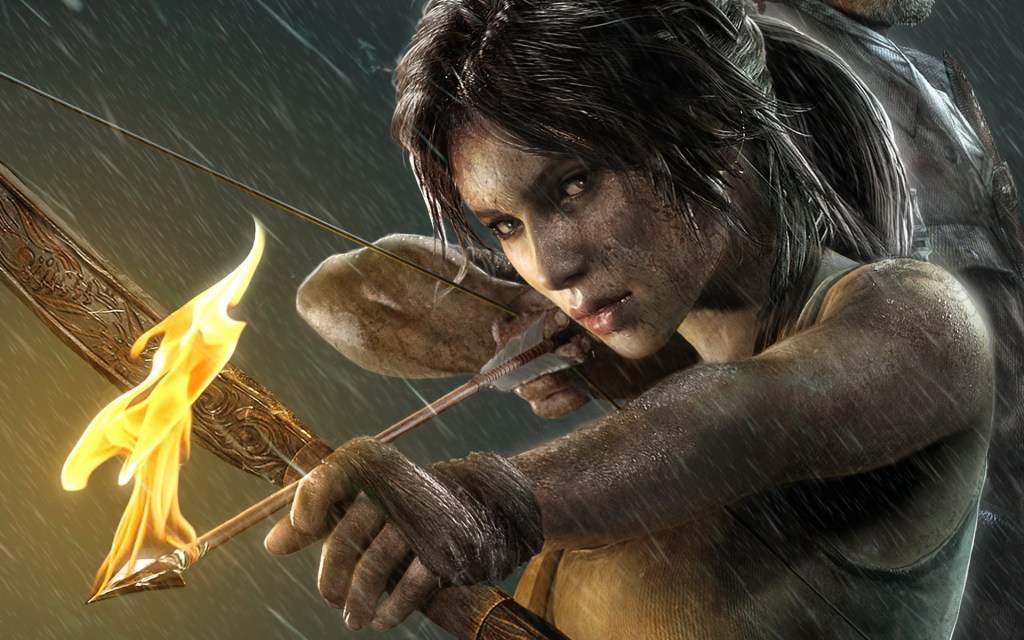 Above: Lara Croft being a women didn’t stop Square Enix from selling over 6 million copies of Tomb Raider (and counting).

The sales fallacy is the most convenient excuse for game developers to avoid addressing the diversity issue because it cuts straight to the profit motive behind triple-A game development. The problem with arguing the sales fallacy is that no one can definitively prove that lesser sales of video games which star female protagonists are due strictly to the fact that those video games have female lead characters.

In fact, there’s no way to prove an argument one way or the other because there are other business factors at play. “Games with only a female protagonist got half the spending of female-optional [games], and only 40 percent of the marketing budget of male-led games. Less than that, actually,” said Heir, quoting Geoffrey Zatkin at research firm EEDAR.

If video games with female lead characters don’t have the budget to produce the high-quality visual effects or other bells and whistles that fans of triple-A games expect, and if the marketing campaigns are only doing one-third of the work to makes consumers aware of the game in the first place, of course those games don’t sell as well.

“The truth of the matter is that we don’t really know that exclusively women characters cause games to sell less,” said Heir. “Marketing departments cherry-pick data and use a self-fulfilling prophecy to say that this is the reason.” 2013’s Tomb Raider reboot, which stars a women in Lara Croft, has sold over 6 million copies according to the game’s publisher, Square Enix.

“[Tomb Raider] was well received by critics as being a high-quality game,” said Heir. That one game on its own isn’t enough to prove that video games with female protagonists can sell just as strongly as any other video game, but it is enough to question the premise that they don’t sell.

If sales really are the deciding factor in whether or not video game protagonists ought to be one race and gender over another, Heir wants publishers to pay attention to the younger video game audience, and where their preferences lie on diversity questions. Heir referenced the results of a survey meant to investigate the question of what younger audiences want, which blockbuster publisher Ubisoft conducted.

“Children of Generation X, so that’s children who are currently in their teens and tweens, expect diversity and inclusivity,” Heir said. “It’s a requirement to them, in large part due to the shifting demographics of their generation compared to previous generations.”

When fans defend the status quo of video game characters, they often fall back on the excuse that it’s just realism. When women in fantasy genres are depicted as weak and helpless, some argue that this is just a realistic depiction of the status women held in the Middle Ages.

Not only may this be historically inaccurate, citing history where a fantasy game is concerned is ridiculous. “This is problematic because it assumes fantasy must be like medieval Europe, which is in itself a trope, a stereotype of the genre. It’s fantasy. You can make the rules literally whatever you want. That’s what the word ‘fantasy’ means!” said Heir, to loud applause.

“I mean, there weren’t dragons in medieval Europe, but that’s really never stopped us from putting them in our fantasy games, right? And I don’t hear a whole lot of people complaining about that.”

Developers have to show, not tell 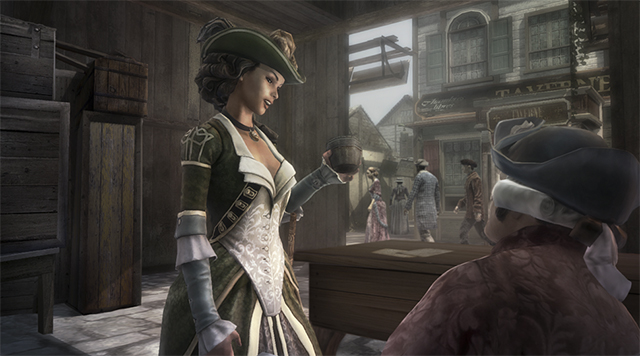 Once developers acknowledge the social science and dispense with the excuses, the solution to addressing the issue of problematic representation in video games isn’t something only the narrative can address. Players need dynamic systems, or rules and mechanics by which they can interact with the moral lessons, such as the racial-passing mechanic in Assassin’s Creed III: Liberation.

Liberation is set in 18th century New Orleans. The main character, Aveline de Grandpré, is not only a women, she’s also biracial, with a French and African heritage. This enables Aveline to utilize aspects of her heritage to blend into different groups. “Racial passing is the way that a member of a racial group works to be accepted as a member of a different racial group, often by acting in a way that is socially accepted by that race,” Heir said.

“In Liberation, racial passing is performed by allowing Aveline to take on one of three personas. When in these different personas, the mechanics of how she interacts with the world changes,” Heir said. When Aveline taps into her French background and passes as a member of the upper class, she cannot free-run or use weapons, but she can charm guards or use bribes to get around them.

When Aveline taps into her African background and takes on a slave persona, she can disappear into groups of slaves by picking up crates, which makes her look like just another piece of chattel that others ignore. Aveline cannot carry her normal weapons in this mode, but she can enlist the aid of crowds.

“That Liberation uses race so prominently, not just for narrative reasons but for actual game design reasons, is extremely exciting and wonderful to see, to me. The player can get a sense of what racial passing is and means, and how it works,” said Heir. “Playing Liberation, you begin to understand what advantages you have as a proper lady, but also what is expected of you and your place in the world. And when you pass as a slave, you start to better understand how subhuman you are considered by others due to your surroundings and treatment.”

Change has to be interactive 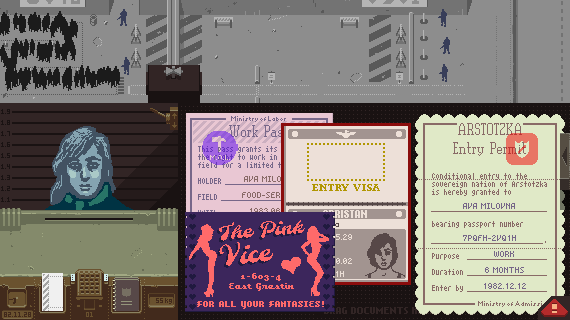 Above: Papers, Please can numb the player to human tragedy, which is the point.

In Papers, Please, the winner of the Seumas McNally Grand Prize at the Independent Game Festival Awards on Wednesday night, the player takes the role of a border guard in a fictional, Soviet-esque totalitarian nation. As people enter the border checkpoint, they present their immigration documents, and the player checks those documents against rules and regulations that change on a daily basis.

“Papers, Please codifies ethnocentrism and nationalism into its gameplay mechanics,” said Heir. As the game progresses, the player is forced to subject citizens from certain countries to more invasive searches than citizens from other countries have to deal with. They also must seize passports from their own citizens when a slate of terrorist attacks hit the country, thereby making the player’s own citizens into prisoners.

It presents moral dilemmas, like whether or not to give someone a break and enter the country if they were only missing a single document or made what is clearly a clerical error on their documentation. Making those morally positive choices constitutes making mistakes, which means the player makes less money, which means they may not have enough funds to support their family and keep them alive.

“The act of playing Papers, Please is not one of sheer enjoyment,” said Heir. “One day, a husband has his papers, but his wife following behind does not. Do you break that family up? Situations such as these continuously pop up, and it makes you think outside the rules. Over the course of the game, I went from following the rules, to feeling like a bad guy for breaking apart families because I followed these rules, and then to feeling so overwhelmed and hurried that everyone just kind of became a number to me, not a person, and I kind of had to get through them as fast as possible.”

“I have no idea what it must be like to work at border control or at an airport. I can’t imagine it’s fun. Papers, Please made me, for the first time, understand why I often feel racially profiled and targeted, and how the system and the rules those agents are under contribute to that, instead of necessarily being a moral failing on an individual agent,” said Heir.

Many GDC panels every year cite problems with the industry, and that observation is important, but accompanying those observations with demonstrations of how developers have addressed those problems through game design can turn a panel about grievances into a panel about finding solutions.

Heir’s assertion that video game developers should address issues through mechanics, not narrative, and the example of his experience with Papers, Please, charts a forward path which other developers can follow.

“The game made me actually see things from a different perspective,” Heir said. “This doesn’t happen in a game where the discussion of ethnocentrism and nationalism doesn’t let the player interact with the system in interesting ways, to find dynamic reasons why there are issues such as racial profiling. It doesn’t happen in a game where this just remains in the narrative layer.”