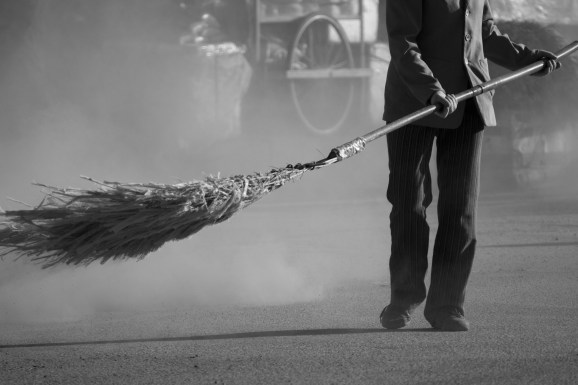 China’s urban sprawls are famously choked with smog. Residents are frequently subjected to pollution levels that are “barely suitable for life.”

The government has adopted an unorthodox approach to dealing with pollution in some of the worst-affected areas. The deputy minister of environmental protection, Zhai Qing, announced this week that drones were recently dispatched to Beijing and neighboring provinces Shanxi and Hebei to monitor levels of air pollution and hunt down illegal polluters.

State-run publication China Daily reports that the surveillance drone can cover 70 square kilometers of land in its daily two-hour flight. The aircraft, which are equipped with infrared devices and can operate at night, have helped the ministry “resolve over 200 environment-linked cases,” according to the deputy minister.

The ministry’s Yang Yipeng said in an interview with the South China Morning Post that much of the pollution comes from steel mills and cement factories.

“You can easily tell from the color of the smoke — black, purple, and brown — that the pollution is over the limit, because if smokestack scrubbers are operating properly, only white smoke is emitted,” said Yang.

Yang explained that the drones are ideal for surveillance missions as they are barely noticeable. In the past, the ministry would sent out inspection teams to Beijing and the surrounding areas. These inspectors were often intercepted by local leaders and deliberately guided away from the pollution hotspots.

“The drones, on the contrary, can catch them off-guard as few people notice their existence,” Yang added.

The Chinese government is also experimenting with UAVs to clear smog during air pollution emergencies, according to Ma Yongsheng, an aviation official who is a delegate to the National People’s Congress.