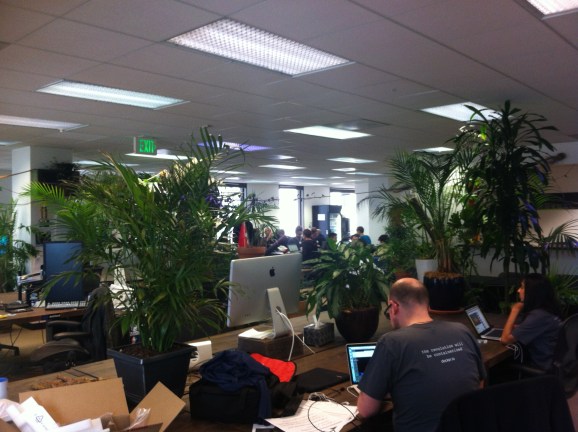 The Docker office in San Francisco.

A couple of months after announcing a $15 million funding round, Docker has finally released its first commercial service based on the software it open-sourced last year.

It’s not a huge product — it’s a service to let developers privately store code in a “container” that can be easily moved from one server to another — but it is one of many shiny toys on the way from Docker following its pivot last year.

There have been about 100 signups for the new service since the release yesterday, Docker chief executive Ben Golub said in an interview with VentureBeat. It might not sound like much, given that prices start at $7 per month, but it’s the first step on a long journey.

The company last year shifted away from being just another Platform as a Service (PaaS) on top of which developers could build and run applications. The company shared the underlying “container” code enabling the PaaS. Companies small and large have adopted the technology to launch applications, and cloud providers have announced support for it.

All the while, Docker has been planning applications to support the container technology, which also goes by the name Docker. And as those services get released, the company can step into a much more distinct role in the world of infrastructure, enabling more efficient cloud computing and less work for developers.

No wonder Docker felt willing to open up its office today to hold a hackathon and throw a little celebration. It’s a brand new day.