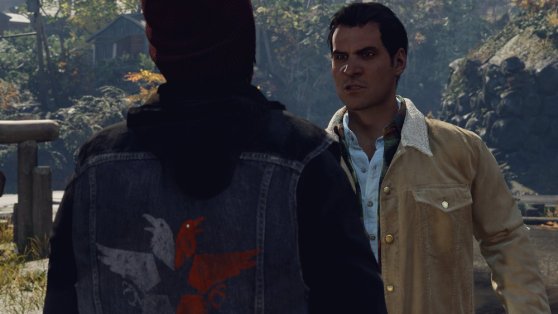 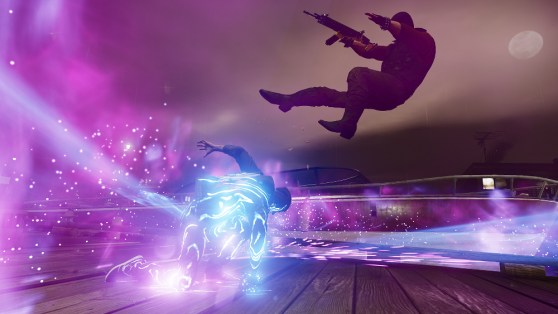 To recharge Delsin’s smoke ability, you locate sources of smoke in the area, such as exhaust vents, trash-can fires, and destroyed cars. Absorbing powers from things around you is a brilliant concept, and it completely revitalizes the normal firearm/ammunition dynamic found in most action games. 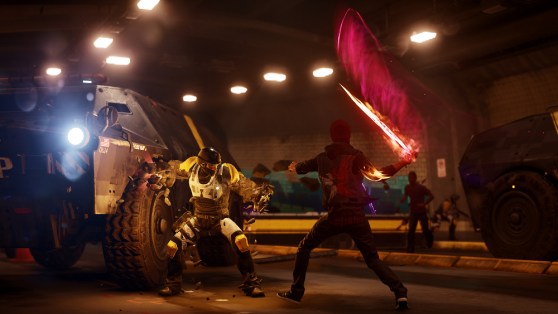 Above: Delsin can reload his powers by drawing on smoking cars and neon signs.

Eventually, Delsin meets other Conduits and absorbs their powers, but they’re too much fun to thoroughly spoil in this review. OK, I’ll mention one: Delsin’s neon powers can vacuum up Seattle’s brightly lit signs and advertisements and turn them into laser blasts, once again enabling you to utilize the city to outfit your character. You’ll never look at Times Square or downtown Tokyo the same way again.

Halfway through, Delsin’s neon ability completely changes the look of Infamous: Second Son, with brilliant scorch marks and bright lights trailing the neon-infused hero. You can even run straight up walls, a form of transportation that is even better than carjacking a vehicle in Grand Theft Auto V. You can’t use vehicles in Infamous, but who wants to drive when you can practically fly? 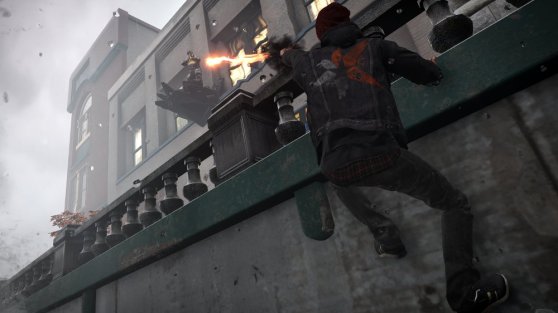 Above: Delsin can easily climb any building, but abilities you gain later let him run or fly straight up the sides.

A city under siege

Delsin’s journey to Seattle becomes a liberation story once his overwhelming powers meet the hostile D.U.P. forces. The D.U.P. has blanketed the city with checkpoints, holding pens, and guard towers, and they’re constantly monitoring the city for Conduit activity. As Seattle’s liberator, your goal is to disrupt their operations in a number of clever ways.

While you can always head directly to the next story mission on the map, you’ll find that it’s more satisfying to test out your new powers by sticking it to the Man. Each section of Seattle contains a heavily guarded mobile surveillance unit, which you can destroy to earn energy shards that strengthen your existing powers. You can also spray paint inspirational (or upsetting) graffiti around town, locate audio fragments through your cellphone, expose undercover D.U.P. agents, and destroy surveillance cameras.

The variety of activities is similar to collecting fragments and sea shanties in Assassin’s Creed IV: Black Flag, but in Infamous, they all feel like steps on the way toward freeing the people of Seattle. You can even hunt down flying drone copters, each of which contains an energy shard. Once you complete the main game, the wide-open and beautifully rendered city is still there for you to explore, and shutting down the D.U.P. for good will add hours to the its overall running time. 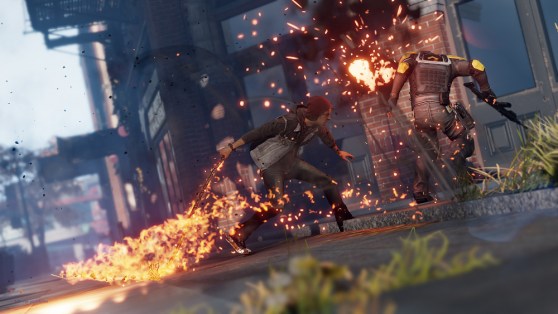 Above: The D.U.P. are everywhere, and every installation you take down will help liberate the citizens of Seattle.

Whenever you battle the D.U.P., you have a critical choice to make. Do you approach each situation violently, slaughtering innocent civilians who get in your way, or do you attempt to “do no harm” by binding enemy soldiers and letting them live? For each life you spare or snuff out, you’ll contribute to your karma points, setting you on a path toward becoming either a benevolent savior or a villainous murderer. In other words, do you want to be Professor X or Magneto?

Not only do your choices change the storyline dramatically, but they’ll also unlock new story missions at critical junctures. I’ve played the game both ways, and after beating Infamous as a relentless do-gooder, I tried it again as an evil maniac. The feel changes completely when ethics don’t restrain you. Instead of aiming for your opponents’ feet to tie them up, you can aim for the head and watch them explode. Citizens will curse you if you’re rotten or cheer you if you’re their hero, and for extra karma points, you can annihilate drug dealers (good) or street musicians (bad).

Certain powers will only be available once you’ve reached a particular karma level, which means you’ll have to replay the game to try them all. For example, if you play as a hero, you’ll be able to slow down time and disable enemies with lasers while they float in a stasis bubble blast. If you’re a villain, you can fire choking smoke projectiles that will painfully suffocate your enemies. Thanks to the divergent sets of cutscenes, missions, and abilities, the karmic pathways in Infamous really do feel like two separate games in one. 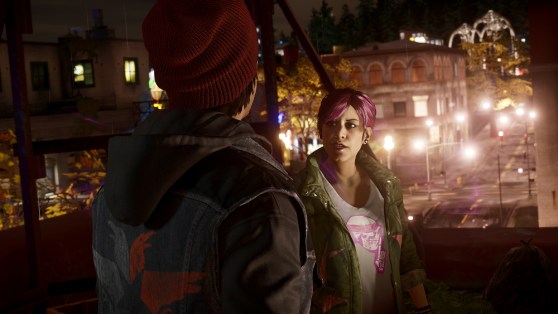 Above: Additional characters will follow your lead by turning toward the path of good or evil.

Infamous: Second Son is so spot-on in its concept and execution that the only complaint I have is that I wanted it to keep going. The main story will only take about eight hours to finish in your first playthrough, but you can play it again with a different karma path and spend extra time destroying the D.U.P. in Seattle through side missions. Still, a longer story with even more characters and special abilities would have been even better.

Infamous does include a bonus pack of missions called Paper Trail that introduces a new character with a unique power, but it’s completely optional. We hope that Sucker Punch Productions continues to support Infamous: Second Son with more content, because the Conduit’s abilities are refreshingly creative and the world is wonderfully detailed.

Infamous: Second Son is a single-player game, so you won’t be able to team up with other Conduits online, racing around the city and fighting the D.U.P. Although Grand Theft Auto Online demonstrated that multiplayer open-world games are possible, Infamous: Second Son is a tightly crafted single-player experience with no room for X-Men-like squads of superheroes online. That’s too bad, because the rare combination of Conduits during a few climactic battles is sublime.

I’d love a massively multiplayer Infamous game where everyone can run up the sides of buildings and cause massive explosions, but for now it remains an impossible dream. Still, as a single-player game, Infamous is a spectacular showpiece for the PlayStation 4. 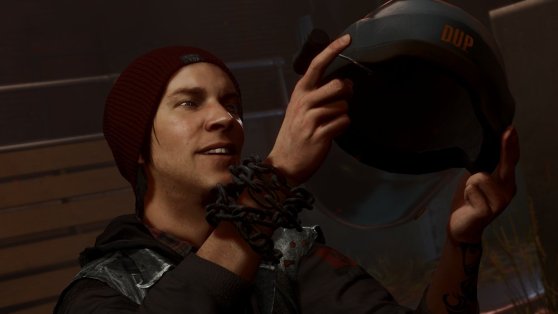 Above: When you get to try out Delsin’s stylish superpowers, you’ll understand why he looks so happy.

Infamous: Second Son is a phenomenal game, and a must-play for any PlayStation 4 owner. If you don’t own a PS4, it’s worth buying one just to play Second Son — that’s how good it is. If you’re looking for an open-world game with lots of side quests, a satisfying story told through groundbreaking animation, and an arsenal of one-of-a-kind superpowers, Infamous: Second Son has it all.

Delsin’s devilish grin says everything: It feels really good to play with this kind of power.

Infamous: Second Son is available for PlayStation 4 on March 21, 2014. The publisher provided GamesBeat with a PlayStation 4 retail copy of the game for the purpose of this review.