The future of Silicon Valley’s technological prowess may well lie in the war-scarred mountains and salt flats of Western Afghanistan.

United States Geological Survey teams discovered one of the world’s largest untapped reserves of lithium there six years ago. The USGS was scouting the volatile country at the behest of the U.S. Department of Defense’s Task Force for Business and Stability Operations. Lithium is a soft metal used to make the lithium-ion and lithium-polymer batteries essential for powering desktop computers, laptops, smartphones, and tablets. And increasingly, electric cars like Tesla’s.

The vast discovery could very well propel Afghanistan — a war-ravaged land with a population of 31 million largely uneducated Pashtuns and Tajiks, and whose primary exports today are opium, hashish, and marijuana — into becoming the world’s next “Saudi Arabia of lithium,” according to an internal Pentagon memo cited by the New York Times.

The USGS survey report on Afghanistan that detailed the findings also noted that, in addition to lithium, the country also contains huge deposits of iron ore, gold, cobalt, copper, and potash, among many other valuable minerals.

“The mineral wealth there is astonishing,” said professor Michel Chossudovsky of the Montreal-based Center for Research and Globalization, who has written extensively on Afghanistan.

A conservative estimate of the riches is $1 trillion. In some circles, it’s as high as $5 trillion. 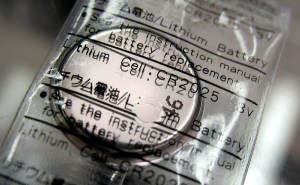 Above: A typical lithium “button” cell found in many small electronics.

In Silicon Valley and beyond, tech companies like Apple, Google, Amazon, Microsoft, Hewlett-Packard, Samsung, Sony, and Tesla rely on continual, and uninterrupted, access to lithium, as lithium-based batteries are the primary power storage devices in their mobile hardware.

Without these batteries, MacBooks, iPads, iPhones, Kindles, Nooks, Galaxy IIIs, Chromebooks, and, yes, Tesla Model S cars would be largely worthless. If forced to use older, nonlithium batteries, their battery lives would certainly be much shorter.

The world’s current lithium heavyweight is Bolivia, the biggest exporter of the element. There, in the swamps and marshlands of the southern region of the country near where the borders of Chile and Argentina meet, are the biggest deposits.

Canada, China, Australia, and Serbia also have varying amounts of lithium, but not as much as Bolivia.

Enough to last a lifetime

Depending on who you talk to, the current lithium global reserves are adequate for at least another generation of lithium-ion battery manufacturers to produce them.

But not everybody thinks so, and some say the light metal compound may someday run dry. That could in turn spell trouble for any company whose business depends on light and portable mobile electronics — unless someone comes up with an alternative to lithium batteries before then.

According to Lithium Americas, a Canadian lithium-mining company with significant business interests in Argentina, lithium demand will more than double in the next 10 years, while lithium prices have nearly quadrupled during the same timeframe.

Tesla, for its part, is in the process of investing up to $5 billion to build its own lithium-ion Gigafactory in Texas, a plant capable of churning out 500,000 expensive battery packs a year by 2020 for its line of zero-emission, all-electric cars. Above: Tesla predicts that its “Gigafactory” will produce more lithium batteries (by capacity) in 2020 than the entire global production of such batteries in 2013.

A Tesla spokeswoman did not return calls seeking comment.

As a potential source to feed that demand, enter Afghanistan.

“At some point, if present trends continue, demand [for lithium] will outstrip the supply. And again, at some point, the market for lithium-ion could get so big that it actually affects the supply chain,” said Donald R. Sadoway, a professor of the Materials Chemistry Department of Materials Science and Engineering at MIT.

Looking at Afghanistan, Sadoway says the war-ravaged nation, which has no effective mining infrastructure in place, may well be attractive to the world’s mining outfits.

“In this regard,” Sadoway, one of the world’s foremost experts on energy sources, says, “the deposits in Afghanistan could be important.”

Andrew Chung, a venture capitalist with Khosla Ventures in Silicon Valley who has invested in multiple startups producing alternative batteries, says lithium-ion batteries are limited in their lifetime cycles, scalability, and cost. Despite this, Chung says, he can understand how the untapped reserves of Afghan lithium are now an increasing focus.

“It is an issue of the supply chain, whether it’s Afghanistan or other [countries]. There is a finite supply, and lithium-ion will continue to be the [power] choice for the next decade,” Chung said.

Some of the Valley’s biggest and most powerful tech companies either declined to comment for this story or never returned calls. But they didn’t deny the importance of lithium-ion batteries.

For instance, an Apple spokesperson declined to comment for this story but provided VentureBeat with a 2014 “Suppliers List” of the 200-plus vendors it uses to produce its products. A related post made the Cupertino, Calif.-based company’s commitment to lithium batteries clear, at least in the short term.

Sony Energy Devices Corp. invented the lithium-ion battery in 1994. It was hailed as a breakthrough, providing longer battery life and without the “memory effect” that gradually reduced the effective capacity of previous types of batteries.

Since then, companies have gradually refined lithium battery technology but have not succeeded in moving beyond it. Indeed, early Tesla cars are actually powered by large packs of industry-standard lithium-ion battery cells — the same type of cells found in many laptop batteries.

And here is where it gets interesting. 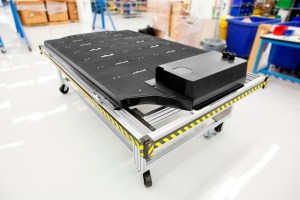 Above: The custom battery pack Tesla uses for its Tesla Model S. Inside are hundreds of lithium cells.

If electric car manufacturers begin ramping up production of lithium-ion battery-powered cars, the global demand for lithium will skyrocket. This could potentially come about at the same time for increasing demand for handheld consumer goods like tablets and laptops, Chung said, thus creating a perfect storm.

“So you want to start looking at other sources producing it with current supplies being called into question, if we move more toward production of electric cars,” Chung said.

Which is why, increasingly, eyes are turning to Afghanistan and its new purported lithium reserves, a country long referred to as the “graveyard of empires.” The U.S. invaded Afghanistan after the terror attacks of Sept. 11, 2001, and according to iCasualties, 2,315 American servicemen and women have been killed there.

Analyst Jay Jacobs of Global X Funds in New York, which has interests in lithium mining, said demand for the compound is growing, and that “there are two regions that have been revealed to contain huge lithium reserves: Afghanistan and Bolivia.”

William Tahil, a respected lithium expert who lives in France and is the general director for Material International Research, argues that lithium deposits in Bolivia will at some point be depleted.

Jacobs was sanguine about safely extracting lithium from Afghanistan. He said political risks there were considerable.

“With that being said, should there be a substantial and sustained increase in demand for lithium, lithium miners may become increasingly interested in the country as it has an abundance of the resource,” Jacobs said.

It was the Soviets who first discovered the country’s deposits when they invaded in 1979. Soviet geologists began mapping Afghanistan’s lithium, gold, and potash fields but abandoned their efforts after the former communist superpower pulled out of the country in 1989.

But with a weak and corruption-plagued “central government,” Afghanistan is now ripe for the picking, Chossudovsky said. Indeed, the country is still very much divided into fiefdoms, with the Muslim fundamentalist Taliban, warlords, and drug traffickers controlling large swaths of the country — and using violence to advance their interests.

“There’s no question the mining companies will go in there. No question. There’s no real functioning government there to reap the foreign investment of the mineral deposits. This makes it all the more enticing to the mining companies because nobody in the government of [President] Hamid Karzai will be regulating the bonanza of lithium, so they can do what they want,” he said. 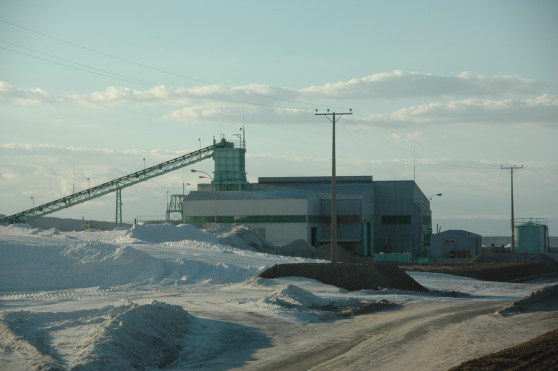 Above: A lithium processing plant in Chile. Lithium is typically refined from vast piles of mineral salts.

For its part, the U.S. government, which helped locate the lithium deposits using flyovers with a sensor-filled Lockheed P-3 Orion and teams of geologists fielding soil samples, knows a potential gold rush when it sees one. And it has no intention of being left on the sidelines. Especially since the Chinese are now — and quickly — making deals with Afghan pols for mineral rights to copper deposits.

The USGS did return multiple calls seeking comment. Nor did the Pentagon.

Despite what some say are the shortcomings of lithium-ion batteries, venture capitalists and investors continue pouring money into them. Amprius, a lithium battery maker based in Sunnyvale, Calif., snared a $30 million infusion round of investor cash in January.

Over at the Afghan embassy in Washington, D.C., the Afghans are licking their lips at the potential lithium and mineral windfall despite the country’s continued conflict with a resurgent Taliban. What this may portend for the impoverished and war-torn nation is anybody’s guess. But the Afghans are playing up the finds — or they were, until recently.

“In recent years, headlines from the Afghan mineral sector have competed to outdo each other in scale: from the landmark $3 billion Chinese investment in the Aynak copper concession to the astounding survey work of the U.S., Afghan, and British Geological Services estimating anywhere between $1 trillion and $3 trillion in mineral potential, to the historic $11 billion deal now being finalized with an Indian consortium for the Hajigak iron ore concession,” said a posting on the Afghani Washington DC website.

Afghanistan’s ambassador to the U.S., Eklil Hakimi, presided over a press conference at the Afghan embassy in Washington, D.C., on March 10, where he talked about the untapped deposits, along with reps from the USGS and other U.S. politicians.

But Hakimi, through a spokesman, told me he simply didn’t have the time to talk.